And what’s a butterfly? At best, He’s but a caterpillar, drest.      John Grey

And there is one species of caterpillar that dresses better than any other – the Camouflaged Looper, Synchlora aerata. This is the unusual larva of the Wavy-lined Emerald Moth (okay, the quote isn’t quite right in this case…).

Can you see the caterpillar?

Every time I am out in the garden I always take a few moments to just look around for interesting critters. As I watched a few pollinators on the Blazing Star (Liatris sp.) yesterday, I noticed something move. But there was nothing there…then it moved again, and I knew what it was – a Camouflaged Looper. This caterpillar has the unusual habit of disguising itself by cutting plant parts from the flowers on which it is feeding and sticking them onto its dorsal surface. The larvae feed on a wide variety of plants although I have most often found them on Blazing Star, Black-eyed Susan, and a few other yellow composite flowers. 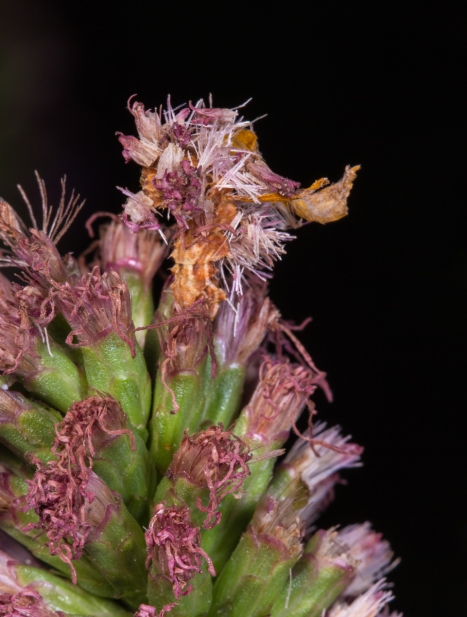 Camouflage Looper and its “costume”

In a 1979 article in The Journal of the Lepidopterists’ Society, Dr. Miklos Treiber, of the University of North Carolina, wrote about the camouflage abilities of these inchworms. The larvae cut off flower parts, seeds, and even entire flowers, and attach them to needle-like projections on their upper body surface. In a series of experiments he removed their floral covering and they immediately  began to replace the camouflage.

Furthermore, when moved from one flower type to another (purple to yellow in his case) the larvae began to replace their old camouflage with flower fragments from the new plant. 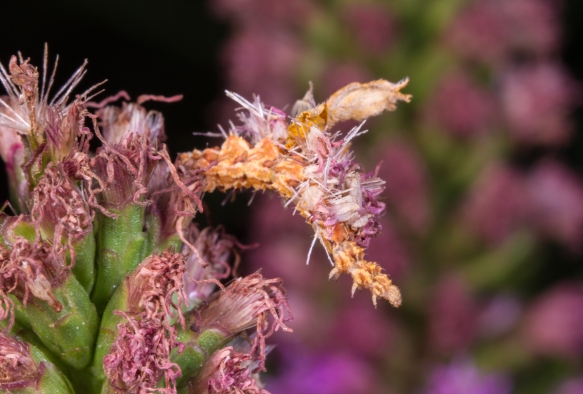 He also noted that the fragments are passed through the mouth of the larva before being attached and that a mucilaginous substance (aka “caterpillar spit”) was secreted by the larva onto the fragments. He speculated that this substance seems to play a role in maintaining the freshness in these fragments. The caterpillars also maintain the effectiveness of the covering by replacing withered floral parts with fresh ones.

Camouflaged Looper looks like plant debris when not on matching flower

Dr. Treibe hypothesized that this looper’s ability to change disguises allows it to have a much more varied diet than some other caterpillars because it isn’t restricted to eating only those flowers or plant parts that it resembles in appearance. And I noticed that even when it is moving between flowers and is on a stem, leaf or other background, the caterpillar simply looks like some plant debris rather than a potentially tasty meal for any passing bird.