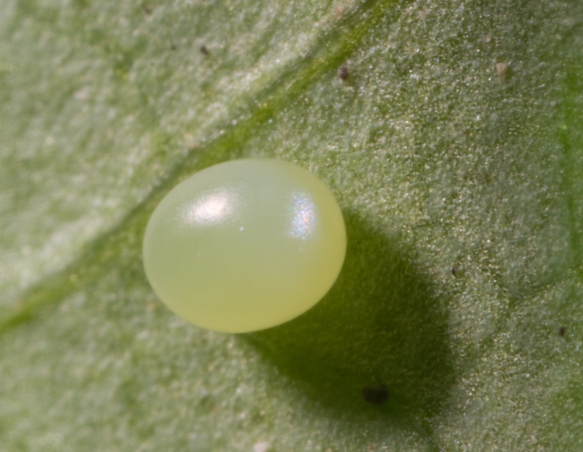 It seems like just yesterday they were just a gleam in their parents multifaceted eyes, and then, before you know it, they are off to pupation college. I reported on some egg-laying of butterflies and moths in recent posts and decided yesterday to go out and look for the young ones out in the garden. It has been about three weeks since I photographed the eggs. Most lepidopteran eggs hatch within 3-5 days after being laid and many species of butterflies and moths have larval stages that last about two to three weeks. So, I expected to find some caterpillars that were in the mid to late instar stage of development. I did find a couple, and while I can’t be sure they are the ones from the eggs I photographed, they probably are from eggs laid about the same time.

The species I nicknamed Little Spike (a Snowberry Clearwing Moth larva) has become more proportional to its caudal horn (tail spike) and changed color. I cannot find any reference as to the function of the tail spike found on most sphinx moth larvae, other than one tongue-in-cheek mention that it must be to scare gardeners. Indeed, there is a common misconception that these types of caterpillars can sting you with that horn (they cannot). Perhaps it is similar to the angled stripes that many species have along their sides and serves to help break up the typical caterpillar outline or shape by blending in with leaf veins, petioles, etc. Notice that this larva does exhibit a form of counter-shading, with the color becoming fainter as you move from the bottom to the dorsal side of the body. Since this species often feeds on the underside of the light-colored leaves of honeysuckle plants, this color scheme makes sense, especially when viewed from below the leaf, causing the caterpillar to blend in more with its surroundings.

Next I looked over the elm sapling where I had found the Question Mark or Eastern Comma eggs (they are identical). It turns out they were laid by a Question Mark. The caterpillar is a rather fierce-looking larva armed with branching spines (scolia). I had to check the field guide to make sure it is not one of the so-called stinging caterpillars (like Io Moth or Saddleback Caterpillars) whose stiff spines contain venom which can cause severe irritation when touched. This species is, indeed, harmless, but the spines undoubtedly serve to protect it from many invertebrate predators and perhaps deter others.

This particular caterpillar also had an interesting behavior when disturbed. It arched its body in a tight curve and stuck out the posterior end. I have seen some caterpillar species do this that can exude distasteful chemicals from their anus, or that have fake heads on their backside. I’m not sure if this is a species level behavioral trait or what the function might be if it is, but anytime I am faced with an array of sharp spines, I think twice before grabbing.