As I mentioned in my last post, I had to leave Cades Cove about noon, and was wondering if my bear mojo was failing me and I would be skunked for bears on this trip (you may recall I am a big fan of bears and enjoy observing them). But, a couple of miles outside of the valley I came across a so-called bear jam. It was attended by a ranger who was trying to keep visitors that were out of their cars from getting too close to the bear and keep those in their cars moving so as not to clog the road. He was having more success with the first objective and the lone bear was foraging up a steep slope and moving away from the road so photo opportunities were limited. Still, it was good to see one at last, so I contentedly continued on through the park. My plan was to drive through the primary road in the park which puts you out in Cherokee on the North Carolina side. Many of the trees had already lost most of their leaves, but there were still lots of spots with beautiful fall colors.

I was intrigued by the splashes of color I saw down some of the steep wooded slopes. The day was overcast and the combination of dark tree trunks with bright yellows and reds looked like an inviting photo op. I stopped at a pullout that looked promising and got out to photograph the scene. As I am looking down-slope and composing a couple of images, another car pulled in and I saw a guy point at something. 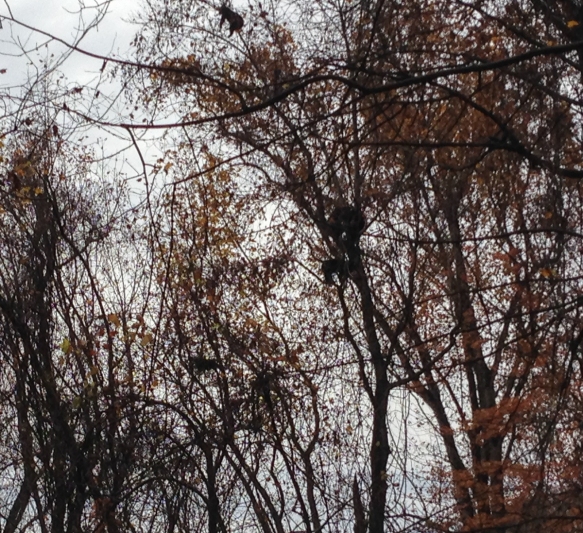 Look up and what do you see? Three blobs in a tree (the fourth bear is just out of the image to the upper right)

He asked what it was and when I looked up I was thrilled. It was a bear! Actually, there were four bears, and they were high off the ground in the tops of two trees. Surprisingly, the other car drove off leaving me alone with the bears. The mother bear was feeding on wild grapes which were abundant in the tree tops on many of the steep wooded slopes along the roadway. The three cubs were all lounging, presumably napping, as they barely moved at all in the 25+ minutes I spent with them. 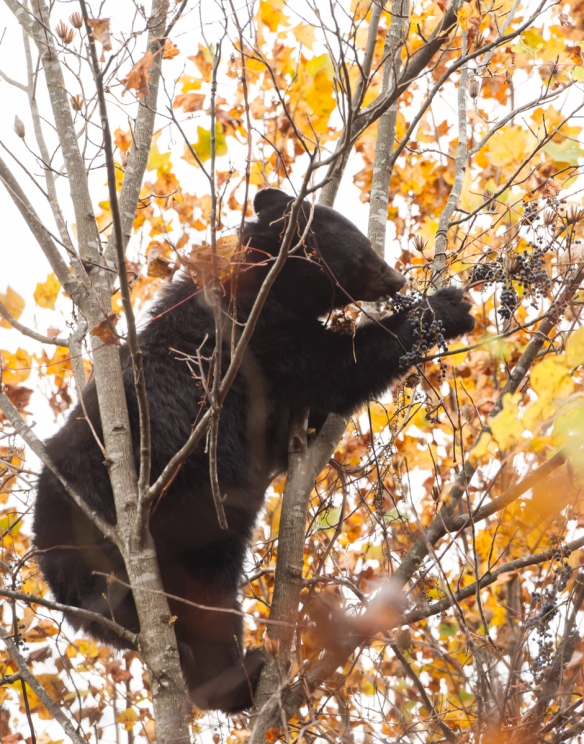 The large female climbed higher while I watched and was probably 60-70 feet off the ground in the top of a Tulip Poplar when I set the camera up with my long kens to photograph her. Her cubs were almost as high and had balanced themselves in various ways amongst the tangle of branches and vines. 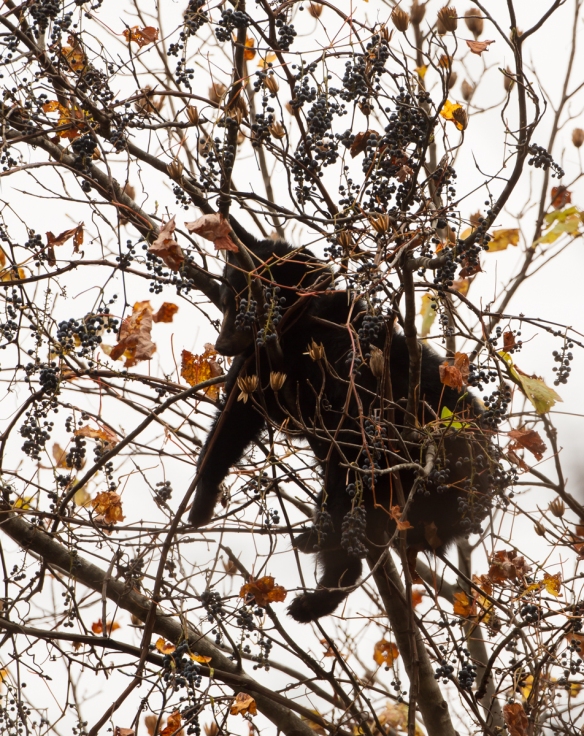 When I looked through the lens, I could see why they had bothered to make the climb – the vines were loaded with clusters of grapes. Black Bears are opportunistic feeders and take advantage of the seasonally changing food availabilities. In autumn, nuts, berries and fruits of various sorts become a critical component as they feed voraciously in preparation for the winter hibernation.

I was impressed by the quantity of grapes the mother bear was able to devour. For the twenty-five minutes I watched, she was constantly feeding, pausing only occasionally to reposition herself on her precarious-looking perch and to grab and pull some more grape-bearing vines toward her. Here is a short video clip of her feeding…

The audio is from all the people that stopped once I set up the telephoto lens pointing skyward – a sure sign there must be something of interest to see. 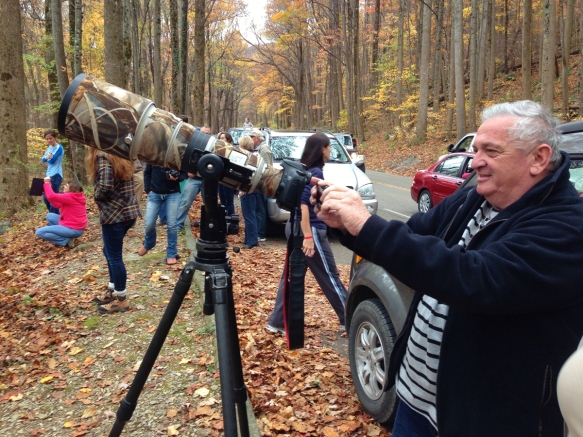 If you listen carefully at the very end of the video, you can hear this gentleman thanking me for allowing him to photograph the bear as seen on the LCD screen of my camera using his iPhone. Many of the people that stopped and asked me about the bears were surprised that the bears were up in a tree feeding. It reminded me that this was the third time I have seen bears in the Smokies in trees eating grapes. I have also seen bears in other areas eating wild cherries in tree tops and know that they feed on acorns as well. Climbing to reach these foods gives bears an advantage over competing deer, foxes, and coyotes, who must wait for the fruits and nuts to drop before they can eat them. 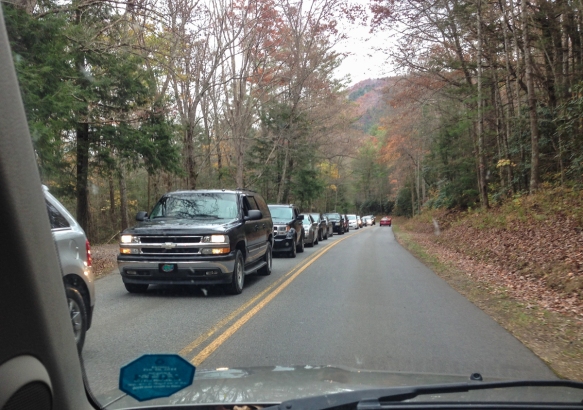 Cars stalled in the bear jam I unfortunately helped create

The scene started to become a bit chaotic with more and more cars stopping so I packed up the gear and managed to get out before gridlock set in. I muttered my apologies to the bears for drawing attention to their feeding, but, they really didn’t seem to mind. 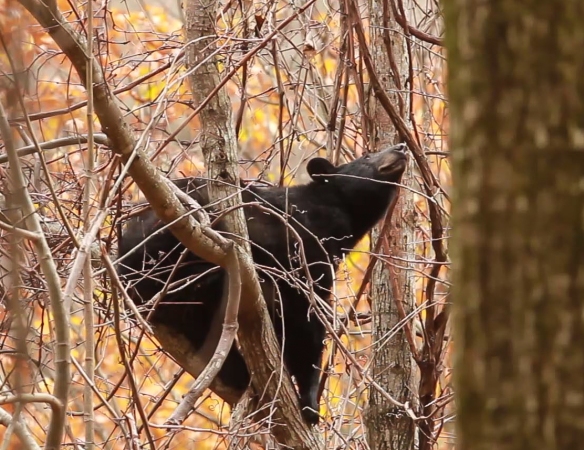 About twenty minutes later I came across another line of traffic, and, amazingly, there was another bear up in a tree feeding on grapes. This was a slightly smaller bear than the first one, but, as I soon found out, it was another mother bear.

As the gathering crowd watched, a young bear who had been sleeping at the base of the tree (but was hidden from view) started climbing the trunk toward the other bear. It climbed to a horizontal limb and began grabbing vines to pull grapes within reach. It ate a few and then walked back and forth a couple of times along the skinny limb which was about 30 feet above the ground.

The young bear looked like a high wire artist as it nimbly moved from branch to branch, and only once caused the crowd to gasp as it slipped before grabbing a limb. I noticed the adult bears both used their teeth as aids in climbing and shifting position up in the smaller branches. The young bear tended to be on larger limbs and did not show this aptitude as yet.

With increasing traffic (the line of cars coming in the opposite direction stretched about 3 miles when I left) and shortened tempers on the part of many drivers, I decided it was time to leave. As I was packing up, both bears came down the trunk and headed down slope.

So, in a little over an hour I went from no bears to seven bears, with six high up in the trees. Guess the mojo hasn’t left just yet.