I have seen a bounty of hawks the past few days here in the woods. I got close to a Red-shouldered Hawk sitting out on a snag in the meadow the other day as I was carrying some firewood in the wheelbarrow. The next day, a Cooper’s Hawk blew by me on the deck as it chased a woodpecker.  And while I was doing dishes the other afternoon, I looked out the window to see a Sharp-shinned Hawk land on a branch near one of my feeders, probably hoping to catch some small bird unaware. So, it was no surprise this morning to see a pair of Red-tailed Hawks out on the power line. I was sitting near the garden hoping to get some photos of birds in the morning light when the pair flew over the trees a few hundred yards away, calling their unmistakable shriek, before soaring off over the forested hillside. But they soon returned. 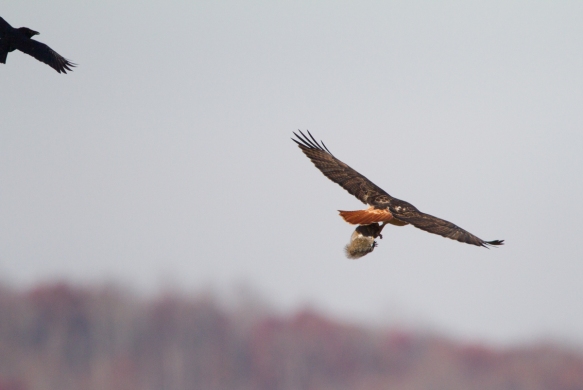 I heard some crows calling their special mobbing call which I hear so often here and then saw shadows coming across the meadow. I glanced up and saw a Red-tailed Hawk being chased by a crow down the power line right-of-way. The hawk appeared to be carrying something in its talons and I managed a few quick shots before it disappeared into the woods. In the quick view I had, it appeared as though the hawk was carrying a squirrel due to the size of the prey, and what appeared to be a bushy tail dangling beneath. Looking at the camera confirmed the prey was, indeed, a Gray Squirrel.

Red-tailed Hawk with Gray Squirrel in its talons

As the hawk carrying the squirrel disappeared, I heard another Red-tail Hawk scream from behind and looked up to see the probable mate of the hunter flying in to perhaps join it for a meal. Online sources say that Red-tailed Hawks sometimes hunt in pairs, with one hawk chasing the squirrel around to the side of a tree where the other waits. I have seen Red-tails capture squirrels on several occasions and watched them chase and miss them as well. Several years ago I found a couple of squirrel skins on the ground in the forest over a period of a few months. The skins were turned inside-out, like when you pull off a sock by grabbing the top and pulling it down your foot. One day while walking my dog, I saw a Red-Tailed Hawk fly up off the ground and my dog went over and found such a skin. Apparently, squirrel skin is pretty tough so some hawks will remove it before tearing at the meat. Given the numbers I see in the woods around here, I imagine the hawks will have squirrel for dinner again soon. 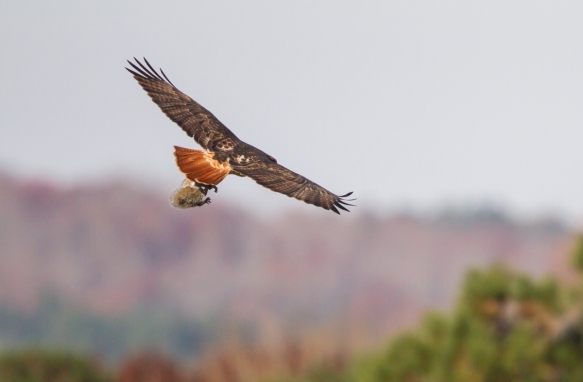 The hawk just before it disappears into the trees

6 thoughts on “A Heap of Hawks”