A good river is nature’s life work in song. 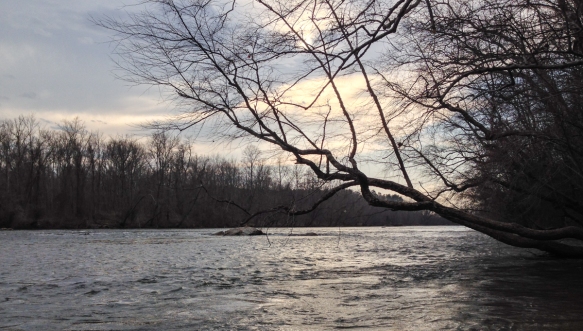 There is, indeed, something magical about a river. It is the lifeblood of the land. It carries your mind to places yet undiscovered and brings surprises to your doorstep. It is a gentle, reassuring friend in its constant murmurings, or a raging threat to be respected and sometimes feared. And, like any body of water, it is a haven for hidden life. On a hike along the Yadkin River this past weekend, I came upon signs of abundant life that had left the river to risk exposure in the world above. 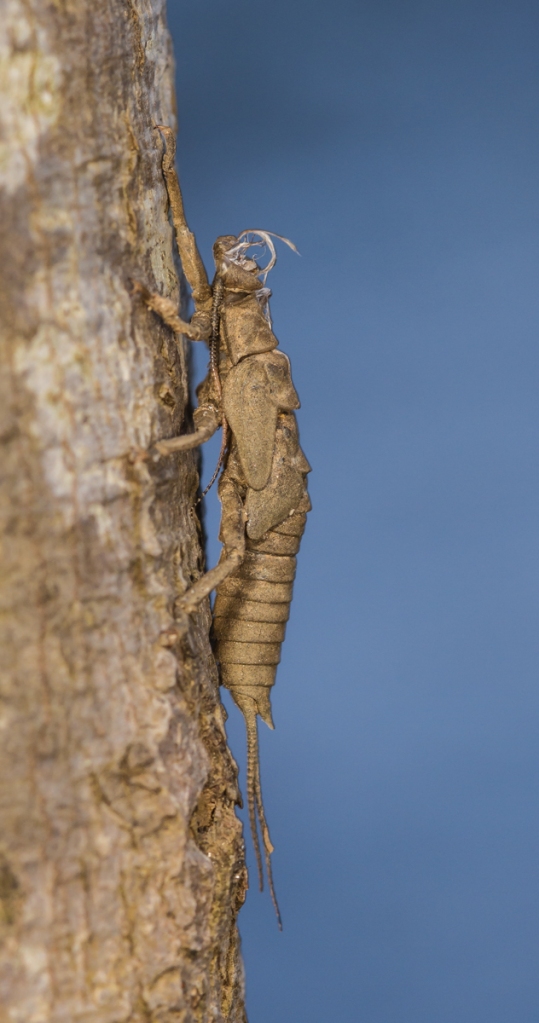 Stonefly exuviae on tree trunk along the Yadkin River

The tree trunks and rocks along the river were adorned by hundreds of stonefly exuviae. Such a strange word, exuviae, almost otherworldly, as were the dried, lifeless forms on the river bank. Exuviae is derived from the Latin, exuere, meaning to remove. It is defined as the cast off skins or other coverings of animals. This shed skin shows the typical immature stonefly body plan – a somewhat flattened shape to enable it to better cope with the currents, stout legs with two claws at the tip, and two tails (cerci). 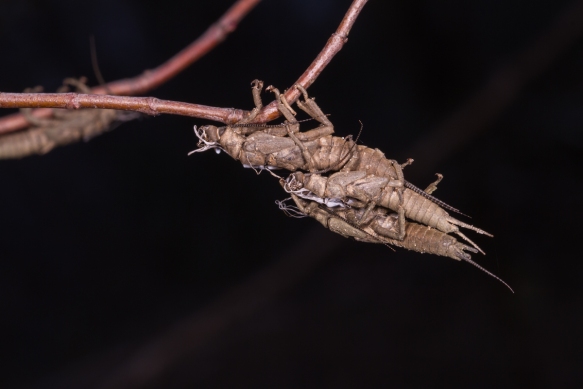 Stonefly exuviae piled on top of one another

The exuviae were thick on some tree trunks and even piled on top of one another in a few places, as if there had been a mad dash to escape the rushing river. I am not sure which species this is, but they all looked alike, so I imagine there had been a mass emergence of the aquatic immatures of a single species over a short period of time. This is typical behavior for stoneflies and mayflies as they emerge to transform to the adult form and mate. Fly fishermen are well aware of the so-called “hatches” of various species of aquatic insects and have developed an entire artistic culture around mimicking the colors and patterns of each species with artificial “flies” designed to entice hungry fish to strike.

Immature stoneflies are called naiads (you will hear some refer to them as nymphs) and live in well-oxygenated waters (streams and rivers and some lake shores) for one or more years depending on the species. This one was a large species, the exuviae being over an inch in length. Many of the larger species are carnivorous, preying on other macroinvertebrates living in the river. 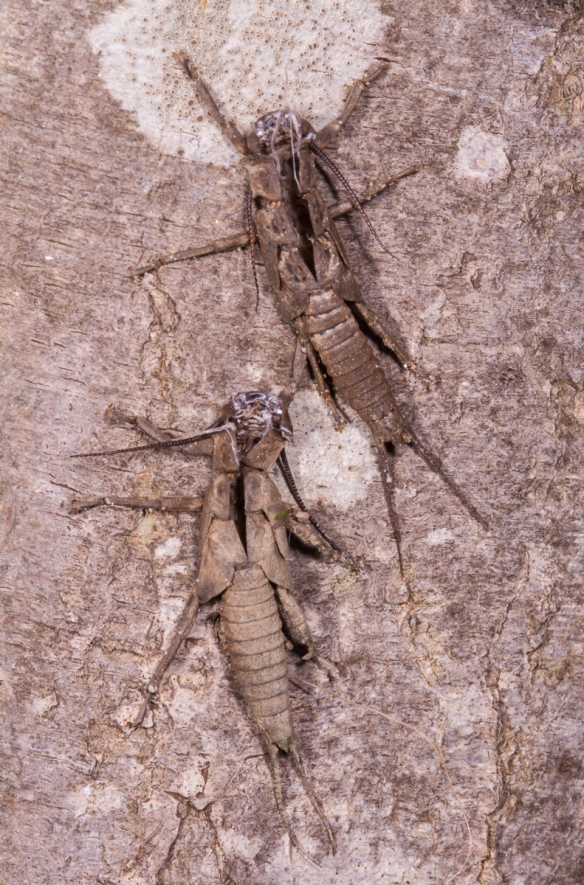 Like other arthropods, the naiads of stoneflies must periodically shed their exoskeleton so they can grow. This may happen from 12 to 24 times depending on the species. When the time is right, the last stage of the naiad crawls out of the water and clings firmly to a surface and begins its final transformation. A longitudinal slit forms along the top of the thorax and a winged adult crawls out, leaving the “skeleton” behind. Since I do not live near suitable habitat, I rarely see the short-lived adults, but have found many exuviae over the years as I walk along the edges of streams and rivers. 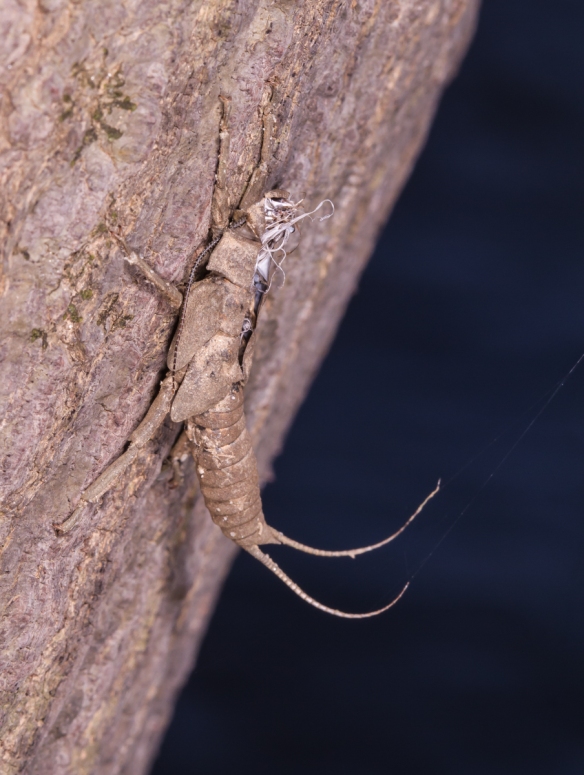 The sheds contain an amazing amount of detail such that I could probably identify the maker to species with the right field guide. Noticeably visible against the dry, gray skin are some white filaments near the head. These are the linings of the trachea, part of the respiratory system of the insect, which are also shed during each molt. Many species of our stoneflies emerge in late winter and early spring and the number and amazing detail of all the exuviae indicated that this had been a recent event. If only I could have witnessed it. But seeing the result is also amazing, as the evidence may only last a few days or weeks depending on the weather. And the abundance of exuviae is a good sign that this stretch of the Yadkin is in pretty good shape, as stoneflies are generally indicators of good water quality. Sadly, far too many of our waterways are being threatened by excess sediment, toxic pollutants, or other human-caused factors. All of us need to spend more time with our rivers, get to know them, and appreciate the life-giving qualities they possess. Perhaps then we will care enough to learn how we can better protect them. 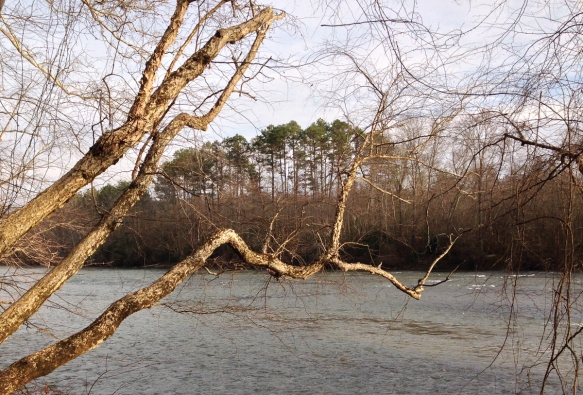