Badger hates society, and invitations, and dinner, and all that sort of thing.

~Kenneth Grahame, in Wind in the Willows

Badgers are a solitary lot, except during the mating season, or when females are raising their young. So, last year in Yellowstone, I was thrilled when I saw more badgers than I have ever seen in my 30+ years of visiting the park. Naturally, I expected to see quite a few this year with my group. But, I was surprised when Badgers were just not to be found. Given the earlier than usual time frame of this trip, I assumed that these members of the weasel family were simply not yet very active above ground. They are not true hibernators, but do become less active in cold weather.

After my group departed, I finally started seeing these busy carnivores as they shuffled across the sage flats and grasslands of the northern range doing what they do best – hunting for ground squirrels and other prey. 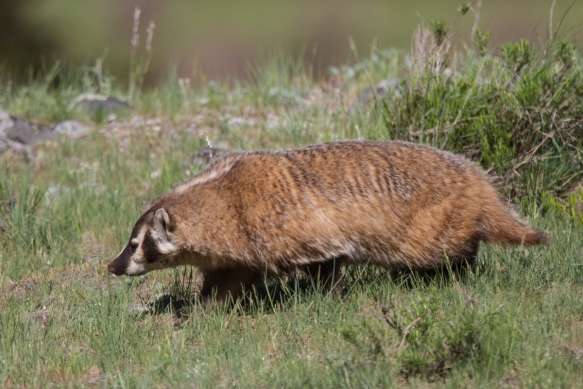 Badgers move in a purposeful manner

Every time I have seen Badgers out and about, they always seem to be moving at a hurried, focused pace, often nose to the ground, head swinging back and forth as they check the area for food. I imagine that these seemingly grumpy loners are muttering to themselves as they ramble, and every now and then exclaim, “SQUIRREL”, and make an abrupt turn, and start digging.

One morning I spotted a Badger scurrying alongside the road down by Slough Creek. It was a large one, perhaps a male, busily looking for a meal. Uinta Ground Squirrels were on alert, chipping alarms, and disappearing into their underground sanctuaries. But this predator is one that can quickly dig them out.

Badger at Slough Creek running with tail up

As it trotted along, this Badger did something I had never seen…it raised its tail when moving at a particularly brisk pace. I’m not sure if that is a sign of excitement when closing in on fresh ground squirrel scent, or just some Badger brake system in action if it gets going too fast on a downhill sprint. 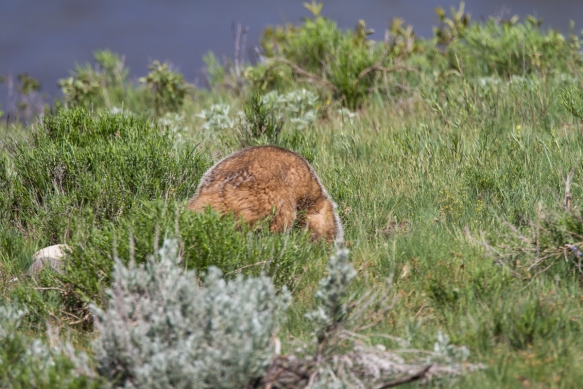 The Badger moved about a hundred yards while I watched. Mine was the second car on the scene, but soon there were a handful of big lenses following the Badger’s every move. It gave us a glance from time to time but seemed intent on its mission and eventually started digging in earnest in one spot. A Uinta Ground Squirrel soon erupted from the ground a couple of feet away and ran straight towards us before disappearing into another burrow over 100 feet from the busy Badger. But the Badger kept digging and the dirt was still flying. I decided a video clip was the best way to capture the energy of this earth moving machine.

Badgers often dig a new burrow (or more) each day, and it appeared that this one was doing just that. We watched it dig for about 10 minutes before it came out one last time, shook off, and retreated below ground, presumably for a siesta.

Badgers move a tremendous amount of earth in the course of a year. Their burrowing activities help aerate the soil, redistribute nutrients, and influence patterns of plant growth.

Estimates are that fewer than 10% of Badger-dug burrows are occupied by a Badger at any one time. There may be ten to twenty burrows per acre in good habitat.

The next day, I walked out and took a photo of the burrow entrance. Badger burrows typically have a sizable entrance hole and a large mound of dirt piled outside. These burrows may remain intact for several years after they are dug, providing shelter for many other creatures.

When I got home, I learned of an online Citizen Naturalist Project being conducted on American Badgers in Yellowstone’s northern range (Yellowstone Badger). The coordinators are hoping to gather information and photographs from park visitors that will help answer some basic questions about Badger distribution, density, and habits. The distinctive facial markings may allow for identification of individuals. It is hoped this information will contribute some basic knowledge about an important, but little studied, member of the park’s diverse mammal fauna.