The name “raccoon” is drawn from the Algonquian term “arakun” and roughly translates to “he who scratches with his hands”.

~Samuel I. Zevelof, in Raccoons: A Natural History

Between the Bobcat and the Black Bear cubs the other day, I had another interesting wildlife encounter. Most of the dusty miles of gravel roads at Alligator River National Wildlife Refuge are accompanied on at least one side, by many miles of canals. These dark waterways are home to a diversity of wildlife including substantial populations of aquatic turtles (mainly Yellow-bellied Sliders and Painted Turtles). Driving along on a sunny day reveals many turtles basking on the canal banks or lined up on any partially submerged log. Last Monday, there were plenty of turtles basking, plus two crossing the road, and one was even laying eggs in a shallow nest in the gravel road. I thought that was a poor choice for a nest location, but, shortly thereafter, I saw that choosing a good nest site is probably not easy in this predator-rich environment. 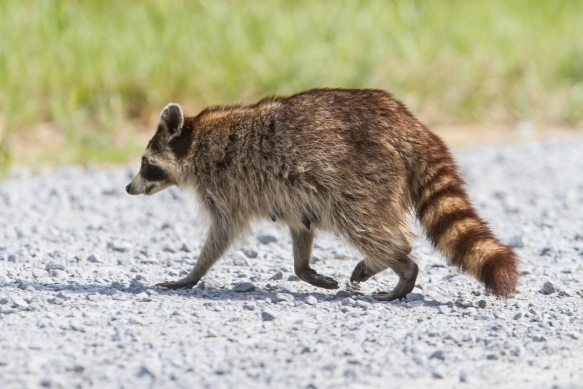 Driving around a curve, I spotted a female Raccoon scurrying across the road. She ended up in a grassy area near the junction of two roads and their neighboring canals. I quickly pulled over, expecting her to just disappear into the brush, but she had other things on her mind. 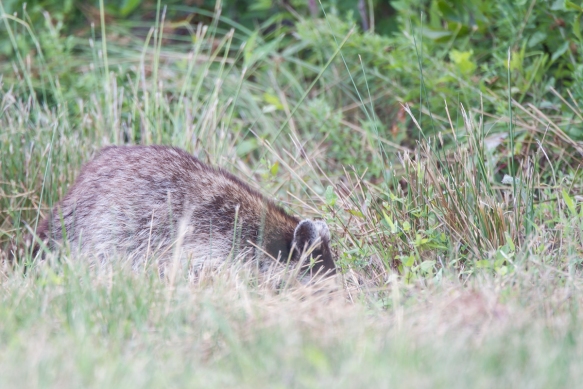 She moved quickly along the back edge of the opening, swinging her head and sniffing, pausing every now and then when she smelled something interesting. 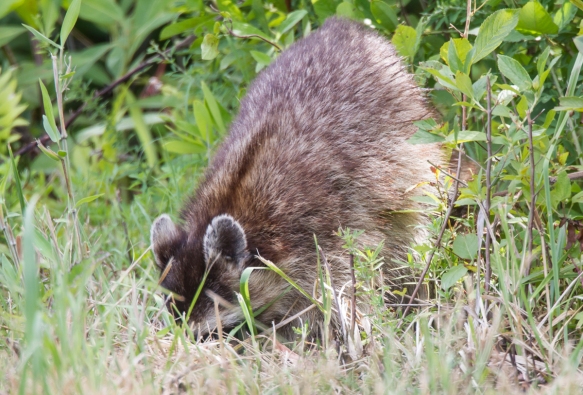 Suddenly, she stopped, spun around a couple of times with her nose to the ground, and began digging with those incredibly dexterous front paws. If you have ever seen their distinctive tracks in the mud, you know their front paws resemble tiny human hands, without an opposable thumb. One reference stated that the front paws contain four times the touch receptors as there are in their hind feet. Plus, a Raccoon’s brain supposedly has a major portion of the cerebral cortex devoted to these paws and the sense of touch. 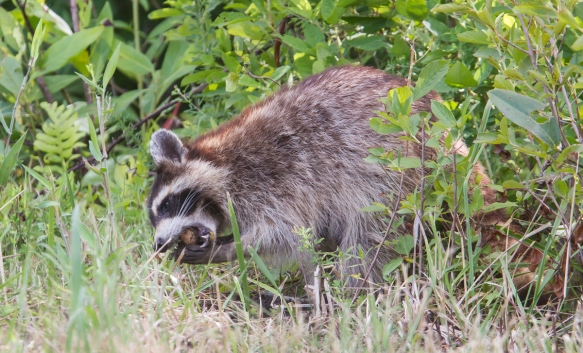 Raccoon removing something from the hole she has just dug

After digging for about a minute, she hunched over a bit more and then gingerly lifted something out of the hole – an egg, a turtle egg. She held it between her paws, not grabbing it with the “fingers” as I expected, but holding it cupped in her paws like we would hold a tennis ball if our fingers were taped together. She gently roiled it into her mouth and began to chew. 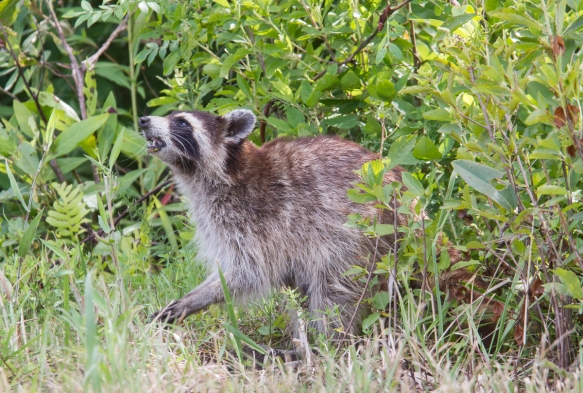 As she chewed, she lifted her head, and it looked as if she was moving the egg around inside her mouth to get the contents out, perhaps without swallowing the egg shell (which, in a turtle, is somewhat leathery instead of brittle like a bird egg). This routine was followed for each egg dug out of the hole. 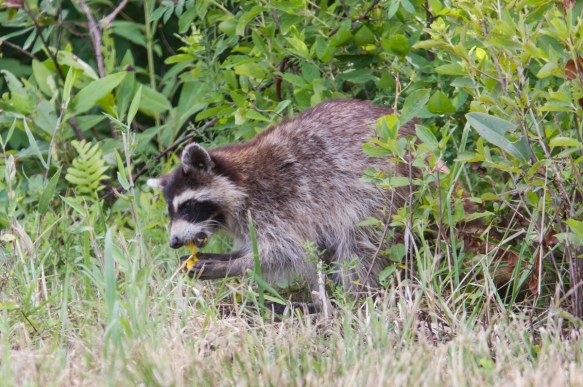 Holding an egg to get the last drop of goodness out

She manipulated each egg for 15 to 30 seconds, then her head would drop back down,  and she would pick up another egg and move it to her mouth. Her head was always low when she first got the egg, and then she would always raise it as she extracted the yolk. 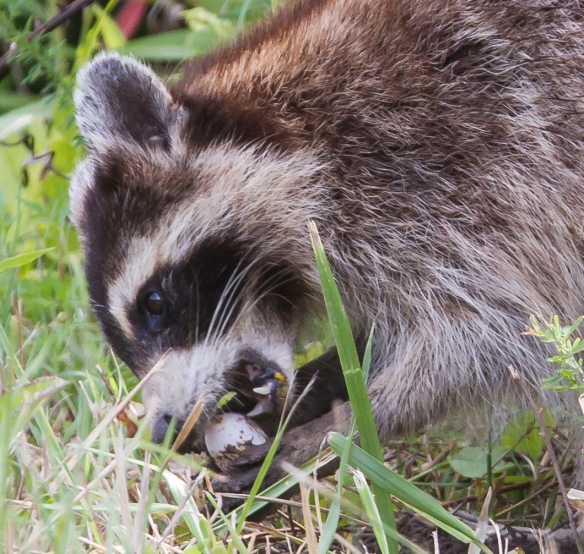 Raccoon pulling out the last egg from the turtle nest

She finally ate the last egg, looked over at me, and started walking back across the road. It was as if she knew she might get a meal in that spot and had made a quick run to the store to pick up a few things and was now heading home. And I’m betting she has had success in that location the past. Favorable turtle nesting sites are hard to come by in a swamp, which is what most of the land is around that road juncture. This wide grassy patch has probably served as a turtle nesting area for years, and the local Raccoon population has learned to periodically check it for the possibility of an egg breakfast. 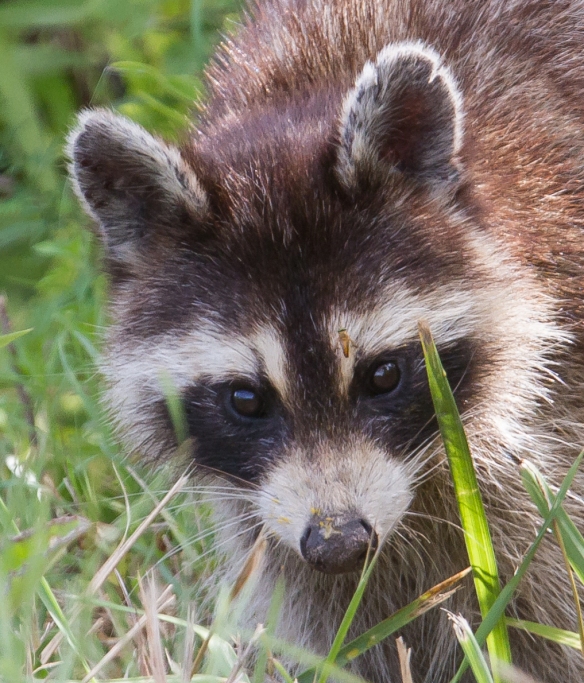 The Raccoon was not the only one getting a meal

When I later looked at the image of her after she ate the last egg, I saw that she was not the only one getting a meal at that moment. In fact, in almost every image I took that day, I could see one or more biting flies somewhere in the image. She has one above her left eye in the photo above. And a close look at one of the earlier photos will show a tick in her left ear. Everything needs to eat I suppose. 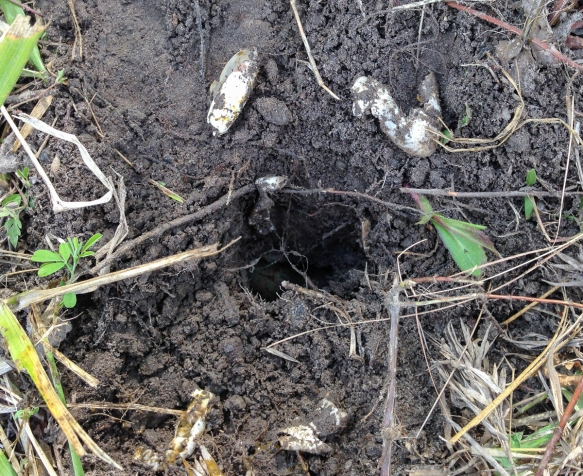 After she departed, I walked over to inspect the nest. I have seen this crime scene many times after the fact, but this was the first time I have witnessed the egg thief in action. There were 8 egg shells scattered about the hole. Sliders may lay two or three clutches per year of up to 15 or more eggs, so there are plenty of chances for a little one to at least hatch, although there are still a lot of predators to get past before becoming a fairly well-protected adult turtle in one of these canals. Meanwhile, that female Raccoon is probably returning to a tree to gather her family of babies after a good breakfast. As always, I am thankful to have been there to witness part of the cycle.