You can look out your window and wonder at the wholeness of nature.

It happened again. This moth-watching can be habit forming. While doing dishes the other night I noticed a couple of moths outside on the window screen above the sink. One was instantly recognizable, and a personal favorite. The other was something I have always really wanted to see, but never had, until that night. So I grabbed the camera and hurried outside. 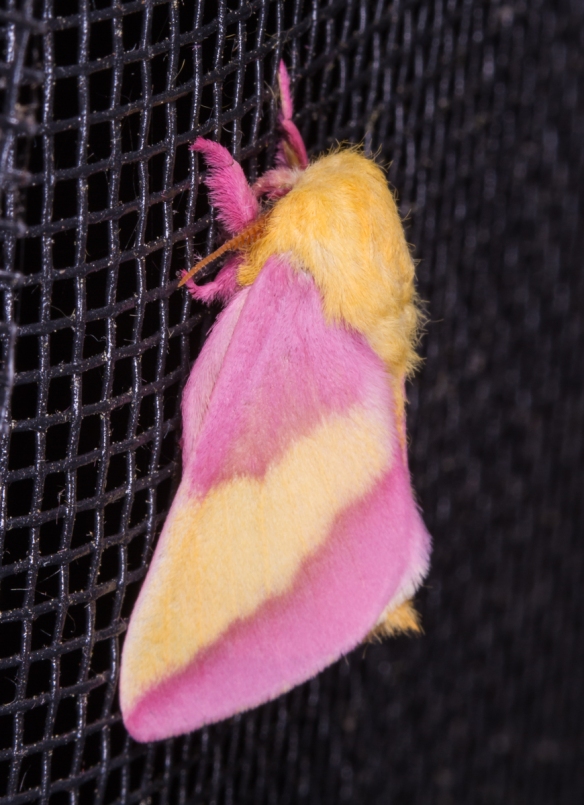 The first, a Rosy Maple Moth (Dryocampa rubicunda) is a beautiful and common moth in North Carolina. It may be second only to a Luna Moth in terms of the favorable responses it garners from folks encountering them for the first time.

They are one of the smaller members of the Silk Moth group, family Saturniidae. But they make up for their smallish size (wing span of up to 2 inches) with their brilliant pink and yellow coloration. 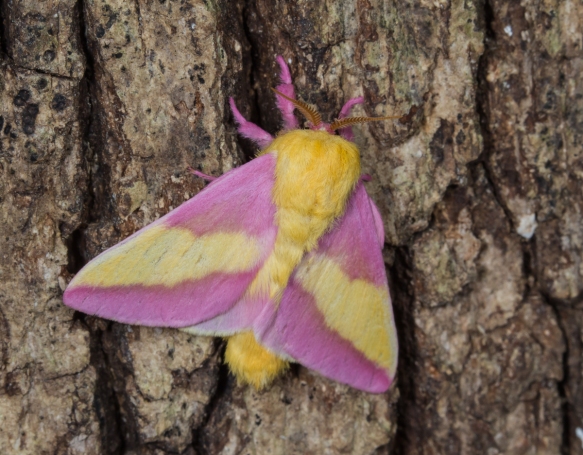 The caterpillars, known as Green-striped Mapleworms, feed in groups initially, and then separate and feed alone in their later instars. They feed on a variety of hardwood trees including maples and oaks. The adult moths do not feed (typical for this family), so they live only a couple of weeks.

The other moth was smaller, but equally beautiful. It is one I had seen in the guide books, but never in person. It is also strikingly colored with an unusual apple green thorax and wing patches.

I had a difficult time, at first, distinguishing between two closely related species, but I have settled on this one being a Smaller Parasa Moth, Parasa chloris. It is distinguished from its similar-looking relative, the Stinging Rose Caterpillar Moth, Parasa indetermina, by its less rounded wings and a broader band of brown on the trailing edge.

Turns out the caterpillar of this tiny moth is one of the so-called stinging caterpillars. It has urticating spines that contain a toxin and can irritate human skin if they come in contact with you.

I have seen the close cousin of this species, the Stinging Rose Caterpillar, and it is one of the strangest and most beautiful caterpillars I have found. But now I really want to find the larva of the Smaller Parasa, because it is really an odd-looking critter…check out these images of the Smaller Parasa Moth caterpillar from the North American Photographers Group web site. Apparently, the larva everts its stinging tufts of spines when disturbed. 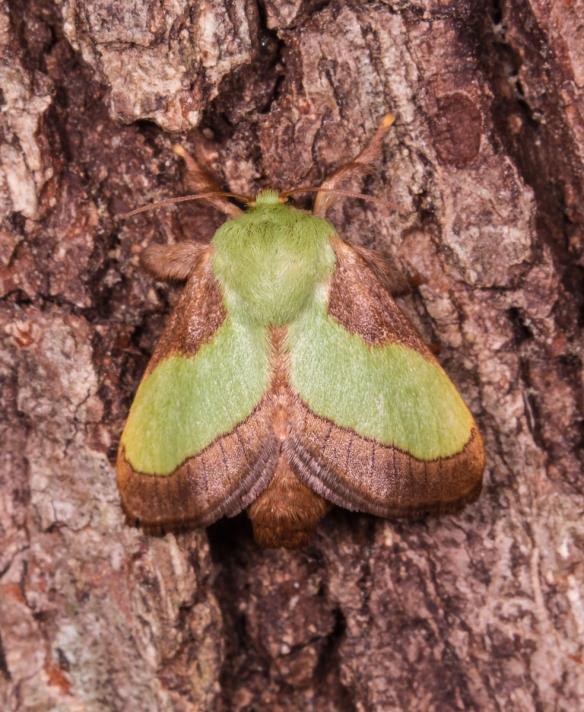 After several minutes of admiring this green jewel, the moth fluttered away to a tree trunk, and finally flew off into the treetops. Such simple beauties at my windowsill…certainly a great way to enjoy nature here in the woods.

3 thoughts on “Moths at My Window”