Salmon abound in great quantities at certain seasons of the year, when the water in every direction seems to be filled with them…

After camping and hiking in Olympic National Park, the next leg of the journey was by ferry, to San Juan Island. Quite a contrast, in terms of the number of people and the general feel of the place – less wild at first, but still beautiful.

There are islands, large and small, everywhere in this part of Washington. I wanted to go to San Juan Island for one thing – to see Killer Whales, now commonly referred to as Orcas, from their scientific name, Orcinus orca.  After riding a couple of ferries to reach the island, the drive to the lodging was quite a contrast to the busy, tourist-oriented town of Friday Harbor. The marina crammed with huge sailboats and yachts gave way to rolling farmland and patches of forest.

The goal the next morning was a 5-hour sea kayak trip from Roche Harbor to hopefully see some wildlife. I knew it was a long shot, but seeing these graceful marine mammals from a kayak would be magical. Unfortunately, the weather did not cooperate. It was pleasant paddling out of the harbor and through the channel, surrounded by unbelievable homes along the shore, but when our group headed out and around the island where the whales would most likely be, the wind was ferocious and the waves made us all struggle in our tandem kayaks. I was impressed by how much wave action these kayaks could handle, but the guide wisely decided to turn back rather than expose everyone to a long paddle across such choppy conditions.

Enormous piles of driftwood line the cove at South Beach

The proprietor of the lodging had recommended a sunset trip to South Beach and it turned out to be a good recommendation. South Beach is well known for the large piles of driftwood washed in from the sea, and grasslands stretching down the the rocky headlands. A beautiful scene surprisingly shared with only a few people that evening.

The next morning, the last in this part of the state before heading home, was spent on a whale watch boat. The boats have a higher probability of seeing whales than the kayak tours because they can obviously travel greater distances in search of these highly mobile marine mammals. An added bonus was having a pair of naturalists on board to answer any questions and give background on the whales we saw (if any). At check-in, they said there had been whales sighted earlier that morning so things looked promising. I finally had my 300mm telephoto along (for the first time on the trip) so I was anxious to head out.

We soon could see a gathering of a few other boats and the captain announced there was a pod of Orcas up ahead. Then we saw the tell-tale large dorsal fins slicing through the water. Killer Whales are impressive animals, boldly patterned in black and white, and reaching lengths up to 30 feet and weights of 6 tons. They are the most cosmopolitan group of marine mammals, being found in all the worlds oceans.

One of the on-board naturalists explained that these were a group of transient Orcas. In the 1970’s, a whale scientist named Michael Bigg, was the first to document that there was more than one population of Orcas in the area, and that the different populations did not behave the same, or interact with each other. He used the terms resident and transient to describe the different groups in the Pacific Northwest (they now also recognize a third group called offshores). A major distinguishing factor between these two types is their diet. Residents are fish-eaters, and not just any fish, but salmon, and not just any salmon, but primarily Chinook Salmon. The two groups of resident Killer Whales are in near-shore waters from spring until fall. Their whereabouts in winter are still being uncovered using satellite tags. Transients tend to travel in smaller pods and are warm-blooded meat-eaters, primarily hunting seals, porpoises, and whales. The different populations of Killer Whales speak different languages, do not generally interact, and are not known to interbreed.

Members of a transient Orca pod swim near our boat

We eased into position as the whales swam amongst the viewers. They seemed to be just cruising along, not hunting, even though this channel is known as one of the prime feeding areas for the transient groups due to the abundance of seals and porpoises. Killer Whales can remain submerged for several minutes, so once they dove, it was always amazing to see where they would surface.

The action was quick and happening all around the boat, so it was tough getting good photos. While watching one small group, one of the whales suddenly came straight up out of the water in a behavior known as spyhopping. Observers say that Orcas often spyhop when near boats and it is believed to simply be a way for them to look around. Whatever the reason, it is a dramatic behavior and brought a chorus of oohs and aahs from our boat. 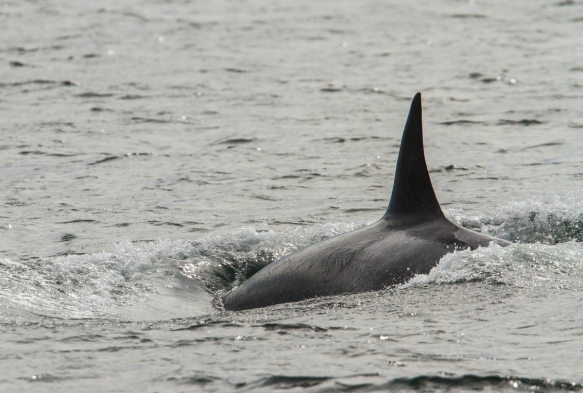 An Orca approaches our boat

The next few minutes brought another chorus of exclamations as a group of three Orcas turned and swam directly at our boat. Rules state that whale watching boats must stay 200 yards away from Killer Whales but you can’t always regulate what the whales do. This group seemed curious and passed right by the boat. I just looked as they passed by the bow, as the telephoto was too much lens, but what an experience for all on board.

The captain finally gave us a five minute warning and we watched the whales swim near some other boats before we turned toward home. Along the way, we stopped to see some other wildlife, including a Bald Eagle, and a bonus sighting of a Mink running along the shoreline. 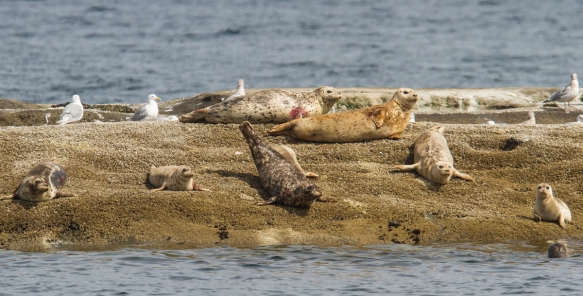 Harbor Seals hauled out on rocks at low tide

We also stopped at a rock island with a large number of Harbor Seals, one of the primary food items of the Orcas we had just observed. Harbor Seals haul out on rocks at low tide to thermoregulate and rest. They vary in color from gray to brown and are distinguished by their splotchy color pattern. 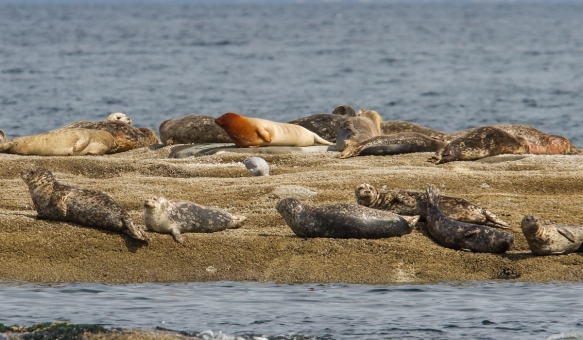 One seal had unusual coloration

But one of the seals stood out, as it had a very rust-colored head and light body color. References state that this color is probably due to iron oxidation of sediments these individuals accumulate on their fur.

Sharing the rock, and dwarfing the seals, were a group of Stellar Sea Lions. Harbor Seals weigh in at 200-300 pounds, whereas the Stellar Sea Lions attain weights of up to a ton or more for large males. Seeing them lounging on the rocks made it even more surprising that they were food for the whales. I didn’t notice until looking at the images, but if you look closely at some of the seals you can see small wounds surrounded by patches of blood. I don’t know what caused these, but it could be something as simple as scrapes from hauling out on barnacle-encrusted rocks, or it could be near misses in encounters with Orcas or other predators. Either way, I think I might find anther place to swim if I was them, given what we had just seen.