This weekend, while I was picking beans in the garden, I felt I was being watched. I looked around, and, sure enough, had a visitor.

It was a beautiful Eastern Box Turtle, Terrapene carolina. This one was particularly striking, with a bright, bold pattern on both its shell and head.

Close up of the head of male Eastern Box Turtle

I suspected it was a male just from the bright colors (they often are brighter), and as I got a closer look, I saw another indicator of maleness in Eastern Box Turtles, red eyes. Males usually have red irises, females have yellow or brown irises. Of course, the best indicator is a concave area on the underside of its shell (plastron) if its a male; females are flatter. 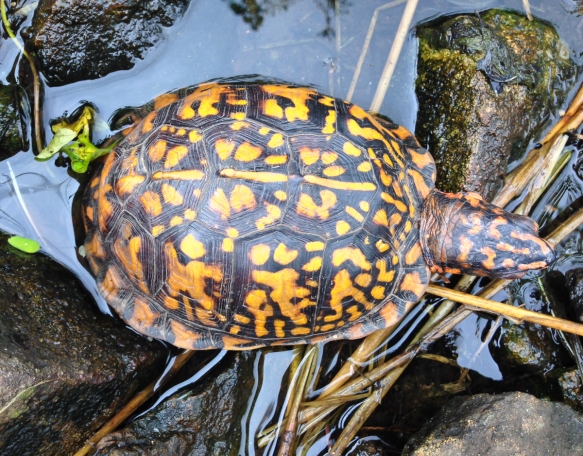 Intricate patterns of an Eastern Box Turtle from above

Archie Carr, the famous Florida naturalist, once wrote, “Everyone likes box turtles”. I think he is right. Everyone I know pauses when they see one and many will stop a car and rush to help one across a road (cars are one of the primary causes of death in box turtles). Perhaps because of their endearing qualities, they were named the state reptile of North Carolina in March of 1979. I was looking for a quote about box turtles when I came across a newspaper article published the day after the NC Senate approved the bill making that designation official. Some members of the House had spoken in favor of box turtles while a few of the representatives from the mountains questioned an eastern turtle’s ability to represent our state’s western region (I guess the name Eastern Box Turtle overshadowed the fact that the turtles are found throughout the state). The bill’s sponsor, Rep. Chris Barker, wore a turtle embroidered vest, had a small child bring in two turtles in a box, and spoke highly of the turtle’s qualities that would make it a good representative of our state. “In order for a turtle to make progress, he must stick his neck out. I think state officials and the General Assembly should emulate this”. Of course, it should come as no surprise that there were some dissenting opinions, although it was only one no vote in the Senate. That Senator explained it this way – “I don’t feel we should be represented by something that sticks its head in a shell and forgets what’s going on”. Hmmm, guess it always depends on how you look at something. At least most people like the turtle…