In summer the empire of insects spreads.
~ Adam Zagajewski

In honor of BugFest happening today, I thought I would post another unusual caterpillar portrait – the Spiny Oak-Slug, Euclea delphinii.

As a member of the slug caterpillar group, the Spiny Oak-Slug lacks the usual paired prolegs of most caterpillars and, instead, has medial sucker-like appendages on the first seven abdominal segments. This causes them to move in a gliding fashion, much like a slug, rather than the crawling motion of most caterpillars. 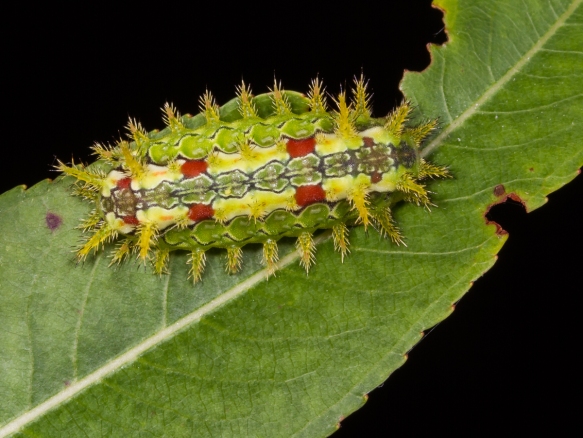 Both a beauty and a beast, the Spiny Oak-Slug is well armed with urticating spines

As you might suspect by its appearance, it is another of the stinging caterpillars, and can impart a painful stinging sensation to anyone that touches it. This species is highly variable in color, but all are well-armed with three pair of elongate spiny lobes on the front end and two pair on the rear. I have read that their sting is not quite as painful as some, but I think I’ll just take that as fact without any further testing. There are two generations per year in the south and the larvae feed on a variety of deciduous trees and shrubs (this one is on a species of willow). When you take a close look at this spiny mini-beast, you can’t help but admire the intricate detailing and patterns – such beauty in such an untouchable package.