If alarmed it squats for concealment…;the longitudinal stripes on its back and head so closely resemble prostrate stems of dead grass that the bird is difficult to distinguish.

People often react with a bit of disbelief when I mention seeking snipe. After all, many have heard of the proverbial prank called a snipe hunt, wherein an unsuspecting city slicker is told to go out into the woods at night holding a bag with which to capture snipe, and is left there all night by the local folks. So, when I try to find a snipe for people, they are often surprised that there really is such a bird. Ours is now called the Wilson’s Snipe, Gallinago delicata. This widespread shorebird has undergone some common name changes from Wilson’s Snipe to Common Snipe, and now back to Wilson’s. They are a common winter resident in much of the Coastal Plain (and portions of the rest of our state), but are often a difficult bird for the average birder to spot, due to their habitat and camouflaged feather pattern. 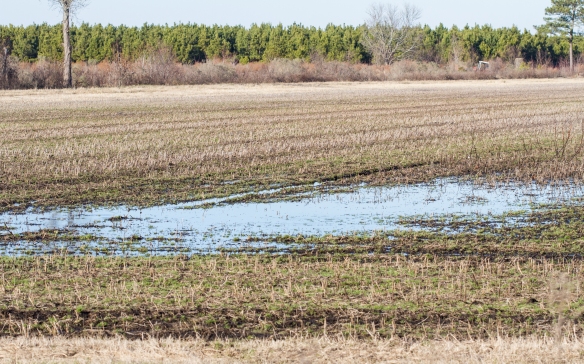 Snipe prefer wet areas like marsh edges, roadside ditches, and wet puddles in farm fields. When alarmed or sitting tight, they can be very difficult to spot. 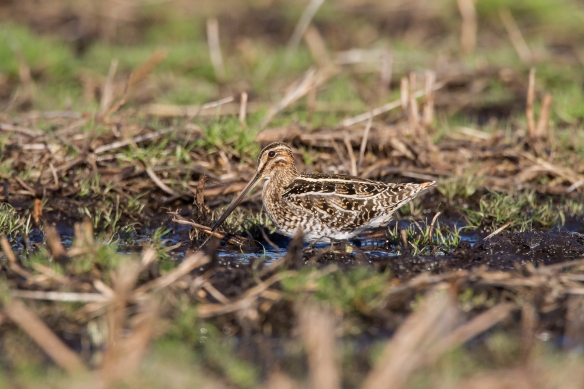 In fact, when I stop at a likely-looking spot and tell folks to look for snipe, I suggest they look for something that looks like a clump of grass stems with a long bill. 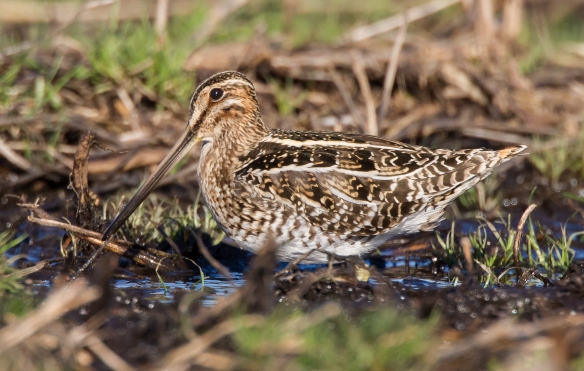 Snipe are well camouflaged and have an extraordinarily long bill

Indeed, a very long bill, measuring about one fourth the bird’s body length. They use this bill to probe for worms and other invertebrates in the soft ground and mud at wetland edges. Their feeding motion resembles that of a sewing machine in its rapid up and down movement, with their head often going into the water almost up to their eyes before pulling back up. They seem to feed for long periods of time without pulling their beak out of the substrate, leading some observers to wonder how they are swallowing their food. It appears that they move the prey up the backward-projecting serrations on the inside of the bill with their tongue and are thus able to swallow while the bill is still in the muck. 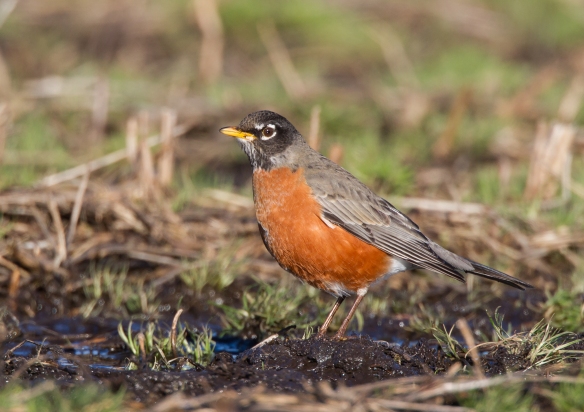 There were about six snipe feeding in this field puddle, along with a couple of Killdeer, and several American Robins.The low afternoon light enhanced the rust colors of the robins, making them, and the light-colored Killdeer, the most obvious birds in front of my camera when a car pulled up behind me. I can only imagine what the driver was thinking as he studied me taking pictures of such common species. I am also betting they may have totally missed my primary quarry, camouflaged amongst the soybean stubble. 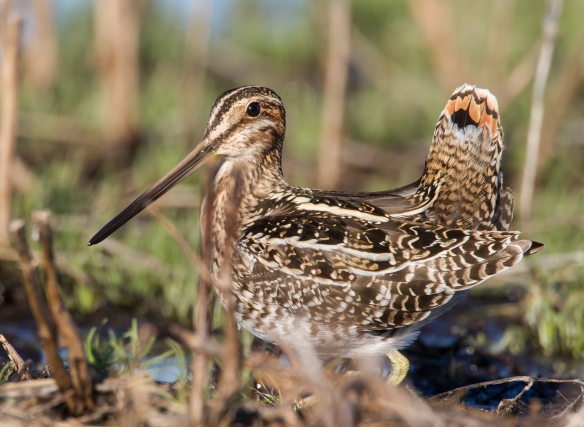 At one point, one of the snipe rushed another to perhaps move it form a prime feeding spot. The bird that was rushed, squatted, and erected its tail, displaying a prominent tail spot. This may be some sort of aggressive display, and it is the first time I have ever seen that distinctive feather spot.

Wilson’s Snipe and its reflection while feeding in shallow water

One reference stated that the Blackfoot Indians had a name for this bird which meant, shadow in the water, supposedly because snipe often stand in the water and admire their own reflection. Well, I know I admired it when they managed to get into the shallow puddles, but I think they were too busy probing the mud for worms. 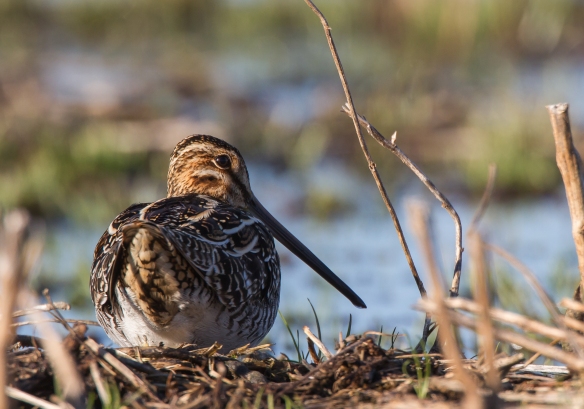 Wilson’s Snipe from behind, showing the long bill

As it turns out, people really do hunt snipe. The daily bag limit for Wilson’s Snipe in North Carolina this year is eight birds. The season runs until the end of February. This is a far cry from the days recorded by A.C. Bent. He reported on the exploits of one particularly notorious snipe hunter, a Mr. James Pringle. He supposedly set a one day record of 366 snipe in December of 1867. He is alleged to have shot 69,087 snipe in a twenty year period from 1867 to 1887. It is no wonder that their numbers decreased during that time. And Mr. Pringle was not a market hunter, but, instead gave the birds to friends. In the days of market hunting, the most skilled hunters would often bring many birds to market earning the name “sniper” as a badge of honor for the difficulty in shooting this elusive bird. The term has evolved to now mean a skilled shooter, but one with a very different target.