Ice is an interesting subject for contemplation.

Weather changes quickly this time of year. When venturing out, we need to be prepared. Imagine if you live out in it all winter. While snow is relatively rare in our eastern wildlife refuges, ice is common. A sudden drop in temperature on a still January night can lead to quick freezes in all the puddles, ditches and other waterways. 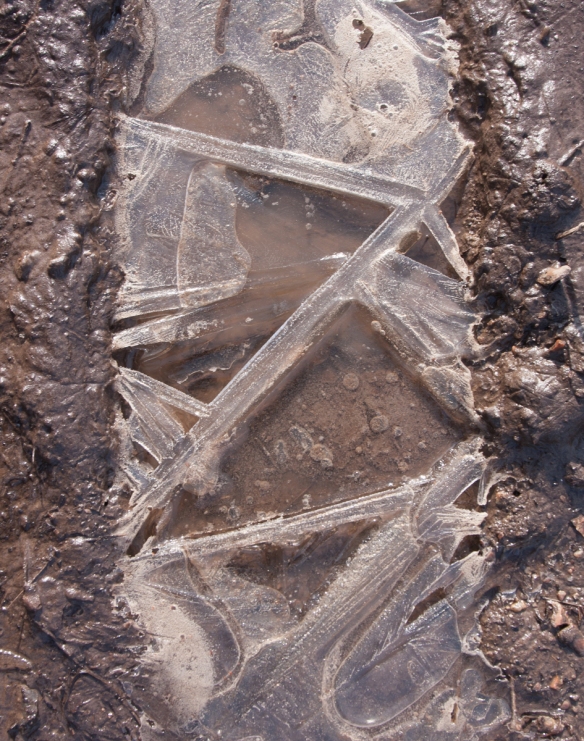 Such was the case last week at the Pungo Unit when an overnight cold snap turned what had been a wet field full of hungry Wilson’s Snipe and Killdeer the previous afternoon, into a skating rink the next morning.

Wilson’s Snipe are difficult to see in grassy areas

The day before I had counted 18 Wilson’s Snipe in this flooded portion of an old soybean field. The next morning, the pool was frozen and, at first, I didn’t see a singe bird. Then, as I opened the car door, a snipe stood up and ran. So, I got back in the car and waited.

Soon, I started seeing lots of lumps in the grass – snipe lumps. The key was to look for dark clumps of “grass” and then check them out with binoculars. Most turned out to be Wilson’s Snipe, apparently waiting for a little warmth before venturing out to feed.

A cautious Wilson’s Snipe ventures out onto the frozen puddle

I watched the first snipe approach the ice rink. It moved out across the frozen surface slowly, much more slowly than their usual walking pace.

The first few steps were almost graceful. But that quickly turned comical as almost every snipe that attempted to cross the ice found itself slip-sliding away. There was usually a quick wing assist to try to stay upright. A few even abandoned the attempt altogether and flew over the ice to the grassy area on the other side.

The snipe slip and squat pose

One bird did a butt flop on the ice with both legs shooting out in opposite directions.

When that bird finally made it across, it seemed to express the embarrassment for itself and the rest of its clan with a slight look of disgust, or maybe it was contemplating another use for that long bill besides just probing the mud for worms.

A Tundra Swan stands on the frozen edge of the impoundment

After several good laughs, I drove over to the impoundment that has been so productive this season for swan watching. Most of the water was open out in the middle of the impoundment, but I noticed some swans along the edge that seemed to be standing.

No problems walking on ice

I moved to an open spot with a good view and could see several Tundra Swans were gingerly walking on the skim of ice along the marsh edge. Their broad webbed feet have distinctive claws at the the tips of each toe. Perhaps this combination provides greater surface area contact with the slippery substrate and allows the seemingly always elegant Tundra Swan to walk gracefully atop the ice.

Check this out, Mr. Snipe

As if to reinforce their one-upmanship of the snipe in their ice skating abilities, one swan performed a regal wing flap at the conclusion of a short session of preening, leaving no doubt which species would receive the higher score in the marsh bird ice capades.

And, if there was any doubt of who is the most graceful and artistic of the birds of Pungo, a lone swan flew by the rising moon that afternoon, reminding me one more time of why these beautiful animals are my favorite bird of winter.