Live in the sunshine, swim in the sea, drink the wild air.

Due to a crazy schedule at home this month, my last refuge tour of this winter waterfowl season was the first weekend of February. I had a great group of three clients that all had experience with our national wildlife refuge system and were excited to spend a day at the Pungo Unit of Pocosin Lakes NWR. We had a fabulous day of woods walking, blue skies, birds, and bears (which was one thing these folks really wanted to see). As usual, when leading a trip, I don’t take many photos. But, since it had been such a great trip, I stayed an extra day for some Pungo Time for myself…and I am glad I did! I had an entire day, with surprisingly few other people around, to enjoy the sights and sounds of my favorite refuge. As I looked back on the images, the day seemed divided between observations of three components of this incredible wildlife habitat – the water, the forest, and the sky. So, I decided to present them to you in that order – first, the waters of Pungo… 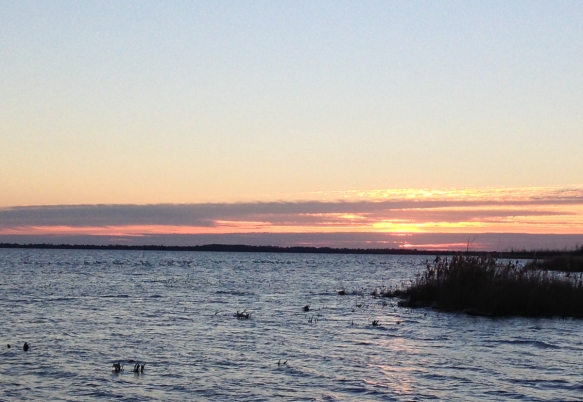 The centerpiece of this portion of Pocosin Lakes NWR is Pungo Lake.  it is approximately 2800 acres, making it much smaller than nearby Lake Phelps (~16,600 acres) and Lake Mattamuskeet (~40,000 acres). All are shallow with average depths of no more than 5 feet, but Pungo Lake is very different in one important aspect. Unlike the other two, which have sandy bottoms, Pungo Lake has a peat base. This makes these waters very dark due to both suspended particulate matter and the tannic acids associated with peat. Very little sunlight penetrates these waters which means little or no aquatic vegetation grows in the lake. This, coupled with the acidity of Pungo Lake, means that there are few fish to be found in its waters. All of this dictates that this lake is used primarily as a resting and roosting area by the winter waterfowl, whereas Lake Mattamuskeet and Lake Phelps are also used as feeding areas. This also explains why you rarely see diving ducks, like Canvasbacks or Bufleheads, or fish-eating species, like Common Loons, on Pungo Lake. 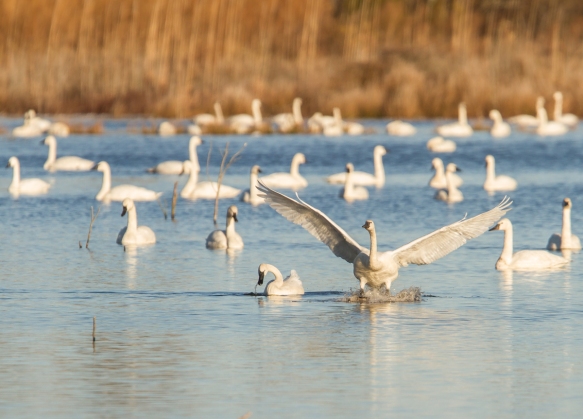 Swan splash down on one of the managed impoundments at Pungo

In addition to the open waters of the lake, there are over 400 acres of so-called Moist Soil Units (MSU’s) and over 500 acres of forested wetlands in the Pungo Unit. The MSU’s usually harbor thousands of waterfowl each winter as they provide an ideal combination of available food (in the form of aquatic vegetation, fish, and aquatic invertebrates) and shallow water. This winter, one of the MSU’s that is alongside a refuge road has been a great place for observing and photographing Tundra Swans. I have shared many photos from this particular spot in previous posts but was looking for something different. 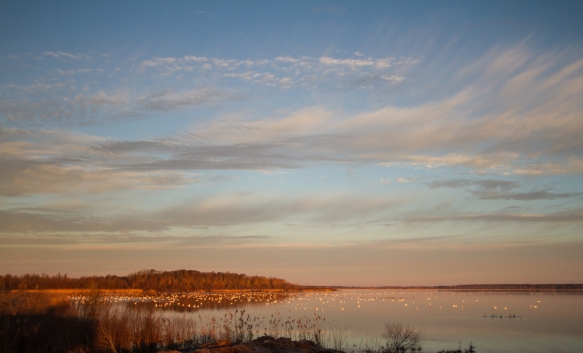 Sunrise from the observation platform on Pungo Lake

I usually start my days with clients at the observation platform on the south shore of the lake. It is a great place to watch the changing light and get some perspective of the lake and the surrounding landscape. As the sun starts to rise above the horizon there is often a parade of Red-winged Blackbirds flying out to the fields, along with the occasional Northern Harrier flying westward. This means I rarely see other areas of the refuge at that moment of the magic light of sunrise. But I started this day in a different spot, the impoundment known as Marsh A, a location I hoped would provide some striking silhouettes of Tundra Swans. 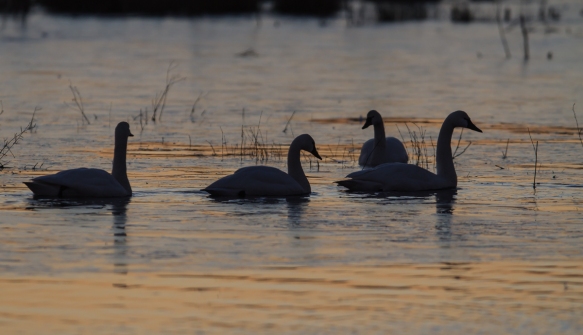 The key is to get to your site well before the sun comes up. So, I positioned my car where the sun would come up behind a large flock of swans on the impoundment. Some of the swans were slowly swimming about, perhaps claiming their favorite spots. The changes in light start out slowly at first with the scene initially dominated by a blue-gray palette having only a hint of gold. 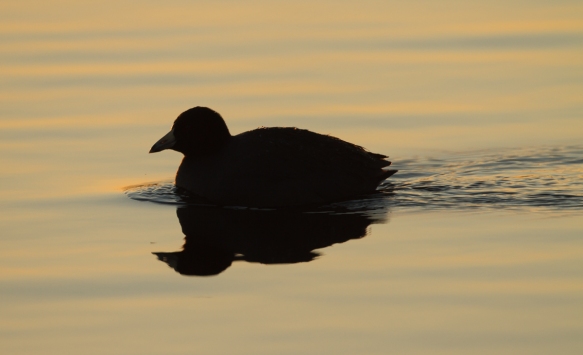 As an American Coot swims by in front of the swans, the golden hues start to cover more of the water surface. 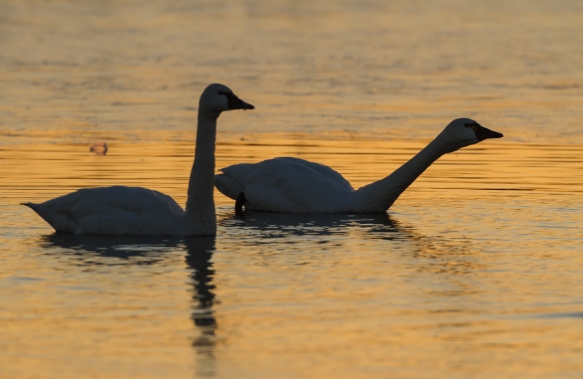 The glow soon begins to flood the sky and the water below, giving the swans a more perfect shadow of themselves. They seem to respond with an increase in activity and interaction.

As I scan the flock, a few are preening, readying their feathers for the start of a new day. 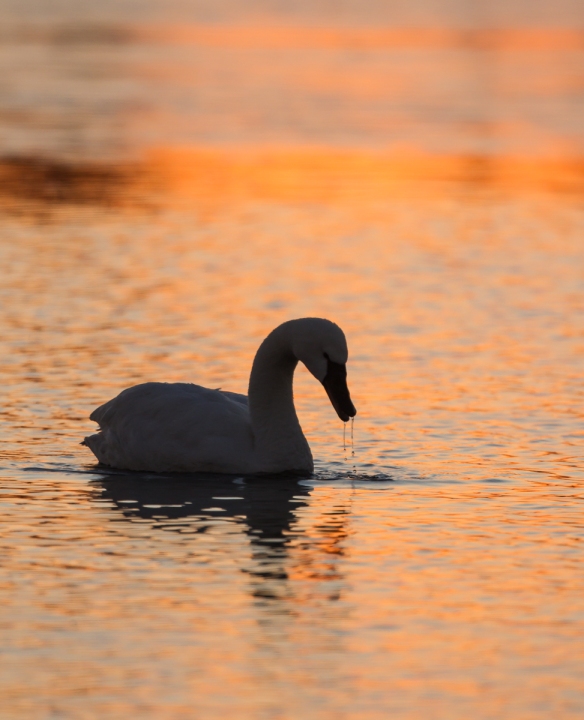 As increasing tones of orange signal the approach of the sun, I swing the camera back and forth looking for a subject before the bright beam of morning light breaks above the thin dark line of marsh bordering the far edge of the marsh. 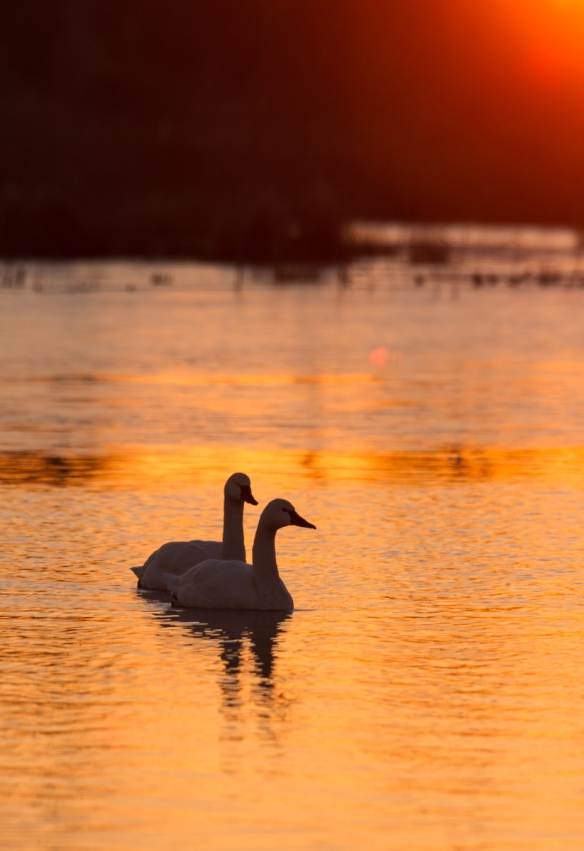 A pair of Tundra Swans swim together as the sun rises

Before I can fully capture the fleeting radiance of the rapidly adjusting scene, the first rays of sunlight pierce through the trees lining the edge of the lake. 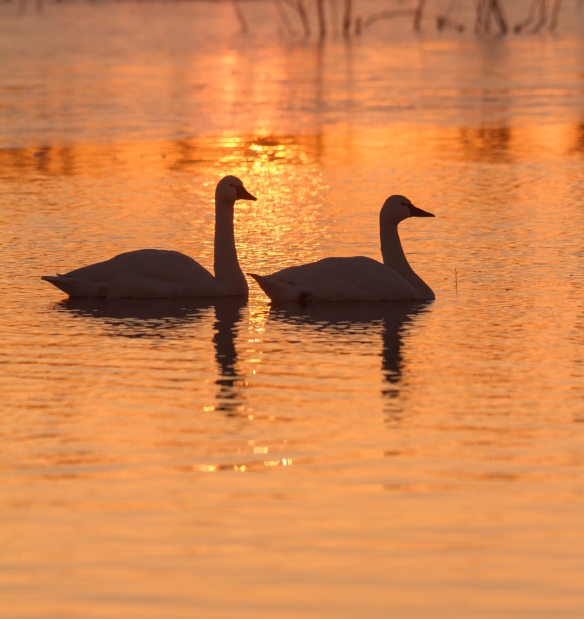 Swan silhouettes highlighted by the glow of the rising sun

Suddenly, there is a dazzling golden-orange stripe on the water. Swans swimming near the reflected beam now appear extra black. Their curved necks seem even more elegant in this light and their movements even more graceful. 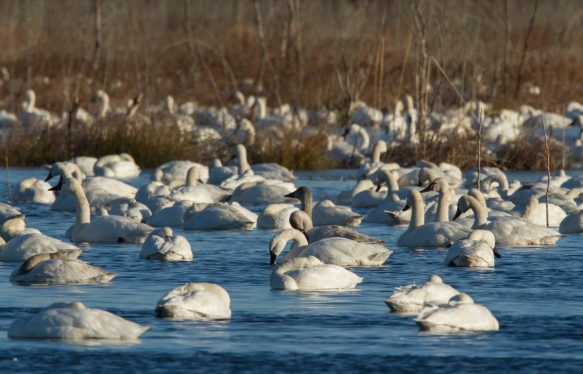 Tundra Swans at the same location about an hour after sunrise

In less than fifteen minutes after the first orange beams struck the surface, the golden glow of a spectacular sunrise had faded. I decided to move on, looking elsewhere for some of the many species that tend to move about at this time of day. When I drove back by the impoundment about an hour later, the swans had settled into their morning routine of napping, preening, and discussing their plans for the day. And now the light was totally different. 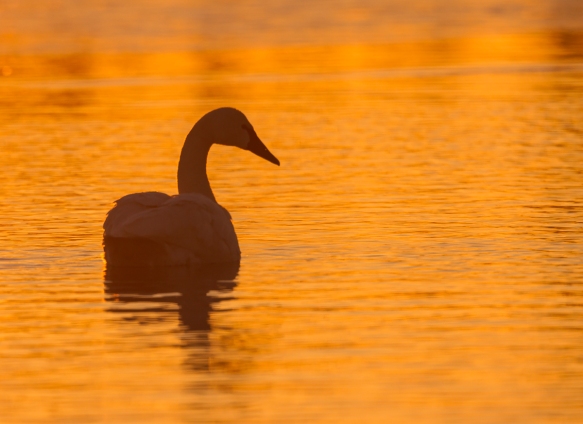 Their fleeting nature is one of the things that make sunrises so special. Each one different, each scene memorable, but brief. And on this morning, as is often the case, I had it to myself. While I love sharing these moments with others, there is also something special about being the lone witness to the start of another day in a wild place like Pungo.