They are a peculiarly honest and sociable little bird…they are considerable company for the wood chopper.

Of course, Thoreau was speaking of Black-capped Chickadees, found throughout much of the northern half of the United States and down into the Carolinas in the higher elevation mountains. This week I have been watching and trying to photograph the look-alike southeastern species, the Carolina Chickadee. I am working on a project trying to film the food items that some of our local bird species feed to their nestlings to show the importance of native plants as habitat for the food that birds need to catch to successfully raise their young. I was asked to start with Carolina Chickadees, probably due to their endearing nature and widespread distribution and association with human habitats. It is a bird that most people recognize and appreciate.

I have a couple of hollow log nest boxes in my yard and both were occupied by chickadees in April. I was excited as I knew this could provide some good natural-looking photo opportunities. But the birds fooled me.

My first week of filming was frustrating. The birds tolerated my presence, but they never paused at the nest entrance so I could tell what they were feeding their young. They just zipped into the nest cavity, delivered the miniscule morsel, and flew back out. So, I have many takes of the clip above. Not very useful, I thought. The young had just hatched so maybe the parents would slow down a bit when they started bringing larger food items. Nope, wrong again. After filming for several days over the nesting period, I gave up on my nest boxes, as the parent birds continued to just zip into the hole. 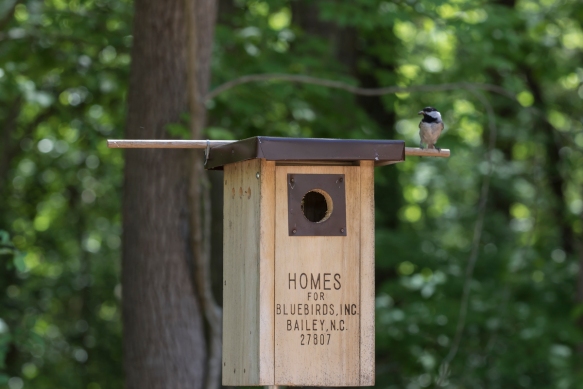 My neighbors’ nest box and perch (click photos to enlarge)

I had alerted neighbors to my project and a couple had offered their nest boxes as subjects, so I went to one that had a wooden dowel perch on top of the box. They had told me the birds would fly to the perch, sit a second or two, then go into the nest box. Success!

Again, the birds were incredibly cooperative. I had camouflage netting to cover me and the camera set up, but as I was setting everything up, an adult flew in, perched nicely, fed the young and left, all while I was standing there in the open. Over the next two days I spent about four hours gathering footage of the chickadee meals on wings program. The more I watched, the more amazed I was at the efficiency of these two parent birds. 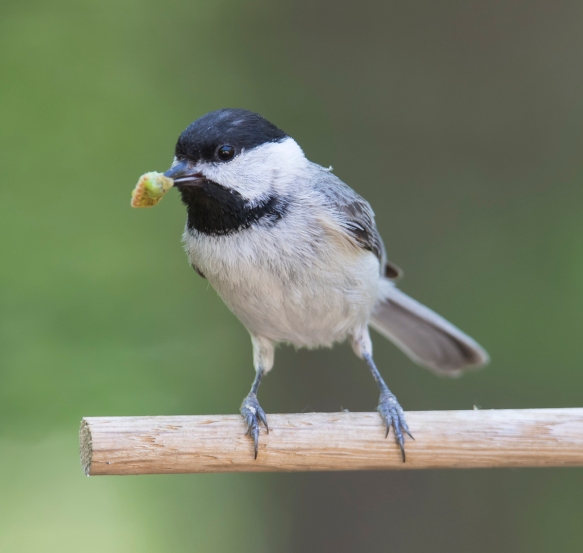 I decided to record their comings and goings for an hour to see how many trips they made and what they were feeding to their young. Here are the results for one hour of feeding time from 10:15 a.m. to 11:15 a.m. one day last week:

Spiders were the meal of choice for this pair of chickadees

The number of spiders was amazing. And, of the 14 spiders brought in, at least 10 seemed to be the same species!

The food of choice

The preferred food item looks like some sort of Sac Spider, a fairly common spider in vegetation in this part of the world.

Not another spider, Mom!

The chickadees in my yard fed their young until they fledged on day 17 after hatching. I did notice many small caterpillars and spiders being brought in. If you do some calculations, it becomes an amazing amount of food gathered…

If the pair in my neighbors yard captures spiders and caterpillars at the same rate for the entire 17 days the young may be in the nest, they will bring 2827 spiders and 1199 caterpillars to their hungry babies.

Even though these amounts are probably off due to the different sizes of food needed as the baby birds grow, impacts of weather on foraging success, and other variables, it still is an amazing number of food items gleaned from the adjacent forest and yard. That is the point of this project, showing the importance of planting native plants in your yard. Native plants harbor both greater numbers and diversity of invertebrates when compared to non-native species. And these invertebrates are critical food sources for young birds. I hope to film some other species as the nesting season progresses, so look for updates in future posts.

9 thoughts on “Meals on Wings”