~Encyclopedia of Life on one of the benefits of Gray Treefrogs

The rains over the weekend brought out an intense display of night sounds that could be heard through the closed windows and doors. Friends came over for dinner Saturday night and they were greeted by the forceful trills of numerous Cope’s Gray Treefrogs (Hyla chrysoscelis) calling from around the water garden out front. The call can be heard here.

After the guests departed, I went out to see if I could find one of the callers. They all fell quiet as the front door opened. But conditions were perfect – it had rained up until a few minutes before I went out, it was warm, and it was well after dark. These frogs typically are high in trees much of the year, but come down toward the ground when conditions are right for breeding. I quickly found one in a shrub next to the pool, vocal sac partially inflated, as if I had interrupted him mid-trill.

I did an admittedly poor imitation of a treefrog love song, but it was enough to fool the lusty amphibians into starting up their chorus again. I could see four calling males but only one was easy to approach for a photo. He had chosen a prime spot – a horizontal branch with fairly open surroundings, leaning out over the pool. Some researchers have indicated this type of calling perch is likely to lead to more successful matings. Females are attracted to the strength and duration of calls and will walk toward a male they find “attractive”.

The female apparently nudges the smaller male and he grasps her from behind in a pose known as amplexus. I found a pair in this gripping position on a log near the water. After an hour or two in amplexus, the pair will eventually make their way to water and lay a loose aggregation of ten to forty eggs, with the male fertilizing them externally. One female may eventually lay up to 2000 eggs per season. 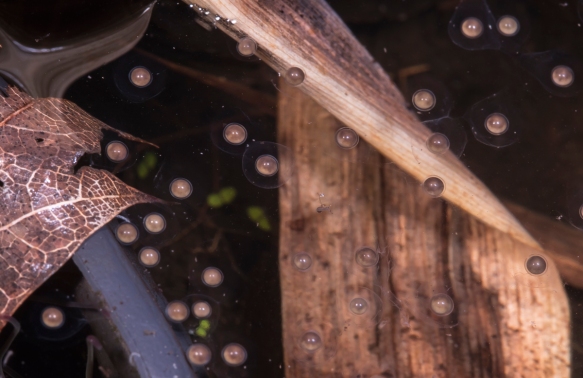 After all the calling and amplexus, eggs were laid sometime Saturday night or in the predawn hours of Sunday morning. At least some of the pairs had chosen the relative safety of some shallow water in a raised wooden barrel water garden near the main in-ground pool. The main pool is populated by a host of larger frogs {Bullfrogs, and Green Frogs} which can be potential predators, and so is a risky place to try to lay eggs from the adult treefrogs’ perspective. The above ground tub is much safer, but tends to dry out after a few days of no rain, so is more risky for the eggs and larvae. 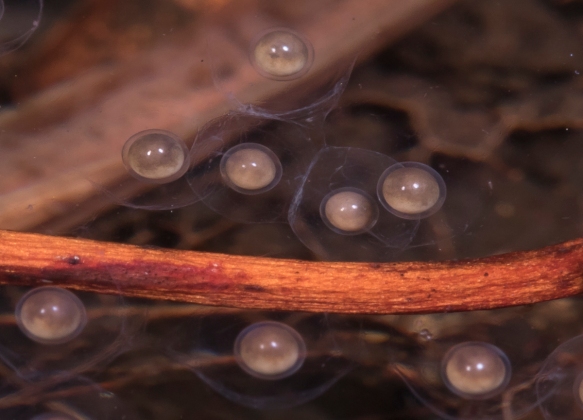 The eggs are loosely attached to vegetation in the water and blend in pretty well with the mud and vegetation. I checked on them each day and they finally hatched sometime between Monday afternoon and Tuesday afternoon, a little over three days after they were laid.

Larvae are initially yellowish-tan in color and about 1/4 inch in length, and don’t look much like a tadpole. But, over the next couple of weeks, they should change dramatically and acquire a distinctive color pattern that includes a high-arching red-tipped tail. Transformation to juvenile terrestrial frogs usually occurs in six to nine weeks. I’ll be watching…