Life is a beautiful magnificent thing, even to a jellyfish.

I try to swim every morning in the community pond where I live. The pond was created about 30 years ago when the area was developed. It is a great community resource, a beautiful setting, and a wonderful place to swim (mornings are almost always quiet). It is also a great habitat for all sorts of interesting wildlife…the usual herons, occasional ducks, dragonflies, muskrats, and aquatic turtles make the pond home, as well as a variety of fish, frogs, and aquatic invertebrates. But nothing prepared me for what I discovered one summer day several years ago – jellyfish!

I had heard of freshwater jellyfish in some parts of the world, but didn’t realize they live here as well. Some online searching came up with some good information and a Freshwater Jellyfish web site with a database of information on the distribution of this species, Craspedacusta sowerbii (also spelled sowerbyi). It turns out, this is not a true jellyfish like the ones we see in salt water, but is more closely related to hydra in the Class Hydrozoa. But, since they look and move like jellyfish, that is what they are commonly called.

The free-swimming phase (medusa) are about the size of a quarter. This stage (by far the most visible in the life cycle) apparently can be quite common some years and non-existent the next. I had not seen any all summer while swimming in the pond (I use swim goggles so can see well under water)…until this week. There are just a few, but, they are back! I went back out with a plastic bag and collected a few and put them in a small aquarium back home to photograph.

There is a stalked form, called a polyp, that is attached to underwater substrates such as logs and rocks. Under certain conditions, a medusa stage is formed that is free-swimming in the water column This usually happens in late summer after water temperatures warm. There are multiple life stages – egg; ciliated planulae (larvae); sessile polyps; frustule larvae that can move about and colonize new areas; and hydromedusae. References state that populations are frequently all male or all female, making sexual reproduction rare, but they can reproduce asexually in the polyp stage. 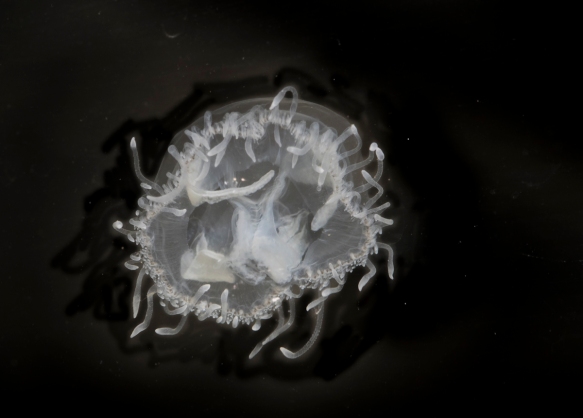 C. sowerbii is now widespread around the globe

This species has been described from 44 states and areas in Canada, as well as many other places around the world. You can click here to see the species’ recorded distribution in North Carolina. Scientists think it is originally from China and has been introduced globally via ornamental aquatic plants, stocked fish, and on the legs and feet of waterfowl and other aquatic birds.

C. sowerbii is a predator on tiny aquatic organisms such as daphnia and copepods. Like in marine jellyfish, prey is caught with their stinging tentacles. They wait for suitable prey to touch their tentacles as they drift through the water column. When small prey is encountered, nematocysts on the tentacle fire into the prey, paralyzing the animal, and the tentacle coils around the victim. The tentacles then bring it into the mouth. There is no evidence, however, that they are capable of penetrating human skin or causing any sort of stinging sensation. Having swam with large blooms of medusa in the past, I can say I have never experienced any discomfort from them, only fascination.

It is always exciting to see them, especially since it is an animal I didn’t know existed in North Carolina until a few years ago. I’ll leave you with a short video clip of one of these graceful tiny dancers as it pumps its way through the water. Beauty is, indeed, all around us, and free for all to enjoy.

By the way, the sound you hear in the video is the autofocus on my lens trying to keep up with the movement of the jellyfish.