In his plumes dwells the gold of the sun, in his voice its brightness and good cheer. We have not to seek him in the depths of the forest, the haunt of nearly all his congeners, he comes to us and makes his home near ours. 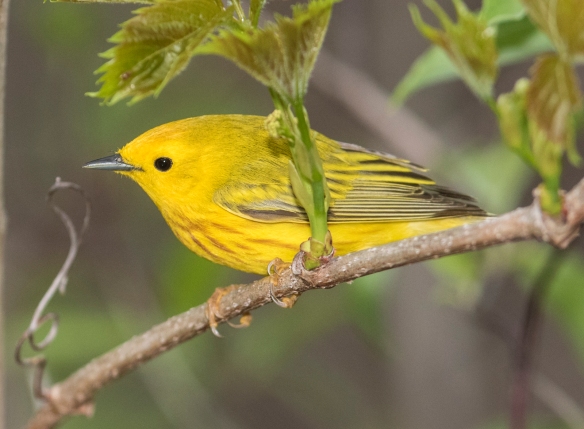 The most common warbler we encountered on our recent birding trip to Ohio was the yellow warbler, Setophaga petechia. These warblers are the most widely distributed members of their family and are bold in both color and behavior. Both sexes are bright yellow with males having rich rust-colored streaking on the breast, and often a hint of that color on their head. 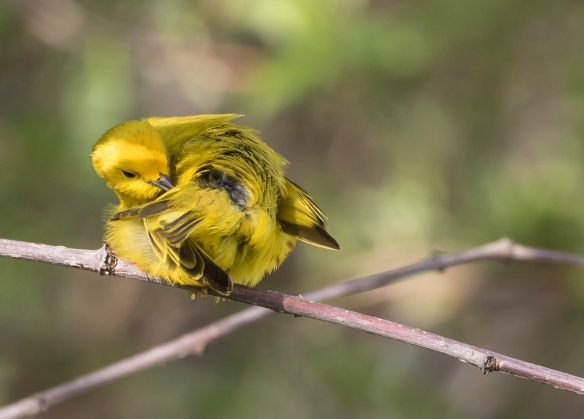 Yellow warbler preening as we sit nearby in our car

The look after a satisfying preen

On our first afternoon on the refuge, we saw these birds chasing each other, feeding, singing, and preening.  They often allowed a close approach, so we were able to get some nice photos within a short time. 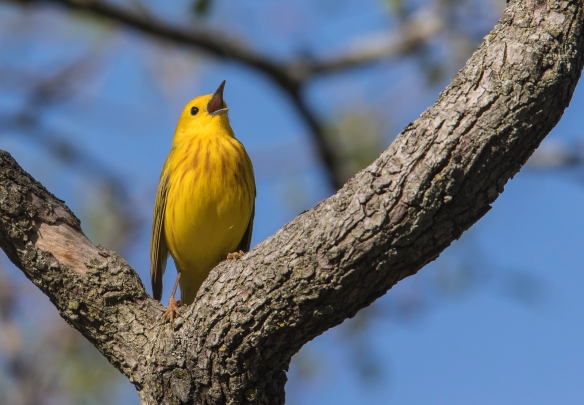 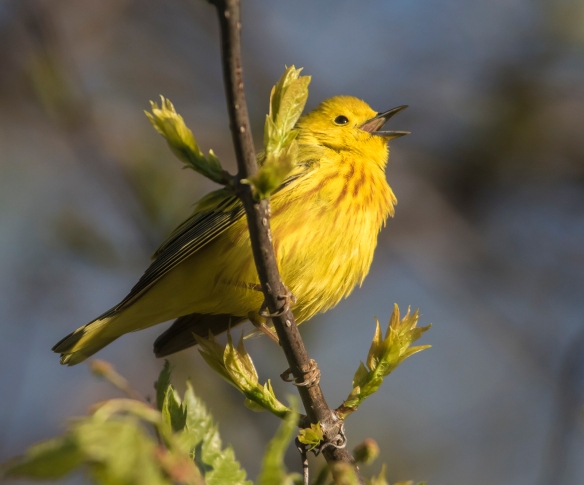 We heard singing males throughout the afternoon at Ottawa NWR and all day the next day at Magee Marsh. It was the start of their brief, but active, breeding season, and they were not wasting any time. The high-pitched song is a distinctive series of whistled notes ending in a rising slur. It is often described as sounding like sweet sweet sweet I’m so sweet. In keeping with the lack of shyness around humans, we often found males singing within a few feet of us.

On our last morning in Magee Marsh, we had a pair of yellow warblers flitting about right next to us. The male had just chased another male away, and was following the female, in between grabbing a small insect snack. The female then flew into a shrub a few feet away…

…and right into her nest! We maneuvered around on the boardwalk and found one tiny spot where we could get a clear view through the vegetation and see the nest. Yellow warblers make their nests in a vertical fork of a small tree or shrub, usually within ten feet of the ground. This particular one was about 5 feet from the edge of the boardwalk and at eye level. For the next few minutes, we watched as the female made trip after trip, bringing in material, and forming the nest to her exacting standards. 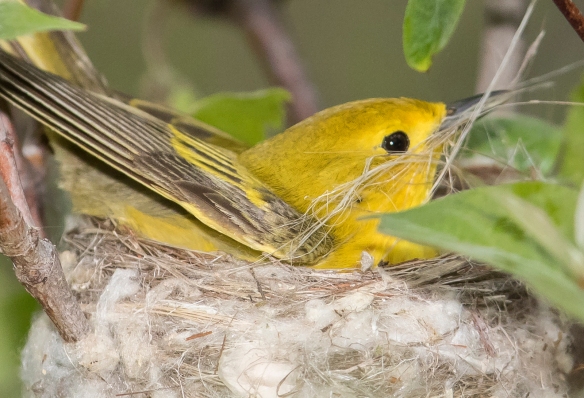 She brought in several plant fibers on multiple trips 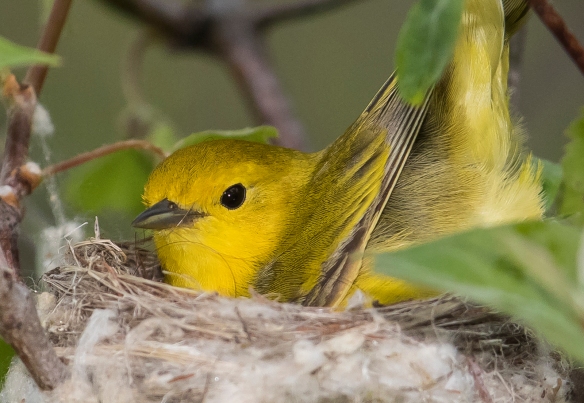 This time she brought a hair of some sort

Forming the nest by pressing her wings against the sides

Turning and pressing her body to help shape the nest

She periodically pressed deep into the nest, with only her bill and tail remaining visible

The nest starts as a cup of grasses and bark strips. Plant fibers, spider webs, and plant down adorn the outside. The nest is then lined with animal hair, plant fibers, and down. I’m not sure what the whitish material is on the outside of the nest, although there were cottonwood trees in the area which produce copious amounts of white fluff associated with their seeds. The nests of yellow warblers are often plagued by brown-headed cowbirds laying their eggs in them. If the foreign egg is detected, the yellow warbler often builds a new nest directly on top of the parasitized one, resulting in a nest that can have up to several layers.

The male takes a brief turn at forming the nest

The birds seemed totally uninterested in us, but we decided to move on after a few minutes of observation. It is always a treat to see a nest under construction, and we wished them well in their efforts. 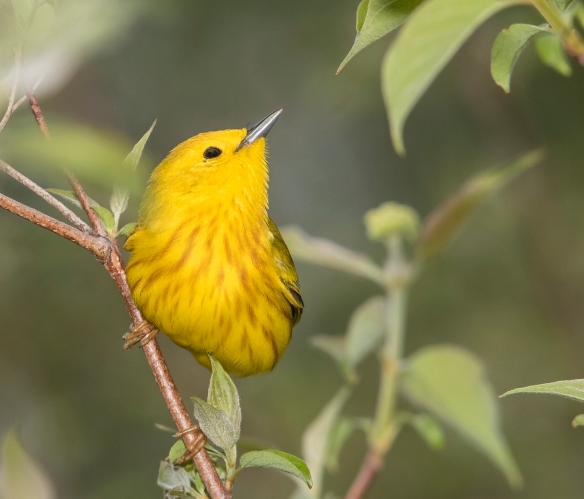 On a birding trip to our mountains this week, my ornithologist friend said that seeing yellow warblers always makes him happy. There is something about their trusting behavior and beautiful color that makes them special. The artist, Marci Moses, once said… Yellow is the perceived color of sunshine. It is associated with joy, happiness, intellect, and energy. Perhaps this brightly-colored warbler is on to something.