I guess there are some unicorns out there somewhere.

Indeed there are, and I have several in my back yard right now. In my last post, I mentioned I periodically check the leaves on a young wild cherry tree in the yard to see what might be using it for food or shelter. A few days ago, I discovered an early instar of a unicorn caterpillar, Schizura unicornis. They are named for the prominent horn-like protuberance on their first abdominal segment.

This is the first early instar of this species I have seen (I am guessing it may be a second instar – an instar is a development stage between molts).

When I looked at my image I saw what looked like tiny droplets of liquid on most of the small spines covering the caterpillar’s body. So, I did an online search and found some surprising results. Turns out this species has some interesting defenses that include the ability to spray an attacker with a chemical concoction made of formic acid, acetic acid and other compounds. Perhaps these droplets can also be secreted from the small projections on the larva’s body, although I can’t find any confirmation of that.

Another defense is their unusual shape and coloration. The wild cherry has a lot of dried leaf edges this time of year and the larvae tend to feed along the margins of these. They blend in remarkably well, even in their posture, as seen above.

A close look at a later stage of the larva shows how well their shape, and even the smallest details of the patterns and lines on their body, help them to resemble dried portions of a leaf. 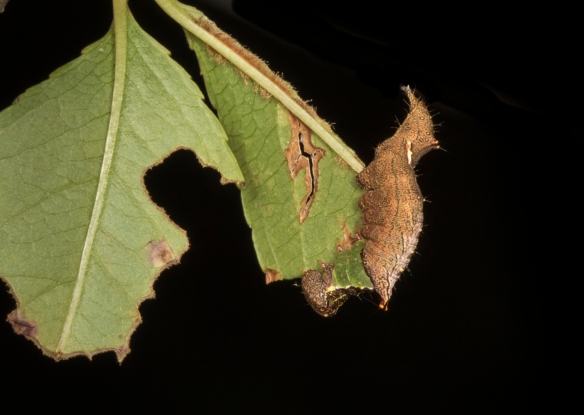 Early instar larvae have a white slash mark toward their rear

Most of the ones I found on this sapling are small, and are feeding on the undersides of the leaves, making it even more difficult to spot them (I turned them up for the photos). But, one caterpillar was a bit easier to see since it was sitting atop a white blob of silk.

Their defenses are not always fool-proof

The tuft of silk turned out to be a cluster of cocoons of a species of a parasitoid, some species of braconid wasp. Braconid wasps are minute parasites (most are about the size of a large gnat) that lay eggs in a variety of other insects. There are over 17,000 recognized species and they are considered important biological controls of many other insect groups, especially the larvae of flies, beetles, and moths and butterflies. Upon hatching, the wasp larvae feed on the host, consuming non-vital tissue so that the host continues to live. Then, one day, the larvae emerge and pupate, and the host eventually dies. 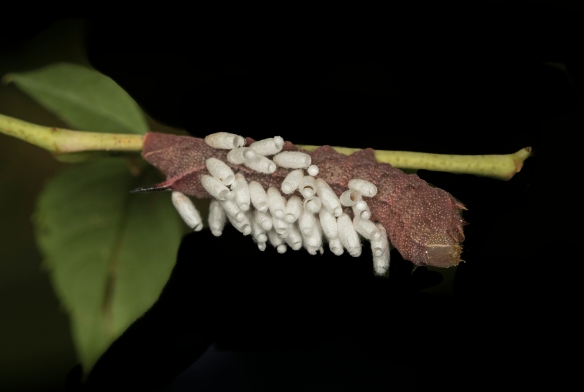 Hog sphinx larva with braconid wasp cocoons (ironically, I had just commented to someone that I usually find the green form of this caterpillar, and, this week, I discovered this brown one)

Many of us are familiar with the external cotton swab style cocoons found on many species of caterpillars (especially tobacco hornworms on your tomatoes). In the photo above, you can see the wasps have already emerged since the caps of the cocoons are open. But there is another group of braconids that have a different strategy.

They may even alter the behavior of the host caterpillar, creating a so-called zombie caterpillar (what’s with all the zombie things in my yard?). When the wasp larvae emerge, they form an array of cocoons that the caterpillar sits atop and guards (as best it can) until the wasps emerge.

The unicorn caterpillar and its parasitoid pillow

I normally don’t interfere much with nature but I decided to remove the wasp cocoons and the doomed caterpillar so I could see what, and how many, parasitoids emerged. I’ll try to get some photo of the tiny masterminds whenever they complete their life cycle. Here’s hoping the other 5 unicorn caterpillars I found on the wild cherry sapling have a better fate.

2 thoughts on “Unicorns Are Real”