There is more both of beauty and of raison d’etre in the works of nature- than in those of art.

The adaptations of insects in our yard are both beautiful and incredible. Here is a little more on some leaf edge caterpillars discovered the past few days…

One of the most exciting finds was a group of double-toothed prominent caterpillars (Nerice bidentata) on an elm sapling. These guys are amazing in that they have noticeable fleshy “teeth” on their dorsum that mimic the double serrated leaf edge of elm leaves, their host plant. 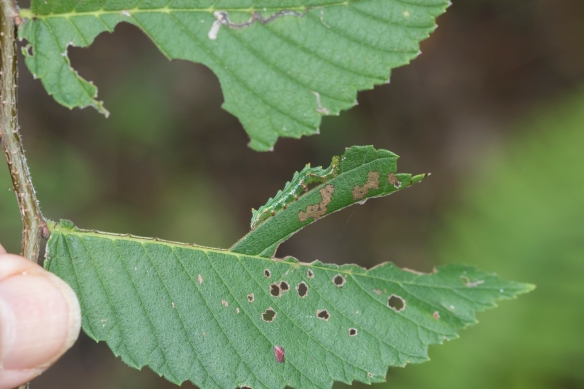 Several of them molted over the past few days and I noticed what seems like a slight change in behavior between the different sizes. The smaller larvae are somewhat darker in color and seem to feed along the leaf edges in a more exposed position.

Their color and pattern aids in the deception

The brown tips of the prolegs match brown spots along the mid-vein of the leaf. 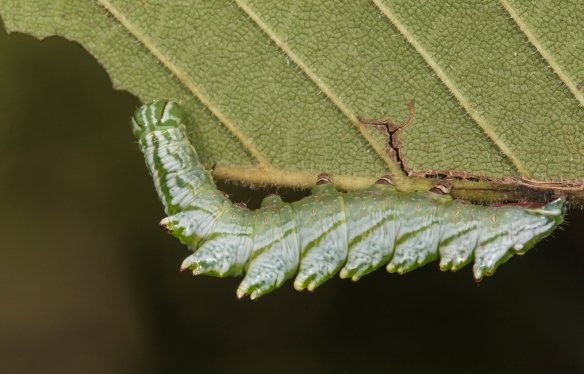 Larger larvae appear lighter in color, and seem to feed at an angle that puts them slightly under the leaf. The leaf underside is lighter in color than the top, so maybe this is why. The larvae also have angled stripes along their sides which mimic the venation of the leaves, adding to their effective disguise.

While looking at other elm saplings, I came across another species that seems to mimic both the leaf edge and the twigs of its host plant. When viewing the dorsal surface of a double-lined prominent (Lochmaeus bileneata), the reddish-brown color resembles an elm twig. 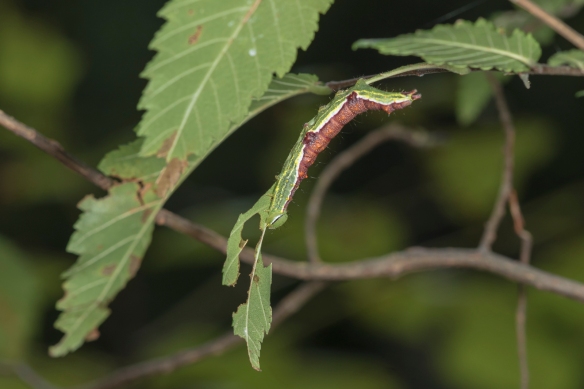 The light stripes may mimic the leaf petiole

When viewed from the side, the white and yellow stripes along the cater[pillar’s body look like the mid-vein of a leaf, and the brown resembles dying leaf tissue.

Even the head stripe helps in the disguise

The feeding position (head towards the tip of the leaf, body along the mid-vein) reinforces the effectiveness of the cryptic pattern and colors, with even the stripes on the head capsule resembling part of the angled leaf venation. I suppose it should come as no surprise that I can spend hours wandering around the yard, amazed by the small wonders all around me. I hope you all can spend some time outside this holiday weekend and discover wonders of your own.