There was no variation in his manner of proceeding all the time I observed him. He was alert, cautious, and exceedingly methodical.

~John Burroughs, on observing a chipmunk, 1894

On our recent mountain trip, we camped at Hickory Ridge Campground at Grayson Highlands State Park.  In addition to several maple, birch and (appropriately) hickory trees, there were a lot of northern red oaks.

Like back home, it appears to be a good mast (the nuts of forest trees) year at the park. And that means lots of activity by the forest dwellers to gather, eat, and store these nuts. We saw several gray squirrels working in the trees and underneath, but, the dominant forest floor activity, by far, was the busy to-and-fro movements of Eastern chipmunks, Tamias striatus. Both mornings in camp, while sipping our morning coffee and tea, we enjoyed watching them going about their busy lives.  They had definite paths from one tree trunk to another, often ending atop a boulder where they were feeding. But, the second morning, I saw one do something you don’t think of a ground squirrel doing…

This chipmunk was a real tree climber

…climb a tree. I remember the first time I saw that years ago was when one of my dogs startled a chipmunk out in the yard. The little chippie ran straight up a tree trunk to a height of about 20 feet, then turned and scolded us both. Turns out, many Eastern chipmunks are regular tree climbers, either to escape danger or to collect nuts like acorns and hickory nuts.

Eastern chipmunk eating something on its shelf fungus perch

This particular chipmunk had a routine that took it from foraging on the ground under some scattered trees, up the back side of a black locust tree near our campsite, and then out to a shelf fungus projecting off the tree just beneath a fork in the trunk. The first time I saw it, the fungus was in the shade, and the chippie dropped down onto the ground right as the rising sun was about to illuminate its perch. But, being creatures of habit, it soon returned and proceeded to feed on some small morsel it had scavenged on the ground.

This chippie had two trees it liked to climb

On its next trip to the ground, it scurried through the leaf litter about 75 feet and climbed a different tree and soon perched in a prominent spot atop a broken limb. 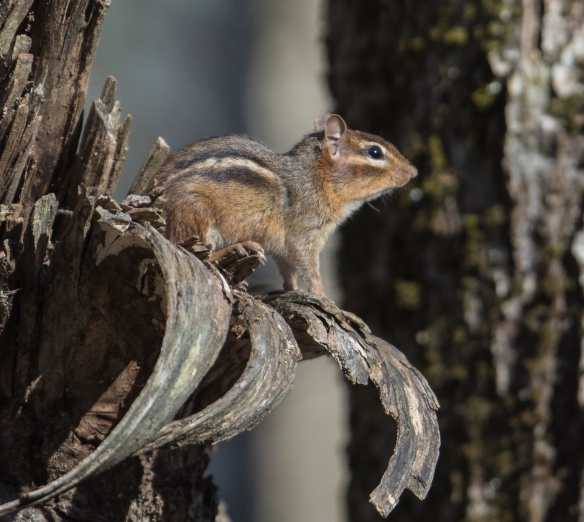 Always on the alert for danger

This tree had a large cavity in deep shade near this broken limb, and the chipmunk visited that area a couple of times as if storing some food from its cheek pouches. But it would always pause on the broken limb and look around for potential danger (and to see where that guy with the camera had moved to). 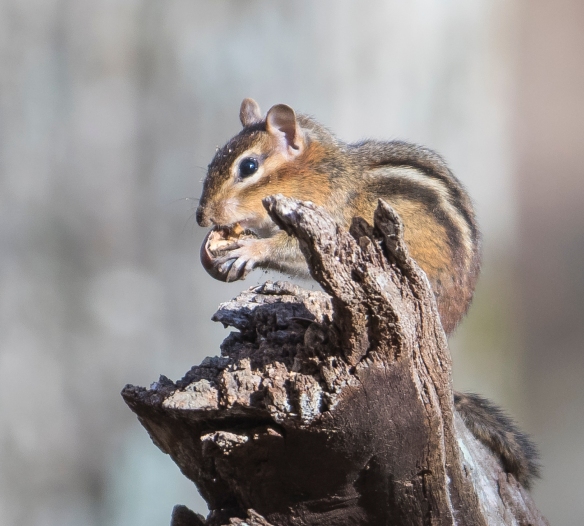 Chowing down on an acorn

After one foraging foray, the chipmunk returned to its perch with an acorn. Naturalists have observed that Eastern chipmunks are capable of carrying as many as 6 acorns at once in their cheek pouches and mouth, but this little guy seemed content with just one at at time. After chewing on it for a minute or so, the acorn fell to the ground. I’m not sure whether the drop was by choice or by accident, but the chipmunk didn’t run off to retrieve it. Instead, it began what some say is its second favorite activity… 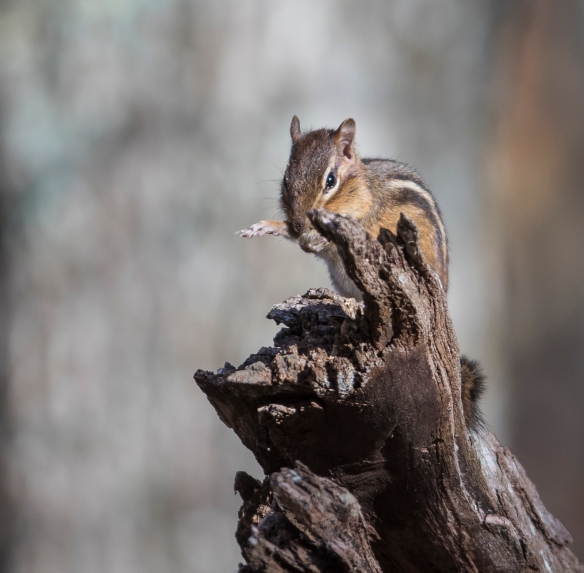 When not foraging or on alert, chipmunks are often grooming

…a bout of grooming. This chipmunk did a lot of grooming on both of its tree perches, but the motion is so fast that my image was usually blurred in the low morning light. After taking way too many photos of our cute little friend, I finally had to put away the camera and finish packing up the gear. All the while, the little striped ground squirrel kept up its busy pace of feeding, grooming, and looking for danger. Indeed, as Thoreau observed one autumn (in 1858) at Walden Pond, What a busy and important season to the striped squirrel! [He] is already laying up his winter store.

Post script – Ironically, as I finished writing this, I heard both a gray squirrel and a chipmunk giving alarm notes out back. I went outside expecting to see either a hawk, snake, or cat, but found no sign of a predator still around. The low-pitched clucking note of chipmunks is a woodland sound that fooled me years ago when I first heard it, thinking it was some sort of bird. Listen here for the various chipmunk alarm calls. The note I just heard occurs after the high-pitched chipping alarm on this audio file. Research shows a tendency for the high-pitched notes to be given when a terrestrial predator is spotted, and the low-pitched notes when an aerial predator is nearby.

2 thoughts on “Ground Squirrels in Trees”