…more different species of animals have been recorded at the Reserve than in any other comparably-sized area in the entire Piedmont.

It is an idyllic place in an otherwise rapidly developing region of our state…it is Mason Farm Biological Reserve. Mason Farm is about 367 acres of forest, fields, and wetlands that is administered by the North Carolina Botanical Garden as both a natural area and biological field station. Visit the web site to learn about access and the history of the site, as well as details on visitation, current management, and the flora and fauna that call this place home.

I have been visiting for a number of years and almost always find something interesting to observe in addition to the beautiful setting, nice trail, and peace and quiet. My last visit was no different. A little over a week ago. I went over one afternoon to walk the two mile loop and see what I could see. It was cool and sunny, and for most of the walk, I was alone on the trail. 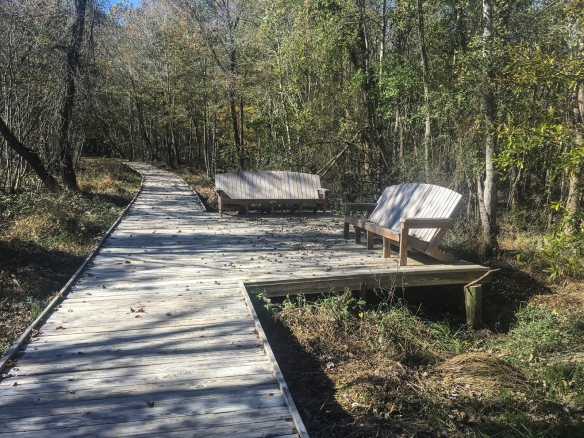 Boardwalk and benches along the trail

I sat on one of the benches for awhile, enjoying the movement of small birds (including a winter wren) and the call of one of the local barred owls back in the woods. As I continued along the trail, I decided to gently roll a log to see if anybody was home. 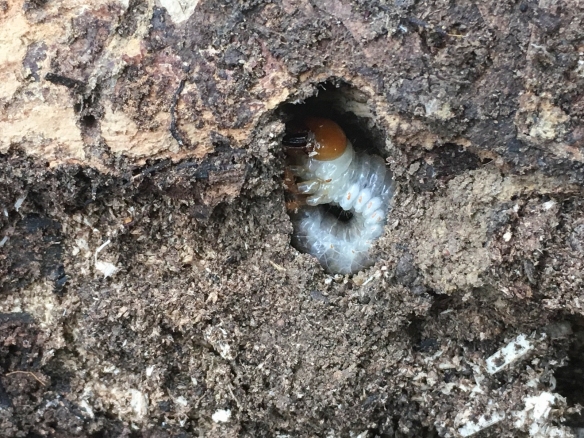 Beetle larvae are common under logs in these woods

My first find was a large beetle grub. There was a Bess beetle adult under that same log, so I am guessing that is what this one is (plus, when I examined the photo, it looks like one of the pair of legs is reduced in size, which is a hallmark of the larvae of Bess beetles).

The next log had another treasure – a marbled salamander.  This is one of the so-called mole salamanders, and they are frequently found in tunnels under logs in forested habitats. This one was about 4 inches in length and is probably a female, based on the silvery gray crossbands (males tend to have bright white crossbands).

Salamanders have such likeable faces

There is something very appealing about the mole salamander group (and, really, salamanders in general). I think it is their large eyes and a mouth that makes them look like they are perpetually smiling. I took a couple of quick photos and gently rolled the log back in place after the salamander disappeared down into a burrow.

A couple of weeks ago, on another hike at Mason Farm, a group of us had found a mud salamander under a log in this same area. I wondered if it might still be around, so I walked over and rolled the log, and, to my surprise, it was still there. 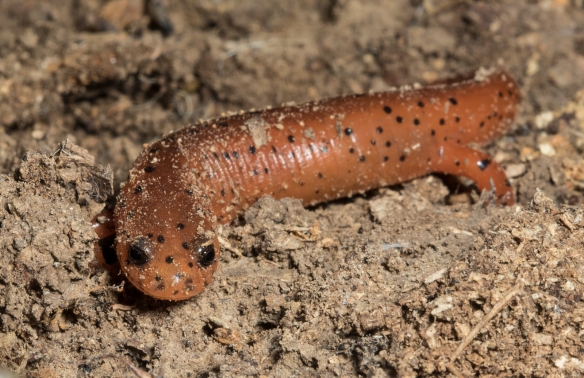 Mud salamander looking at the camera

Mud salamanders are a species I don’t find very often so I definitely wanted a few pictures. These large reddish salamanders (this one was about 5 inches) have black spots scattered along the colorful body. Their dark eyes help distinguish them from the similar-looking red salamander, which has yellow irises. They feed on worms, small invertebrates, and, occasionally, smaller salamanders. After observing this beautiful creature for a couple of minutes, I rolled the log back, and tucked the salamander up against it so it could crawl back under to safety. 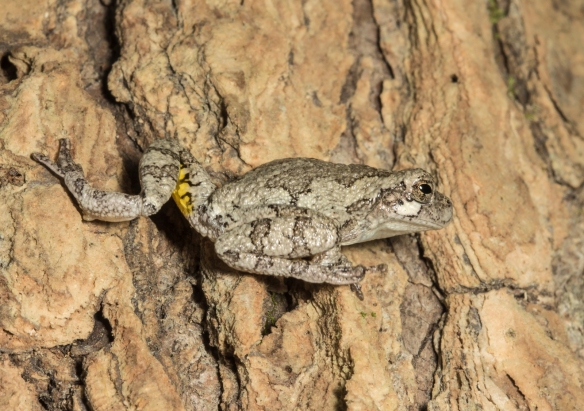 Satisfied at my two amphibian finds in such a small area, I continued walking. I soon spotted a splash of red against a sea of brown trunks and fallen leaves. It was a Virginia creeper vine on a tree trunk highlighted by the afternoon sun. I walked over for a closer look and as I approached the tree, I saw movement…a Cope’s gray treefrog clambered around the trunk trying to hide.

The perfect perch on an autumn day

I followed it around and as I moved in for another photo, the frog jumped, landing on the red leaves that had brought me over in the first place. Well done!

I grabbed a few more images and left the frog in peace to enjoy the warmth of the sun. This may be the last chance at sunbathing this November amphibian will get for a few months. And I headed home, satisfied by another rewarding afternoon of woods-watching at Mason Farm.