Natural, ambient sounds give us a picture over time and define place…every landscape has a rhythm to it.

There is, indeed, a rhythm to paddling in a swamp, and the sounds help define it. Putting our canoes in at Gardner Creek a couple of weeks ago, we could hear the sounds of traffic on Hwy 64, the tones of people talking, the harshness of barking dogs and a lawn mower – all human sounds, or perhaps I should call them noises. But as we paddled, those noises started to fade and we soon had a rhythm of the place in our ears – water dripping from our paddles, the twitters of a mixed-species feeding flock moving through the trees, or the kerplunk of a turtle dropping off a log. We even heard the truncated calls of a few Southern leopard frogs, since the air was a bit warmer than the calendar date indicated. But, the true sounds of the swamp on this trip came in feathered form, one during the day, and one day and night (although certainly more forcefully after darkness enveloped our campsites on the platforms). Listen to the two audio segments below (recorded on my phone) and see if you recognize the makers of this music of the swamp (answers are below, play at full volume and don’t cheat)…

The first sound is one heard on several occasions as we paddled the waterways in this region, usually heard several times before we would catch a glimpse of the source, if at all.

This call-maker is one I will always associate with this place, and almost any swamp I have visited. These hunters call day or night, and have an amazing repertoire of vocalizations. This is a variation of their best known call.

Now, here are the sound-makers…

A characteristic daytime call of the swamp is the harsh, Kee-aah, Kee-aah, made by the red-shouldered hawk, Buteo lineatus. The call is accented on the first syllable with a drawn-out second syllable having a downward inflection. It is considered a territorial call in the breeding season, and is also an alarm call. We generally heard it when one of these common swamp hawks took flight as we paddled nearby.

Red-shouldered hawks are smaller than red-tailed hawks and tend to favor forested tracts, especially along streams and rivers. They are sit-and-wait hunters, whose diet includes many reptiles, amphibians, small mammals, and invertebrates such as earthworms. 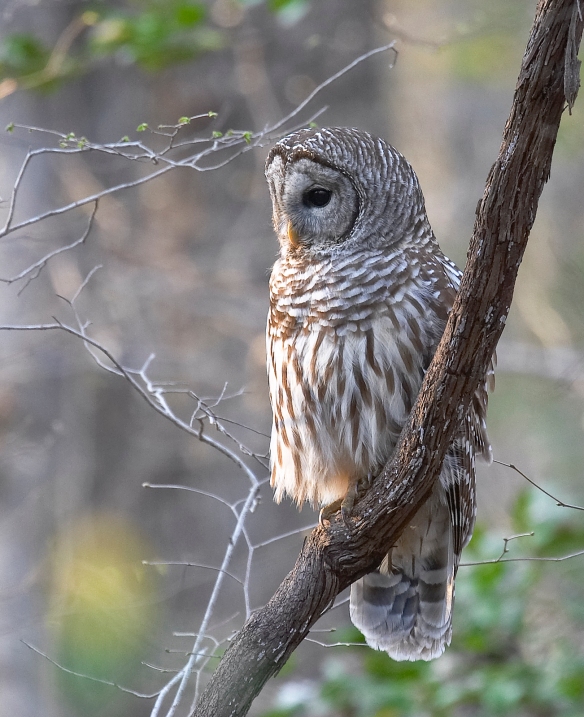 The barred owl, Strix varia, is the monarch of the swamp. Their best known call is often described as sounding like “Who cooks for you, who cooks for you all”. The call presented here is a variation and is described as an Ascending Hoot. The audio has the back and forth calls of two owls on our first night in the swamp (at the aptly named Barred Owl Roost camping platform). One is right above our campsite, the other maybe 100 feet away in the darkness of the swamp. 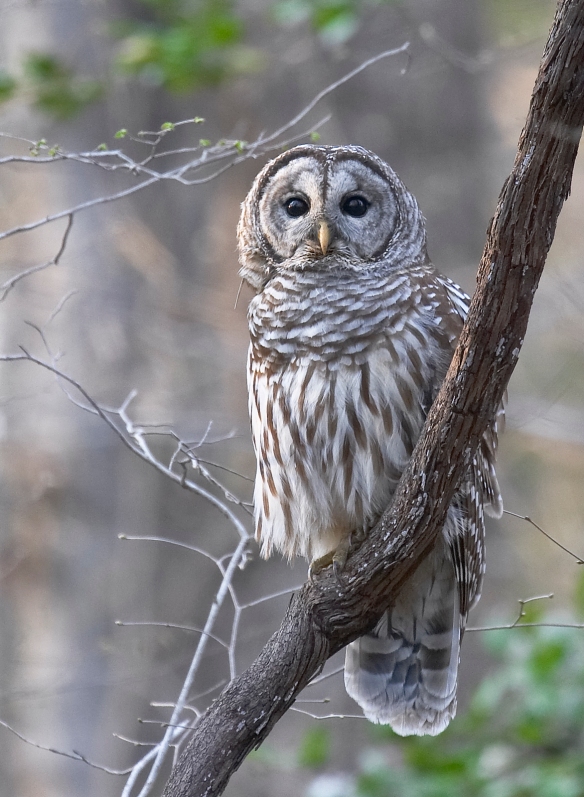 This back and forth calling likely is between a mated pair. We also heard some of their other calls that night, including the Single Hoot (a throaty descending hoot), and the cacophony of sounds that is often described as a Raucous Hoot and Caterwauling. The latter calls can vary from a high-pitched scream to monkey-like sounds, and can carry on for a minute or two. Unfortunately, the owls engaging in the raucous calls that night were too far away to be picked up by the mic on my iPhone.

The soundscape of a wild place is something we often overlook, but it is one of the things that can really make an outdoor experience memorable. I am grateful for these swamps and the opportunities for the unique camping provided by the Roanoke River Partners. And I am thankful for the sounds that seem to stay with you after any time spent in these special habitats. Be sure to listen for the iconic sounds of your favorite places on your next outings.