At this season Nature makes the most of every throb of life that can withstand her severity. How heartily she endorses this fox!

Hayden Valley is one of my favorite spots in winter, with its gently rolling hills covered in deep, smooth snow, interrupted only by an isolated tree here and there and the tracks of some animal wandering across a seemingly endless blanket of white. As our snow coach pulled away from the river’s edge and started to climb a hill, we saw another coach headed our way that had stopped, photographers out along the road. Moving steadily away from them (and us) was a gorgeous red fox in great low angle winter light. The other group was headed back to their vehicle as we jumped out, and I admit I was frustrated that this beauty was soon to disappear over the hill toward the river.

We waited, and watched. In a short while, the fox came trotting back over the hill toward us and then plopped down in the snow, eyes squinting against the bright light, looking incredibly regal in its luxuriant fur coat. 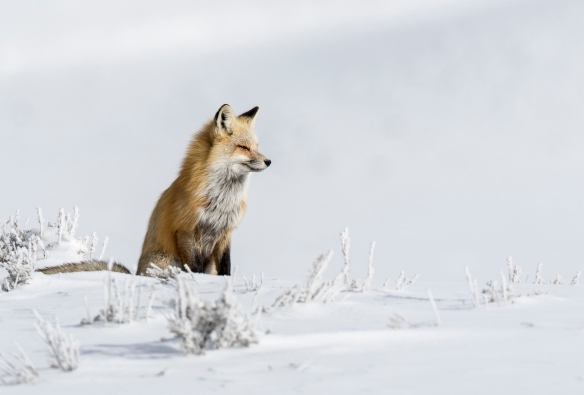 The fox sat for a few minutes, surveying the scene

Most red foxes in the lower 48 states (especially East of the Rockies), are believed to be a subspecies introduced from Europe in the 1700 and 1800’s for hunting and fur farming. But, there are also native subspecies that occur at high elevations in Yellowstone (generally above 8000 feet in the park) and other northern regions. The latter tend to be lighter in color and are known as mountain foxes. This fox was full-on red – an incredibly beautiful animal, and the scene we were lucky enough to see it in was equally stunning.

As it moved across the snow, the light brought out the rich colors of the fox’s fur 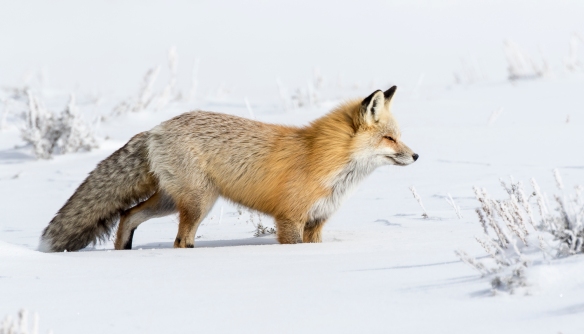 Though it usually was able to walk on top of the snow, the fox sank deep at one point and paused for a few seconds

As we walked along the road, the fox moved steadily across the snow field. Periodically, it paused, and I kept hoping for the classic fox snow pounce, an arching leap ending with a head plunge into the snow to grab an unsuspecting creature tunneling beneath the white surface. But, it never happened. 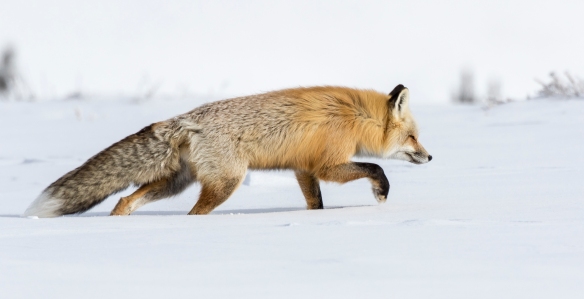 The fox continued walking, stopping occasionally to sniff and listen

The closest we got was a nose plunge, but I’ll take it. Fox sightings have increased over the years since the reintroduction of wolves. Wolves keep coyote numbers in check, Coyotes kept fox numbers down. Fewer coyotes, more foxes. 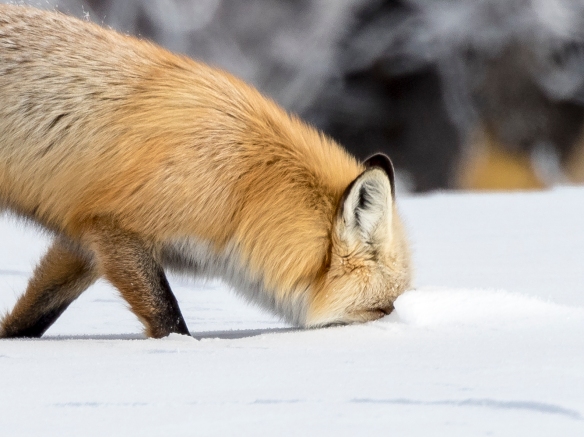 It paused, looked down, and stuck its snout into the snow

Finding nothing, the fox sat back and looked around

After glancing back our way, this beautiful animal headed back over the hill

These are the moments that stay with me, the chance to observe a beautiful wild creature going about its life, seemingly unconcerned by our presence. It is a rare treat enhanced by the fact that it happened in a spectacular location and was shared with good friends. How lucky for us all.