The world and the universe is an extremely beautiful place, and the more we understand about it, the more beautiful does it appear.

Memories of Yellowstone are still lingering in my head…the scenery, the snow, the quiet, and the incredible wildlife. So, I did what I needed to do for my spirit last weekend, and headed to Pungo for the day. What better way to reinforce that feeling of wildness, the freedom that comes from being outside with countless wild creatures, than to go to my favorite spot in North Carolina, the Yellowstone of the East – Pocosin Lakes National Wildlife Refuge. Melissa was out of town, so I did a solo one day trip, leaving home at 4:30 a.m. to get down there close to sunrise. When I pulled in, the morning show had already started… 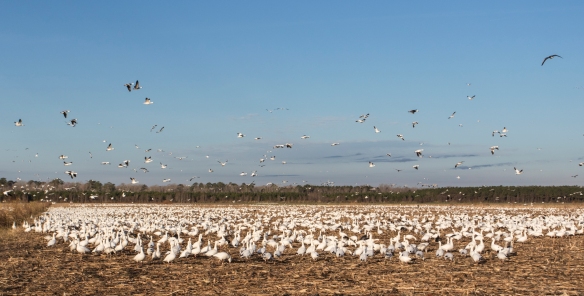 Snow geese, mixed with a flock of tundra swans, filled one of the fields close to the maintenance area. I pulled down on the side of the field where the low angle morning sunlight was hitting the birds, stopped the car, and watched as thousands of white forms moved through the fresh corn stubble in a feeding frenzy. The birds were close to the road so I could hear that mechanical sound made by thousands of snow geese grunting, squabbling, and gleaning kernels of corn from the field. 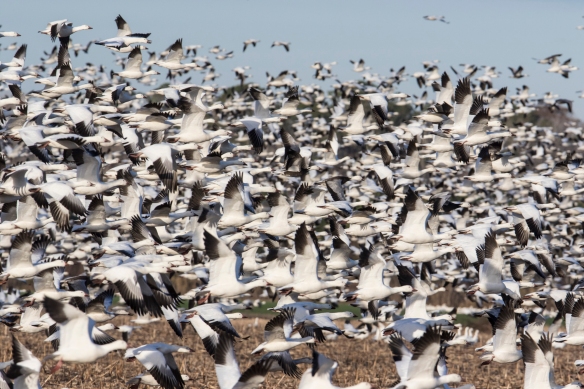 A blast off close to the road

Suddenly, they all blasted off, circled the field a few times and started to land closer than before. I scanned the skies, and soon saw the cause of all the commotion… 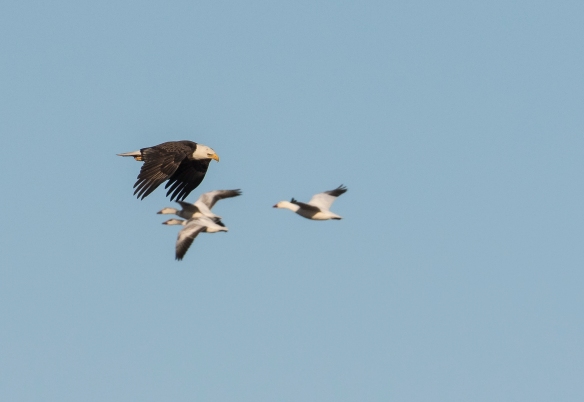 The cause of the blast-off, a cruising bald eagle

An adult bald eagle was flying across the field, looking over the flock for any possible weaknesses. When it got to the other side I saw two more eagles, perched, waiting, hoping for a chance at a goose breakfast. 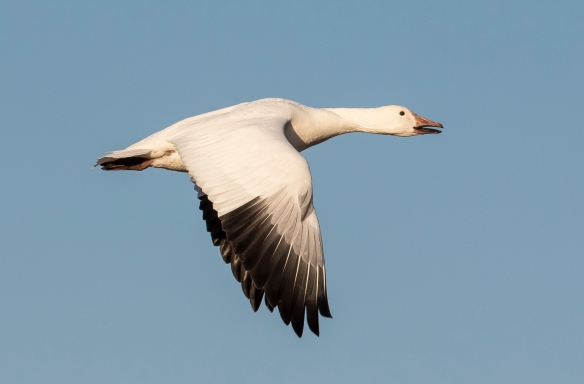 The light was perfect for photos

A car drove by and spooked the eagles, so the snow geese quickly calmed down and started making short flights to leapfrog ahead of the moving mass of white to get to untouched spilled corn. This allowed me to get several nice views of them flying by and landing in beautiful light. 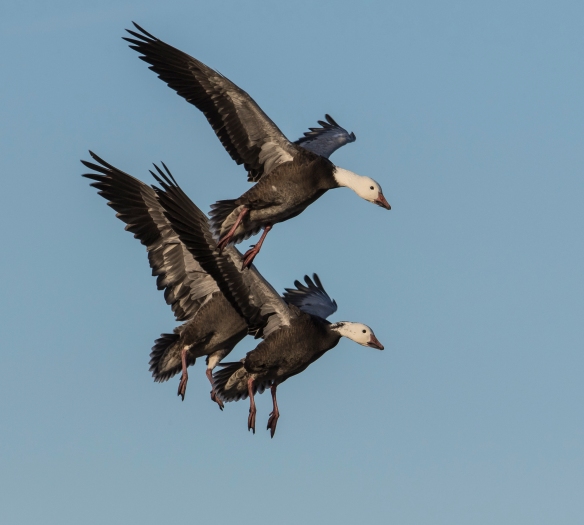 Blue phase snow geese coming in for a landing 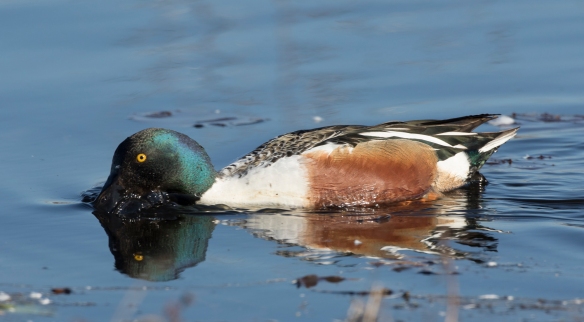 Northern shoveler ducks were abundant in the marsh impoundment

I drove on to the lake and was surprised to see very few swans. The impoundment was also relatively quiet (only a couple of hundred swans), but the shoreline was crowded with ruddy ducks and northern shovelers. 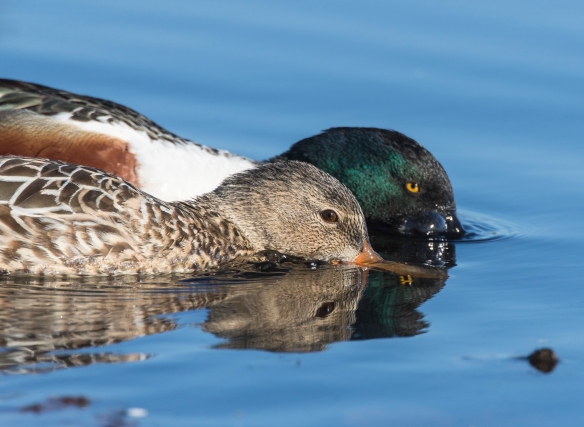 Pairs of northern shovelers were feeding together in tight circles

As I pulled in to a spot and parked, the ducks moved away in short flights, but soon returned as I sat in the car, camera out the window. This is where I see many people make a mistake and get out of their cars for a better view. If you use your vehicle as a blind, the birds will often return faster and you usually get a better image. 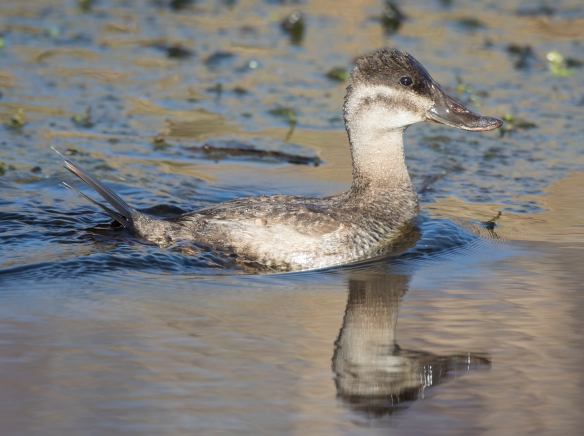 A ruddy duck in a canal next to the road

Mid-day found me over at Mattamuskeet. Things were very quiet there with high water in the marshes along Wildlife Drive leading to fewer waterfowl than usual. I did notice several swan carcasses in the shrubbery along the entrance road…bobcats perhaps? 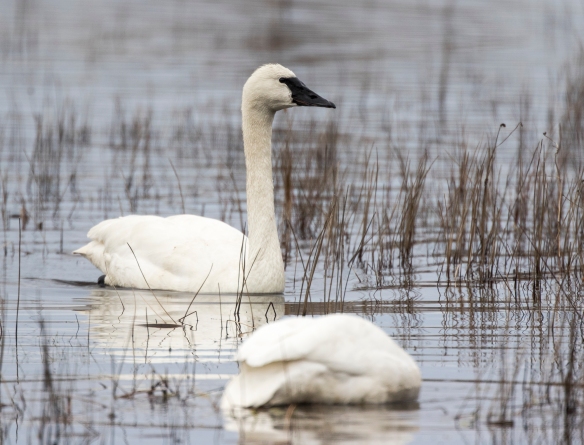 Swan at Mattamuskeet – Trumpeter or Tundra?

On the back loop of Wildlife Drive, I stopped to photograph some swans and in looking at the images a little later, found one that resemble a trumpeter swan – longish bill, no yellow on the bill (not always a guarantee it isn’t a tundra swan). What do you think? 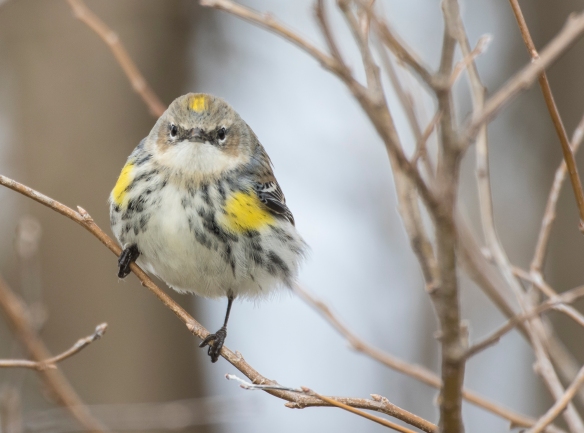 What are you staring at?

I cruised slowly along the shrub zone, looking for song birds, and, at one point, found a group of yellow-rumped warblers moving through some wax myrtles and sweetgum saplings. They always seem to have a bit of an attitude when they stop and look at you.

Back at Pungo, the wintering sandhill cranes

I returned to Pungo at about 4 pm, a little later than I hoped, but just in time for the start of the evening show. There were vehicles near the refuge entrance observing a few thousand swans out in the winter wheat so I drove on toward D-Canal Road where a local farmer had been cutting the last remaining standing corn in one of the refuge fields earlier. I hoped the birds would find this fresh food supply. I got down there and had several hundred swans in the field all to myself for awhile. A car finally pulled up and the occupants got out and walked into the field a short distance to take selfies with the birds in the background. You can imagine my thoughts…I pulled up to them, admonishing them for walking out toward the flock and spooking the birds. I suggested they should stay in their vehicle for a better look and not disturb the flock. To their credit, they offered an apology and got back in their car as I drove off. As I drove by the adjoining field, I saw the familiar stooped posture of feeding sandhill cranes in the fresh cut cornfield. No doubt the same three birds we had seen on the Christmas Bird Count several weeks ago. 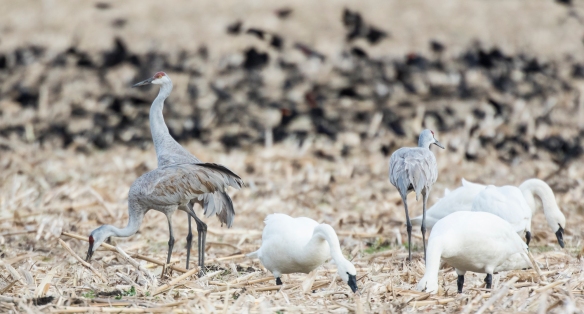 Cranes sharing the field with swans and red-winged blackbirds

The cranes were soon joined by several hungry swans and hundreds of red-winged blackbirds. As I watched, I heard the sound of approaching snow geese. I looked up and could see thousands of birds coming in from high up in the graying sky. This is why I keep coming back – this spectacle of the birds in winter at Pungo is unlike an other wildlife experience in North Carolina. 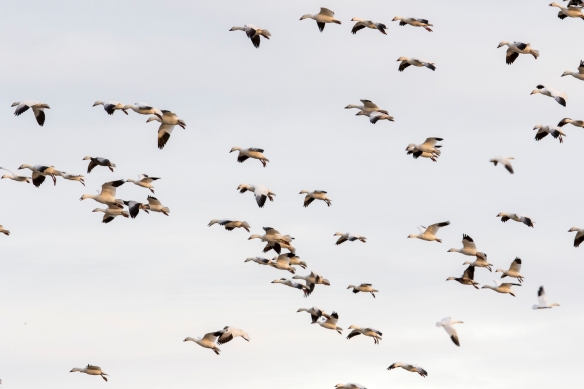 I love the sounds and sights of a huge flock of snow geese, swirling above a field, and gradually coming down. 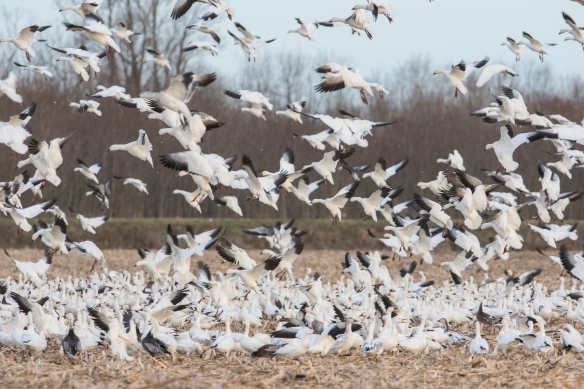 Landing in a swirl of wings

I am always amazed they seemingly aren’t landing on top of their flock-mates, but maybe that’s what all the noise is about – snow goose warnings. 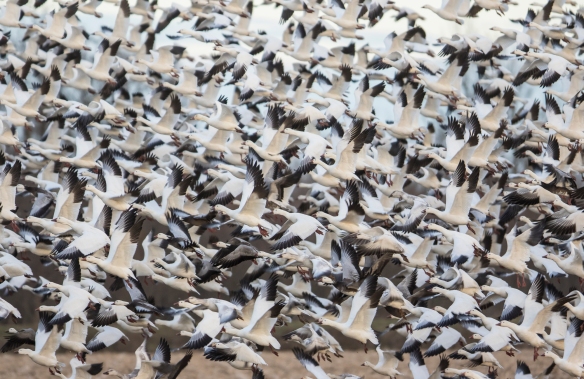 After feeding for many minutes, something caused the massive flock to explode from the field in a wall of black and white feathers. That sound is one of the most amazing, loud, whumpfs in nature. I may not get back down this winter before they all start their long journey northward, but am thankful for this incredible day in this amazing wild place.