Wow, what a planet!

I’m going to post something a little different this morning. A brief tribute to my dear friend and mentor, Mary Ann Brittain. We attended her memorial yesterday at her beloved Pullen Memorial Baptist Church in Raleigh. It was a beautiful, hopeful, memorial to one of the most amazing people I have ever known. She was full of grace, kindness, laughter, and had an endless curiosity about the natural world (and all another aspects of the world we live in). In looking for some images to include, I sadly realized that most are in the files of the museum as digitized slides from my early years at that amazing institution. So, I’ll just share a couple I still have (those who know me, know I have few people pictures among my thousands of images, and this is one of those times I regret that). And I will only share a tiny bit of Mary Ann’s impact on me this morning (to tell it all, would require a book, a book that is still being written).

I met Mary Ann while I was working as a naturalist/educator for NC State Parks. Back then, we were sometimes stationed at popular parks far from our usual station on busy holidays to serve as roving interpreters or to provide programs to visitors. I was at Mount Mitchell State Park one Fourth of July when this woman approached me and asked about the skeletons of fir trees scattered across the mountain. Scientists were discussing the impacts of acid deposition on high elevation forests in the southeast at that time and the impacts of the introduced Balsam Woolly Adelgid as a factor in the die-offs of Fraser Firs. But, many visitors assumed there had been a fire. After discussing this with Mary Ann, she emphatically said we should be interpreting the science to the public to make them more aware of the issues. What could I say? I had to agree. So, we discussed it back in Raleigh and over the next several months a display was developed and installed on Mount Mitchell about “What’s Killing the Trees?”. 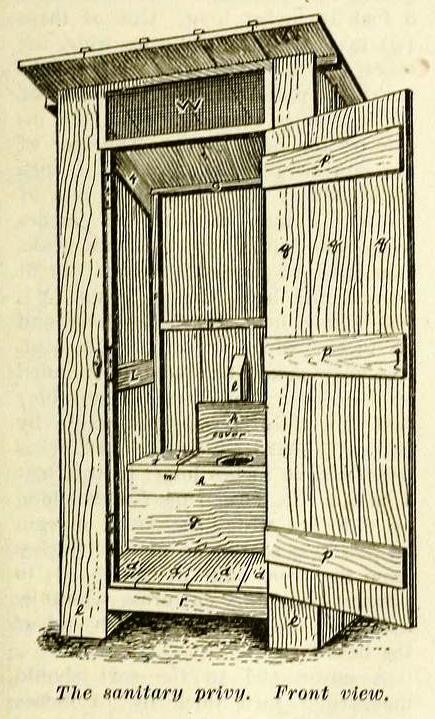 My career with Mary Ann began with a call about this…

I don’t remember the exact timeline, but some months after that, I got a call from Mary Ann. We chatted for a moment about our meeting at Mount Mitchell, and then she got to the reason for her call. She had a farm in Franklin County with a small cottage on it as a weekend retreat, and she needed to build an outhouse up there. She had pondered who might have plans for an outhouse. State Parks has outhouses, she thought. Who did she know in state parks? That guy she met at Mount Mitchell (me). During the conversation, she mentioned the potential for hiring an education position at the museum. Thus began my 24 years in the best job that state government has to offer (and she got her plans for an outhouse).

I put this in her tribute only because Mary Ann loved to laugh, and helped everyone around her to find the humor in our daily lives. Her friends and family shared many stories yesterday about the crazy shenanigans that Mary Ann got us all involved in over the years. 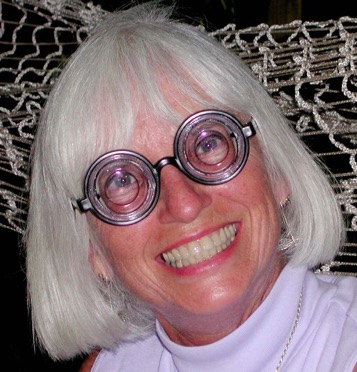 She was a woman of vision (my nickname for her was “The Force”) and worked tirelessly to make good ideas into reality. Her background in social work helped shape her amazing abilities at bringing groups of people together for a common purpose, be it reaching across social barriers, or helping you get outside of your comfort zone to see the world with a new set of eyes. All of her former museum co-workers smiled as we entered the church yesterday and saw a flip chart with instructions to make a name tag for the service. As our friend, Liz, mentioned in her tribute to Mary Ann yesterday, if only the pews could have been arranged in a circle…the classic arrangement for seating a group of people and classic Mary Ann. 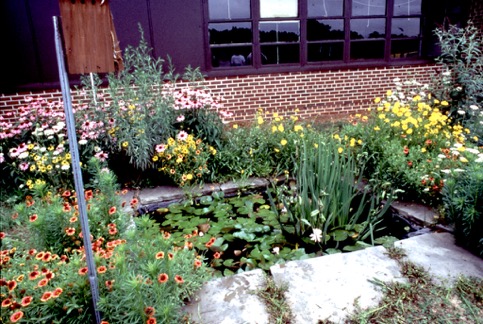 Habitat components at a UTOTES school

When I started at the museum, I went with Mary Ann all over the state for 3-hour workshops that took teachers outside the classroom walls to get them excited about using plants and animals to teach all sorts of subjects. She lamented the fact that 3 hours just wasn’t enough time to make a real difference, so she came up with the idea for a program to provide teachers with workshops at their schools over the course of many months. After convincing some people in the state’s education department of the value of such a plan, the successful UTOTES (Using The Outdoors to Teach Experiential Science) program was born with a huge NSF grant. Thousands of teachers have now been through the program, helping to introduce tens of thousands of NC students to the wonders of nature with the simple idea of exploring and teaching outdoors. I like to think that it has helped shift the views of a lot of people for the need to learn about, care about, and help conserve the world we live in. The signs shown below went up at UTOTES schools after teachers took their students outdoors to learn about some common schoolyard critters we had shared in the workshops. To me, it is just one example of how powerful direct experience with nature can be. When observed closely, even the sometimes unloved wild creatures can be beautiful and fascinating, and those experiences can foster an understanding and appreciation for the entire natural world. 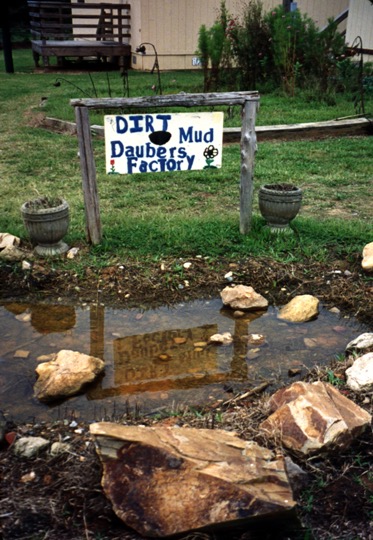 Perhaps the only mud dauber preserve in the state 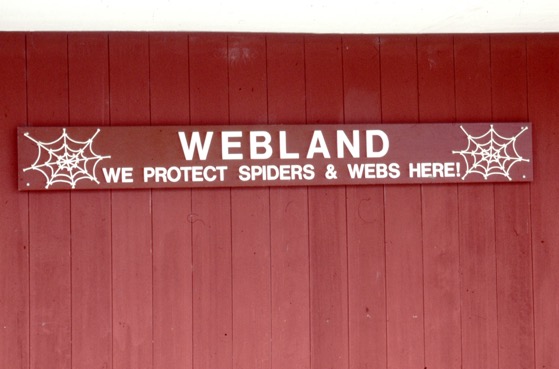 This sign went up after sharing a math activity involving spritzing  (with water) the spider webs in the bushes around the school. The kids fell in love with the diversity of spiders they found.

Years before UTOTES, she had started taking educators to amazing natural areas from NC to Belize to get them turned on to the natural world. She believed that sometimes it requires taking people to far-away places to help them understand the beauty in their own backyards. 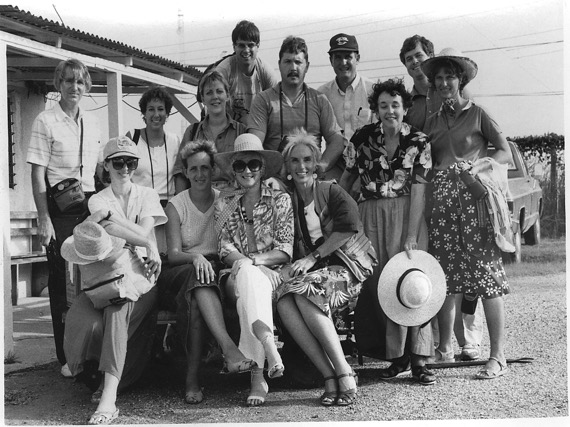 Mary Ann, with the first museum educator group to go to Belize, 1987

The Educators of Excellence program has profoundly influenced hundreds of teachers across the state and still lives on at the Museum, over 30 years after it began.

Wolf-watching at sunrise, Yellowstone (another Educator of Excellence program that continues to influence teachers and their students)

Several years ago, after her husband, Bill, died, she decided to write some words for her own eventual obituary. Here is a selection of those powerful words shared at the service yesterday…

The purpose of life is not to be happy but to make a difference – to have it matter that you lived at all.

You only have to do your part to help with the overwhelming need and hurt on this planet; and you do not have to live wracked with guilt that you cannot do more.

Be full of gladness, and cherish your deep connection to all living things from bugs to bears.

Great words from a great person. As I reflected (something she always encouraged everyone to do) on what I learned from Mary Ann over the years, I realized how hard it is to pay tribute to someone that is larger than life. But, the Mary Ann I knew was always helping people see the world around them in new ways, turning them on to the mysteries and beauty of nature. That is how we first connected. I think back to one of my favorite snippets from a Mary Oliver poem. Mary Ann embodied the spirit of these words…

Instructions for Living a Life

And tell about it she did, with boundless energy and enthusiasm. Thank you, Mary Ann, for helping me (and so many others) find ways to tell about it too, to follow our passion to share the wonders of nature with others, and for being such a tremendous role model and friend. And to all those who knew her, and will miss her, I truly believe she will continue to inspire and shape us. Remember, she never gives up on anything…

May “The Force” be with you.

Mary Ann on a sunrise paddle on the Turner River, Florida