The real jewel of my disease-ridden woodlot is the prothonotary warbler … The flash of his gold-and-blue plumage amid the dank decay of the June woods is in itself proof that dead trees are transmuted into living animals, and vice versa.

This final post on our recent swamp trip is about one of spring’s most enjoyable wildlife experiences, the return of the warblers. As my high frequency hearing has waned, I rely more and more on Melissa’s abilities to hear their songs and locate them. And on this trip, she was hearing them throughout our paddle. And she had her spotting skills in high gear as she came up finding what I thought were the trip highlights – a swimming Mink, two Barred Owls close enough to photograph, some cute Raccoons, the flying squirrel, and a few nesting birds. My challenge was to try to photograph them.  And I find warblers to be a particularly challenging subject. 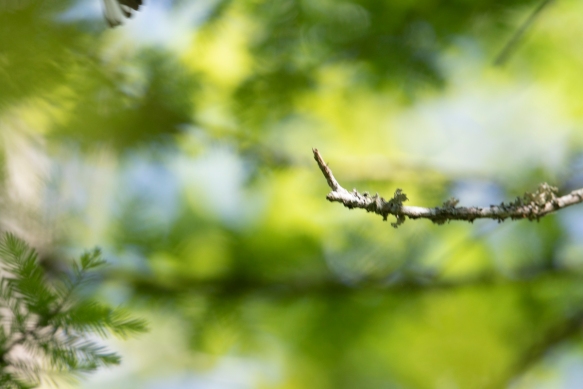 My usual warbler image, mostly of where one used to be – note tail feathers exiting top left of image (click photos to enlarge)

But this trip had waves of warblers moving through the swamp at times. On our second platform at Three Sisters, we had birds all around us our last morning, including a swarm of migrating Yellow-rumped Warblers. The rather drab colors we see on this species in winter have now been replaced by bold black and white and intensified yellows. A throng of butter-butts came though our camp that morning, but most were either obscured in the thick understory brush or high in the tree tops, foraging on insects. 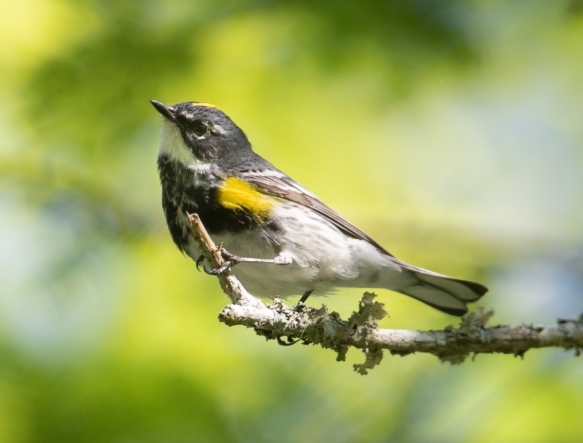 Melissa heard and then found a Prairie Warbler just off our platform and I finally managed a few pictures in the dappled sunlight. 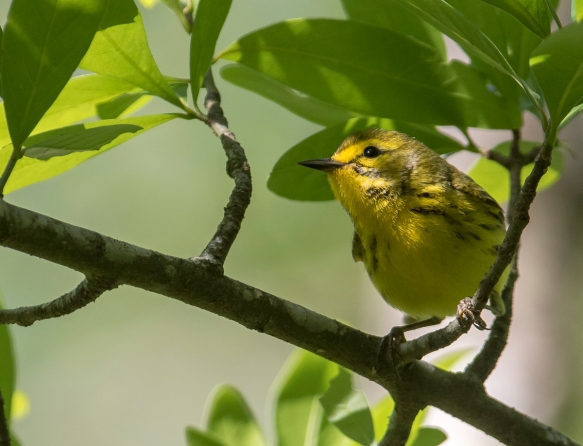 Prairie Warbler skulking through the brush 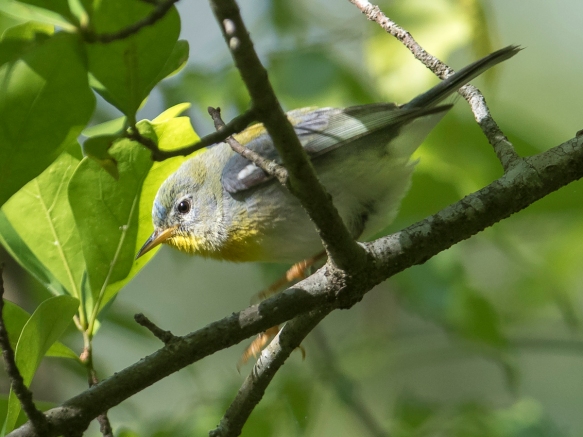 Northern Parula Warblers were everywhere in the swamp, but difficult to photograph on this trip

It turns out, the real photographic test was shooting warblers from a moving canoe. I had my 300 mm telephoto and 1.4x teleconverter on my older camera body with us. Needless to say, I was trying to be careful with the gear and, when paddling, often had it secured in a dry bag in front of me. When we saw something, I would have to open the bag, pull out the camera and then try to shoot from a wobbly canoe (usually in a current) while Melissa positioned us. For some shots, I carefully passed the gear up to her if we could not get the back of the canoe into position. Prothonotary Warblers were singing and displaying all along our route, but when she spotted one carrying nesting material, we pulled over and steadied the canoe on a log in the shallows. The bird did not disappoint. 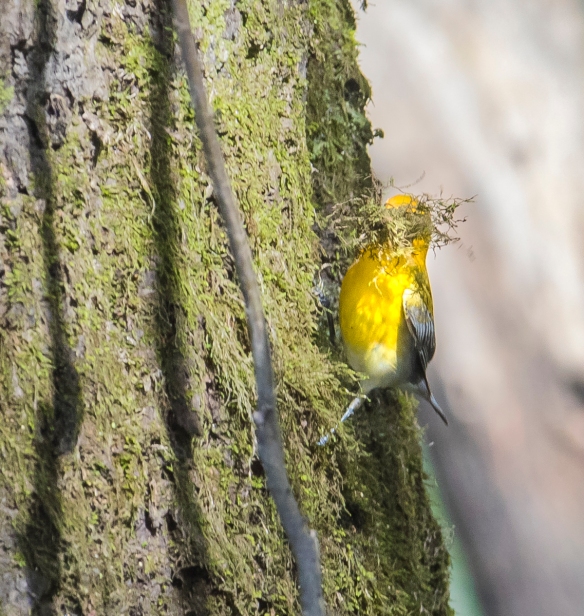 This bird really liked the moss on one particular tree trunk and made several trips to gather a beak full while we watched. 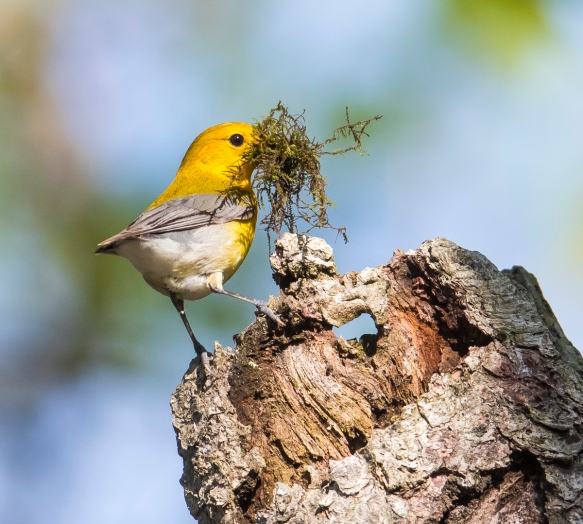 Most trips back to the nest were quick, with a brief landing, and then darting directly into the cavity. On this one though, he (I think it is a he because it is very brightly colored) paused on top of the snag for just a moment. 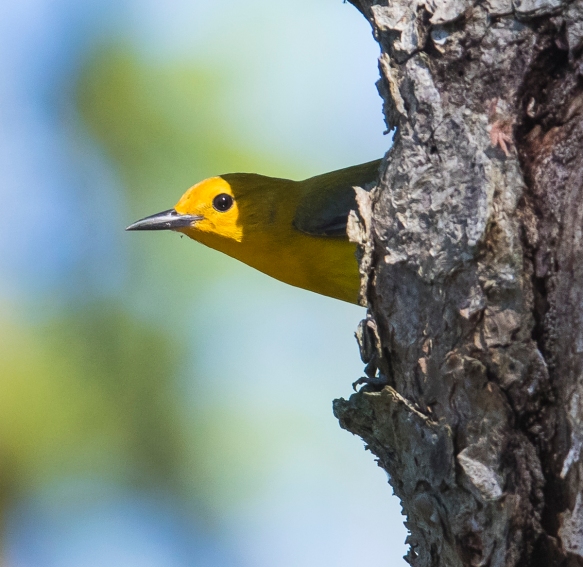 After depositing the moss, he would come out, look around, and then fly off for more. This time, he stuck his head out far enough so that the sun highlighted his face. 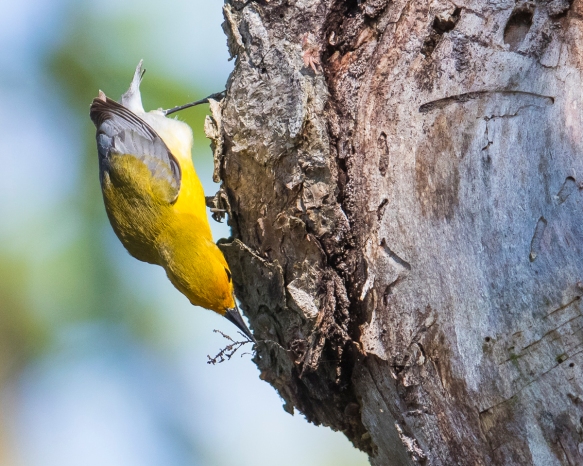 On one exit, he noticed a little piece of moss just below the cavity 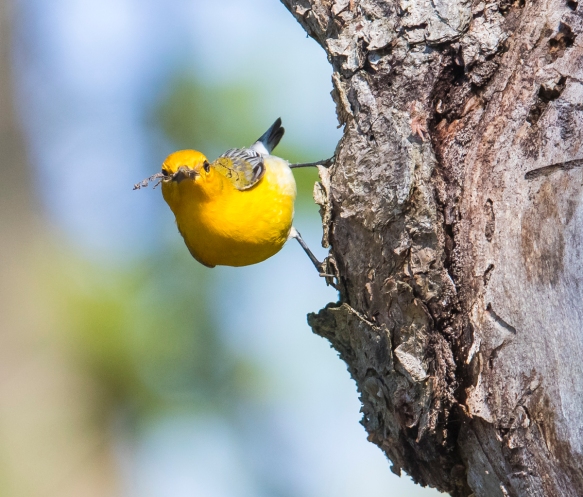 Male prothonotaries arrive first on the breeding grounds and begin setting up territories which they defend. They will select a few choice nesting cavities (and the swamp is full of potential nest holes) and gather and stuff them with moss, hoping a female will approve. We wished him good luck, and moved on as this was a big paddle day for us.

The current was stong and the wind was at our back out on the river proper when Melissa saw what she at first thought was a Northern Parula exiting a clump of Spanish Moss dangling on a low branch over the river (their preferred nest site). We turned and started paddling back upstream when she saw the bird return – it was a Yellow-throated Warbler! 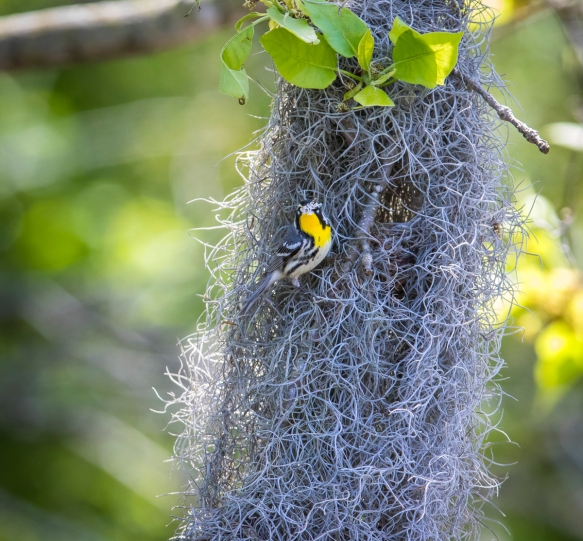 This beautiful warbler is one of Melissa’s favorites, but frustratingly so, since they tend to be treetop dwellers and, though she hears them often (even at our woodland home in Chatham County), we rarely get a decent look at one. And here she finds one nesting, and down low. Cornell’s excellent online Birds of the World resource (for a subscription fee, but well worth it), states It nests and performs most of its daily activities high in the canopy of these forests. The exact location of nests is usually hard to determine. 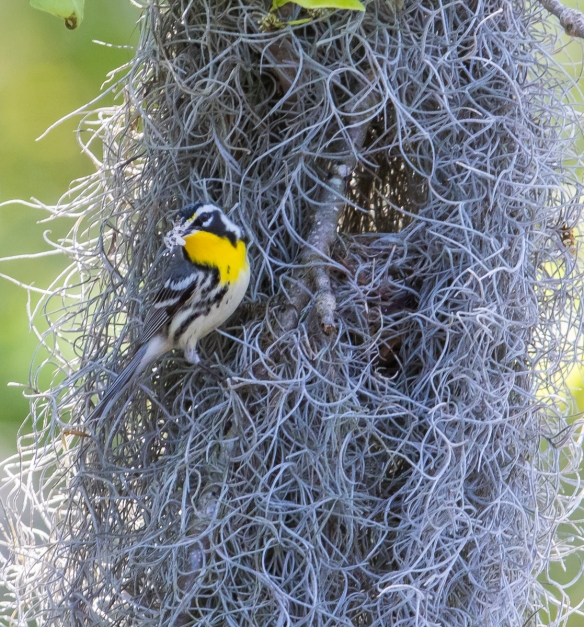 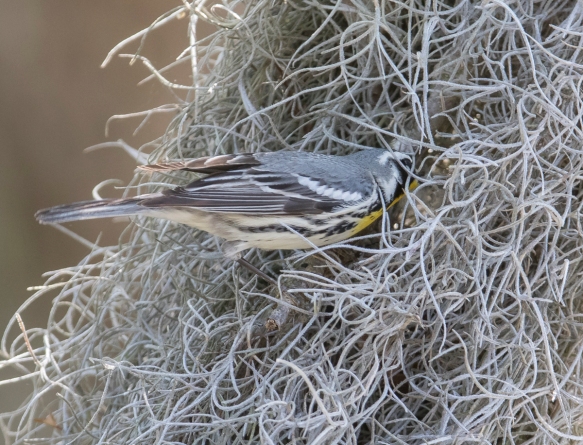 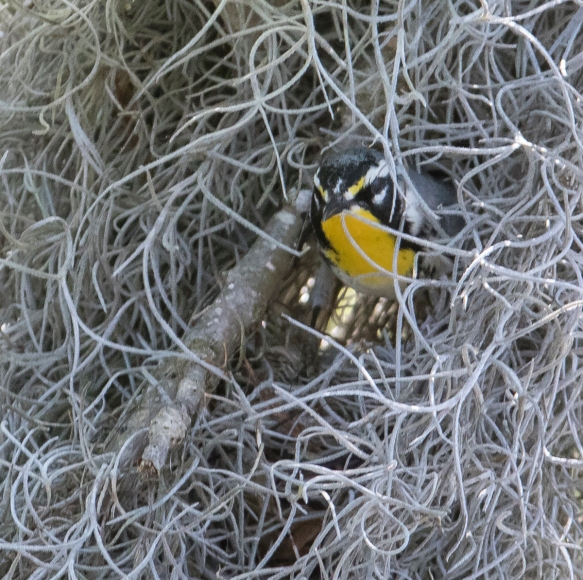 Peeking out of the nest entrance (photo by Melissa Dowland) 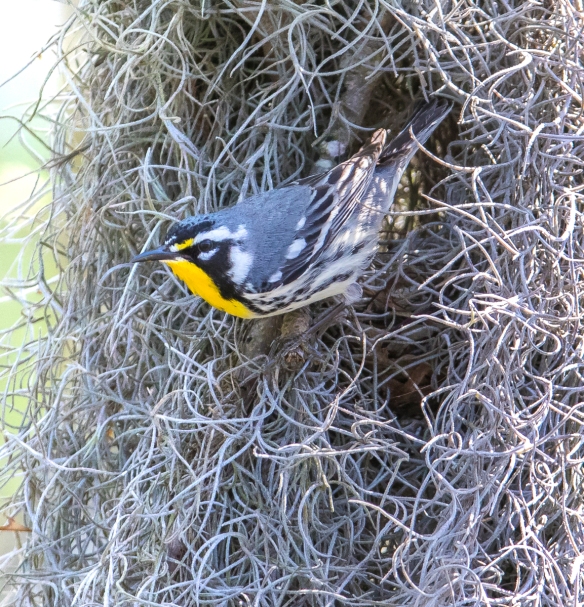 Our final look at an extraordinary bird

Research shows they usually nest out on horizontal branches high in the canopy in mature forests. In coastal areas with Spanish Moss, they prefer to nest in clumps hanging below branches (like Northern Parulas). But the nests of Yellow-throated Warblers tend to be an average of 30-45 feet above ground in coastal swamps. I’d say we were pretty lucky to find this one at about eye level from our canoe. As it turned out, we didn’t have a decent look at another of these beauties on our entire trip. So, thanks for a special moment in a very special place.