Let us turn elsewhere, to the wasps and bees, who unquestionably come first in the laying up of a heritage for their offspring.

They’re back…the wasps flying inside my office window like they did last year about this time. Except now, I knew to expect them and why they are there. Last year, I was puzzled when one, then two, then several small black wasps appeared in my office over a few days in April. After catching and releasing them, I noticed they were all alike, and not the typical paper wasp that occasionally gets inside to overwinter. These wasps had an extended thread-like waist. I soon guessed they must be coming from the dried pitcher plant leaves (pitchers) I had stored in my office. Garden staff collect these old leaves every winter and we use them in educational programming. When you cut open an old pitcher, you can observe the variety of insects that the pitcher plant consumed by examining the dried remains of their exoskeletons (the soft parts are dissolved by digestive enzymes from the plant, leaving behind the hard parts of the bugs like legs and wings). Of course, as has always been the case in my work life, storage is an issue, so I naturally have several bags of these pitchers sitting on a shelf in my office. And that is where the wasps are coming from. 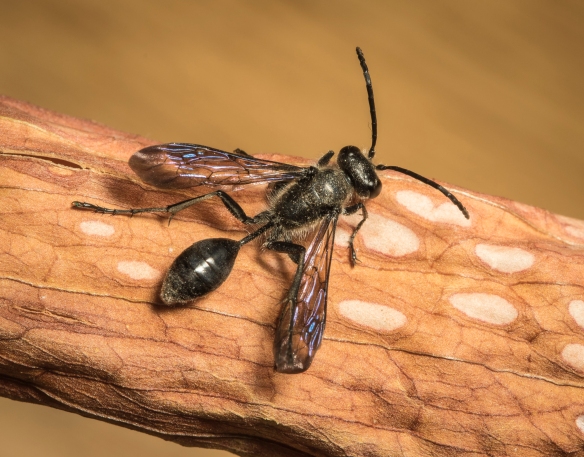 After finding the wasps last year, I did a little research and found out my office mates belong to a group of wasps, known as grass-carrying wasps, that use hollow spaces (like the tubes of pitcher plants) for building their nests. They are members of the wasp family, Sphecidae, the thread-waisted hunting wasps, which provision their nests with prey ranging from spiders to caterpillars (depending on the wasp species). The familiar mud daubers are a relative of the grass-carriers.

In one of our school field trips this spring, a student showed me what she found when dissecting one of the dried pitcher plants – a wad of grass and a little “mummy”. 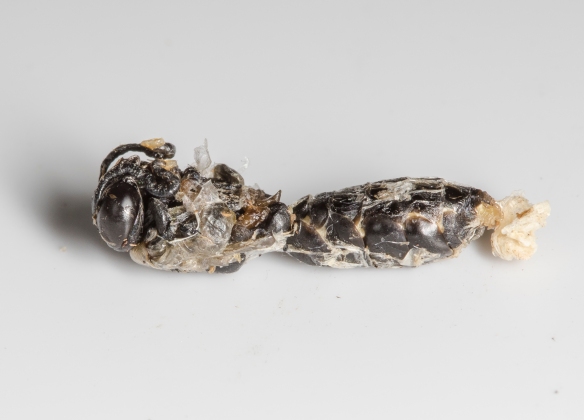 I think she had accidentally pulled the wasp pupa out of its case as she tugged at the debris inside the pitcher plant. The grass is what these wasps use to construct their nest. The females collect grass stems and stuff them inside hollow spaces (pitcher plant leaves, old carpenter bee holes, or even the tracks of storm windows), creating a nest chamber. She then hunts for a prey item, usually a tree cricket, stings it in just the right spot to paralyze it, and brings it back to the nest. After securing it in the grass chamber, she lays one egg on the cricket, then seals off the nest with more grass. After the egg hatches, the wasp larvae eats the cricket and forms a pupa in the grass chamber. The adult wasp emerges and chews its way out of the nest (there are probably two generations per year in our area). They spend the winter as a pupa, emerging in spring (often, inside my office it seems). Not to worry, this species is non-aggressive, and would not sting unless you grab it, so they are easy to catch in a jar and release.

Last fall, I was leading a program when I spotted a blade of grass flying through the garden in the carnivorous plant collection. It was a female wasp carrying a 6-inch piece of dried grass to her nest. We watched as she landed on a pitcher plant and dragged the grass into it through a hole on the side. The next day I went back and photographed her handiwork, with several strands of grass poking out the side of the plant. A goal for this year is to get lucky and grab a photo of a wasp carrying a long strand of grass back to her nest. 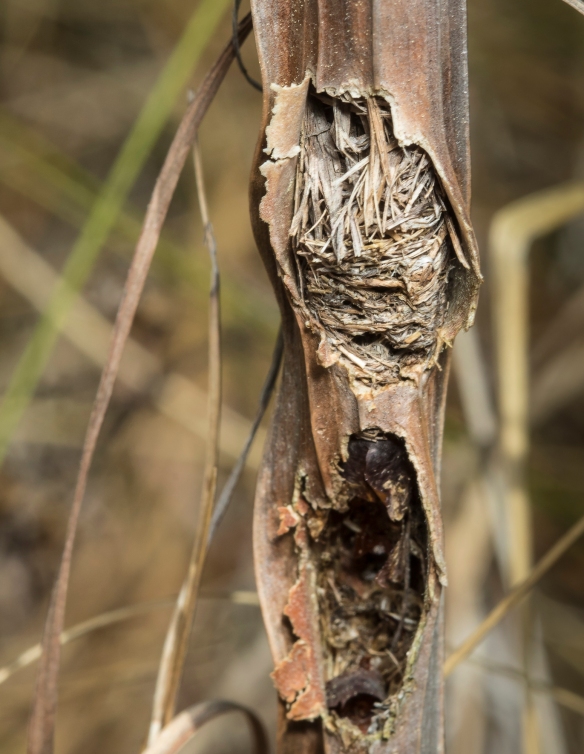 On a recent trip to the Nature Conservancy’s Green Swamp, I found an old yellow pitcher plant tube with a grass plug exposed where the pitcher had split. I gently pulled it out, hoping to find a pupa. 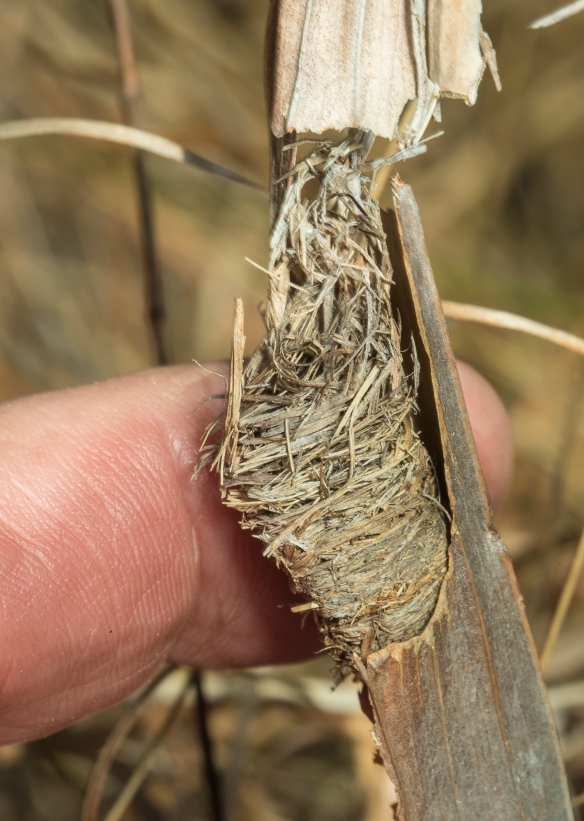 The plug was densely packed into the tube 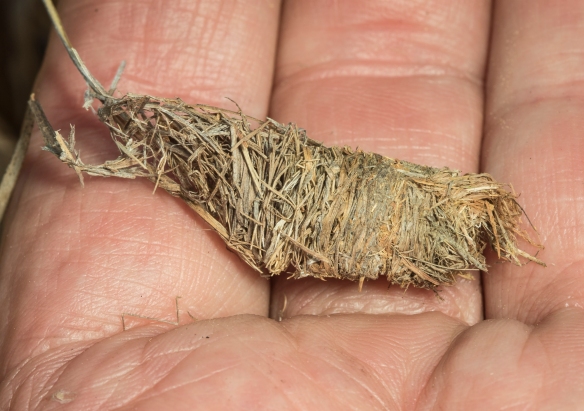 I teased the grass plug apart, but found it empty.

What looks like an old pupal case below the grass plug

Just below the plug, I found what looks like an open pupal case. Perhaps the wasp had already emerged. As I read more about these wasps, I learned that they will create a dense plug of grass in the hollow space as a plug to seal off their nest chamber and protect the developing young. I suppose that is what I found as the tight wad of grass. But, based on the presence of a couple of small flies at my office window last week, it appears that the grass-carrying wasp is itself occasionally parasitized by other species, much like its cousin, the mud dauber. I imagine it happens during the nest construction, with a parasitic fly sneaking in and laying her egg in the chamber while the female wasp is out gathering more grass or her tree cricket prey. 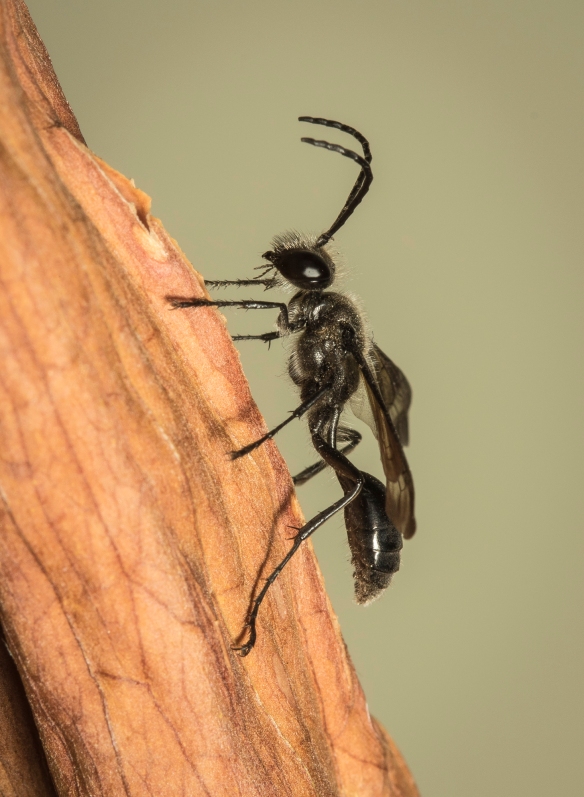 Once again, a closer look at some odd incident has revealed a fascinating story of behavior and interconnections in the invertebrate world just outside my door (and inside my window). Hoping to see and photograph more aspects of this interesting insect thus coming year…stay tuned.