…the repulsive larva, tissue by tissue, is transformed into the superlative beauty of the adult moth. Beauty will come from beauty in disguise.

This was a good year for some unusual caterpillars. For some reason, while looking for larvae a couple of weeks ago, we managed to find several of one of the strangest larval forms to be found in these parts, the Monkey Slug caterpillar, Phobetron pithecium. As if Monkey Slug wasn’t weird enough, this well-disguised creature also goes by the moniker of Hag Moth larva. You can read more about these cryptic critters in a previous post from last year’s BugFest outing.

These guys can be difficult to spot as they tend to look like a piece of dried leaf edge. They are generalist feeders which means you can’t search just a few types of plants for them. It’s more a matter of developing a search image and just plain luck. This year we found them on an elm, a multi-flora rose, and a hickory.

Before returning the larvae to their former haunts, I kept them for a couple of days to observe their behavior. Turns out they fit the family name, Slug Moth caterpillars (Limacodidae), and are quite sluggish in their feeding and movement. Here is a short clip of one feeding when viewed from below.

It reminds me of an odd-shaped, fuzzy mitten trying to gnaw the edge of a leaf. The larva tends to keep its head tucked much of the time.

Monkey Slug from below

These are listed as one of the “stinging” caterpillars with various references saying they have urticating spines hidden in the “hairs” of the lateral processes (wavy arms), and perhaps elsewhere on their body. I wonder if those whitish tufts visible along the sides, when viewed from below, are also clusters of stinging spines?

This individual was fairly active on its host twig and I managed to twist the twig around to watch its locomotion skills. Another short video clip clearly shows why this group has the word slug in its family name.

While somewhat slow, and definitely bizarre, these caterpillars are one of my favorites. Now, I just need to find an adult moth at my moth light next year.

The most beautiful thing we can experience is the mysterious.  It is the source of all true art and science.

There are some creatures that are so bizarre that they leave me baffled as to why they are the way they are. This is one of them.

Even the name is a mystery – Monkey Slug. I suppose if you squint and look at it, you could imagine a very hairy cartoon-like monkey with a few extra arms. One reference said it resembled a terrestrial octopus. That I can see. And the Hag Moth part probably comes from the likeness of the hairy arms to an old witch’s disheveled hair. But, no matter how you look at it, you probably would not guess this strange-looking bug is a caterpillar.

It belongs to the slug caterpillar family, Limacodidae, many of whom are so-called stinging caterpillars, due to the presence of urticating spines. There is disagreement in the references on this species’ stinging ability, with the guru of caterpillars, David Wagner (author of Caterpillars of Eastern North America), stating that he has been unable to get this species to “sting” even by rubbing it on his arm. Others say that people vary in their susceptibility, so I will let it go untested. They certainly look like they could hurt you, with a dense coating of short hairs and long spines, especially in the earlier stages (instars). 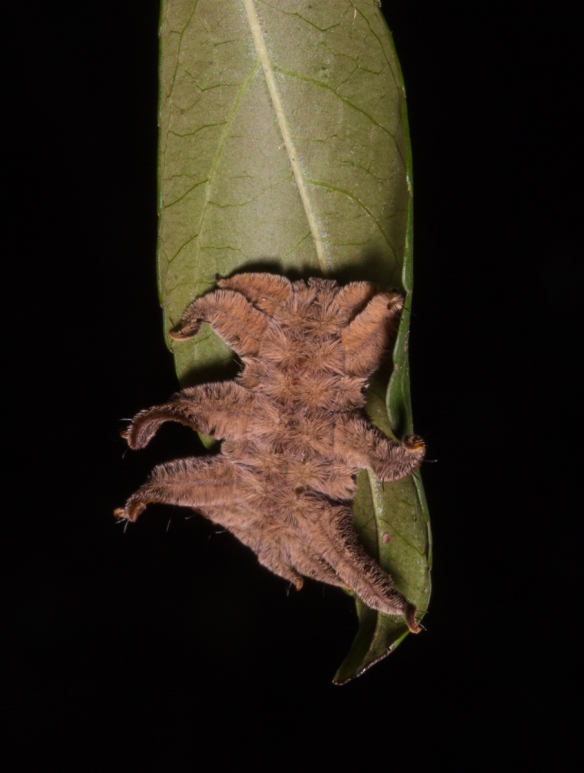 Later instar (perhaps the last) of a Monkey Slug

As they grow and molt, they take on a more carpeted appearance, with short, stiff, brush-like hairs, densely covering their dorsal surface. Monkey Slugs are characterized by six pairs of arms (some short, some long) that are deciduous and can break off without any apparent harm to the critter.

To my eye, a Monkey Slug (especially the last instar) resembles a dead leaf with curled edges. Some researchers have speculated that it looks like a tarantula shed, which also has urticating hairs. Many of our insect eating birds migrate to the tropics and thus might encounter these distasteful objects in the forest, which would then give a tarantula shed mimic some advantage, but who knows. I have never found an adult, but they, too, are mimics – the male looks like a wasp, and the female has the likeness of a bee, complete with faux pollen sacs on her legs. 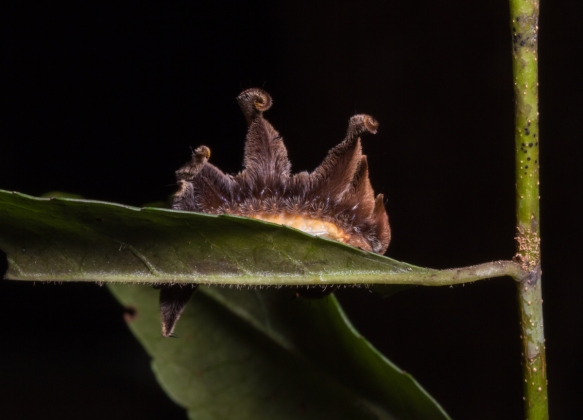 I have only seen a few of these caterpillars over the years, but two of my former colleagues at the Museum each found one and brought them to BugFest last week, where they drew lots of curious looks and questions from the hundreds of visitors wandering by our booth. Monkey Slugs can be found on a wide rage of shrubs and trees but may be relatively scarce, or just darned hard to spot in vegetation.

Monkey Slug gliding along a twig

I’m just glad they found these two and I had a chance to reacquaint myself with one of the more outlandish denizens of our forests. May there always be mysteries…