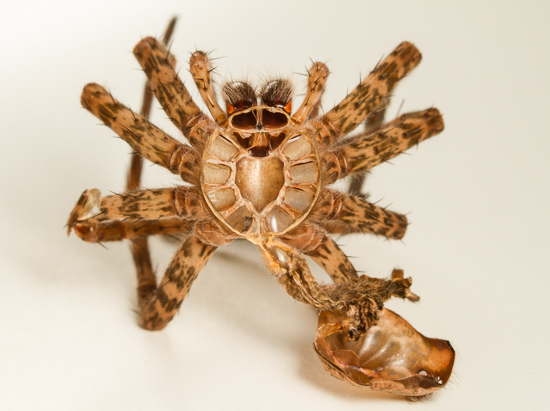 Found a large spider shed in my shed this week. Believe it to be from a Dolomedes species (probably D. tenebrosus). This one would have been close to 3 inches across in total leg span! Their group is known as the Fishing Spiders, but this species is often found far from water, as in this case. They are not web-builders, but hunt large insects and other invertebrates by stalking and pouncing, much like a Wolf Spider (more on those in a future post). Spiders shed by pumping fluid upward which causes the cephalothorax to rupture and pop open like a lid. They then pull themselves out, leaving their old exoskeleton for shed owners to find and ponder.

A close look at the chelicerae makes me appreciate the biting capacity of these large spiders. No wonder they can capture and subdue fairly large insects (I know there are some Wood Roaches and Camel Crickets in the shed). You can see the fangs at the tip of the chelicerae which are used to handle prey and inject venom. On either side of the chelicerae are the pedipalps, which look like short legs. They function as olfactory and sensory organs, and are used to manipulate food. In sexually mature male spiders, they are further modified at the tip to serve as a copulatory organ.