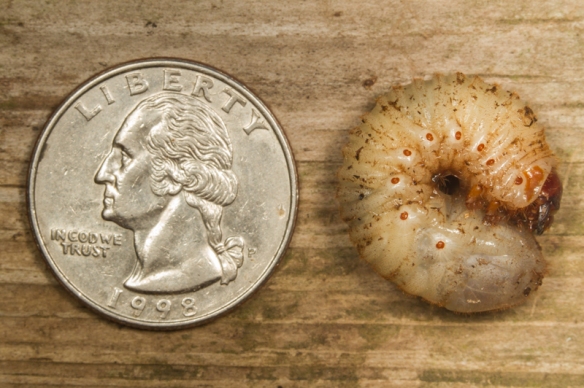 Found this huge grub in the topsoil pile the other day as I was adding soil to some garden beds. When disturbed, it curls itself into a C-shape as do many grubs. But this one then did something that only a very few grubs do – it started crawling away on its back. I first saw this behavior years ago on a museum-sponsored teacher workshop…there were several large grubs at a pullout along the Blue Ridge Parkway that were crawling across the pavement surrounding a grassy area. A closer look revealed they were all crawling on their backs. A quick check in our field guides told us they were Green June Beetle larvae. Green June Beetles (Cotinus nitida) are large (up to 1 inch) beetles colored a beautiful velvety green, often with hints of bronze. I see them flying low over grassy areas and they are frequently encountered when I am picking ripe figs (another common name is Figeater beetle due to their fondness for these fruit). But today, it was the grub that had my attention.

Green June Beetle grub crawling on its back

Green June Beetle grubs are different from most grub species in the Southeast in that they come out of the ground at night and move from one place to another. They also crawl on their backs with their legs in the air. Grubs of some related beetles in the genus Euphoria, or Bumble Flower Beetles, also crawl on their backs, but they are generally less common.
Green June Beetle larvae have stiff abdominal and thoracic bristles, short stubby legs, and wide bodies. When I left this grub alone for a few seconds it started crawling on its back by undulating and using its dorsal bristles and ridges to gain traction. I was impressed at how quickly it moved as it covered several inches in a few seconds. Seems like an odd locomotion strategy but all the references I looked at said the legs are too small to be useful for crawling (especially relative to other species of white grubs).

Green June Beetle grubs overwinter as larvae and may become active on warm nights throughout the winter. Their burrows can be several inches deep (the depth depending on temperature and soil conditions). Their primary food is dead and decaying plant material. They resume feeding once the ground warms in the spring and then pupate in late May or early June. The adults begin emerging a few weeks later. I’ll be on the lookout for the adults in a couple of months and try to learn more about their behavior.

Oh, I almost forgot to mention that I have a long history with grubs of various sorts. My most memorable encounter was in the Amazon years ago, while leading a teacher workshop with the NC Museum of Natural Sciences (where I worked for 24 years as an educator and naturalist). There were two Peruvian teachers with our group and one morning, while bird-watching, one of them got excited when he heard something in a log next to the trail. He ran back to the village and returned with a machete which he expertly used to chop out several very large grubs (as I recall they were well over 3 inches in length, compared to almost two inches for the Green June Beetle grub here). He had heard them chewing in the log and realized what a treat he had found. As any polite person would do, he offered the first bite of one to the three leaders of the group (turns out the grubs were considered delicacies by the locals). Well, being the youngest of the three, I naturally got the tail end of the grub as my share…let’s just say I didn’t chew much. Later that evening the remaining grubs were roasted and served as a great protein snack. I definitely recommend the roasted grubs (which were somewhat nutty in flavor) over the raw ones, both in taste and texture:)

3 thoughts on “Crawling on your back…doing the Grub”