I am back home in NC now after a great two weeks in Yellowstone. I will post a few more blogs about my trip in the coming days but wanted to start with what I witnessed on my last morning through the park. 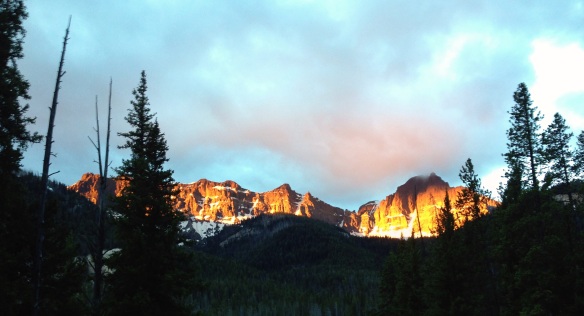 Sunrise on my last morning in the park

The day started with an expletive when I realized at 4:30 a.m. that the power was off in Silver Gate. I had enjoyed my stay at the Log Cabin Cafe cabins but was bummed that I would need to finish packing by headlamp and, worse yet, might have no shower for my long day of plane rides home. But, there was enough hot water to get the shower, and as I got into the car, I was greeted by a spectacular sunrise. It was going to be a great morning after all. 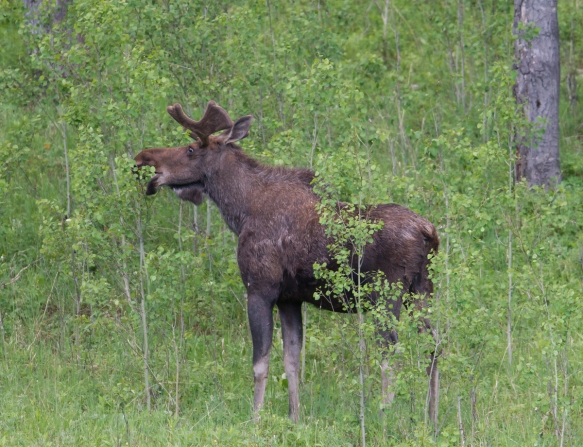 As I approached Round Prairie I could see a car pulled off the road so I slowed and saw a beautiful bull Moose browsing on some aspen saplings. The visitor had been watching the bull feed for about 30 minutes (and it was only 5:30 a.m. when I arrived). I got out and watched for a few minutes as the bull slowly worked its way into some thick tree cover and disappeared from sight. Such are the vagaries of wildlife watching – one minute a great view and the next an animal as large as a horse can vanish for hours by moving only a few feet. Luck was with me this morning.

The clouds thickened as I headed into Lamar Valley. About a mile down the road I could see a gathering of cars on a hill so I stopped to glass the valley to see what was happening. I quickly noticed some ravens and magpies far out across the Lamar River and when I stepped out of the car I heard the alarm barks of a coyote. That probably meant wolves were nearby. After looking near the raven activity I finally saw canids including the unmistakable black color of a wolf. It appeared that the wolves were digging and that was probably bad news for the coyotes. I drove on and found out that the three wolves were digging out a coyote den. As there was no place to pull over I kept driving with plans to check on several things I wanted to see in the area known as Little America before heading for the airport. 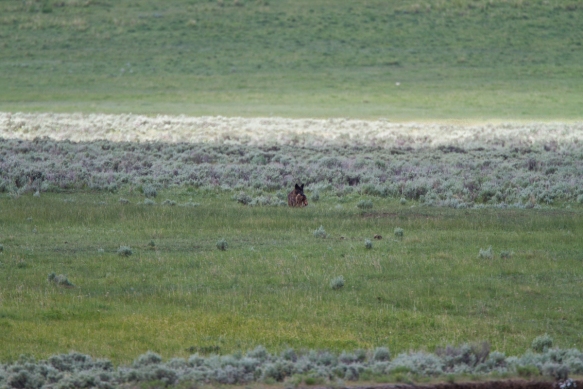 Black wolf out in valley

The dark skies were not great for photography, so, after spending some time watching a bison herd, I decided to drive back to Lamar one last time to check on the wolf-coyote saga. From the highest pullout I could see a black wolf a mile or more away headed down the valley. A half mile beyond me were about 50 people out watching. I drove beyond the crowd hoping the wolf would continue down the valley toward the den site a couple of miles beyond. When I stopped I could see the wolf was carrying something – a coyote pup. I later found out that this black wolf is a two year old female and is a persistent animal – she did the bulk of the digging at the coyote den (for over 45 minutes) while the other two wolves stood guard. She killed this pup and was carrying it back toward the wolf den with pups a few miles away. 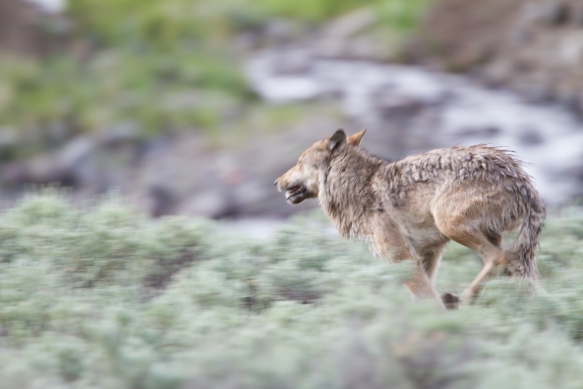 Wolf running by me as I wait for black wolf

I, along with two other people, had positioned myself down the road ahead of the crowd in an area where I anticipated the black wolf heading. While I was setting up my camera, I saw a blur out of the corner of my eye – it was a wolf running full speed between me and the river! The black wolf was far across the river so we were all startled by this close animal – and this wolf was being pursued by two coyotes. 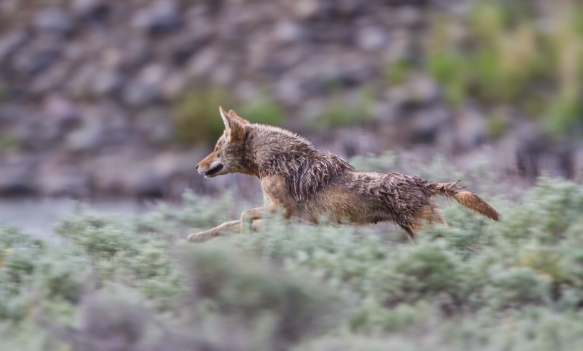 I quickly spun the camera and fired a few shots and managed to capture a couple of somewhat blurry images before they were all out of sight. The three of us looked at each other and appeared stunned at what had just happened. I am guessing this wolf was being chased by the coyote pair that had just lost their den in a somewhat unusual turnabout of roles with the coyotes being the pursuers instead of the pursued. The images here of the other wolves are heavily cropped – these of the running wolf and coyote are not cropped at all, showing how close they were. Apparently the wolf had crossed the river far downstream beyond our view and was being chased along our side of the river when she blew by us. 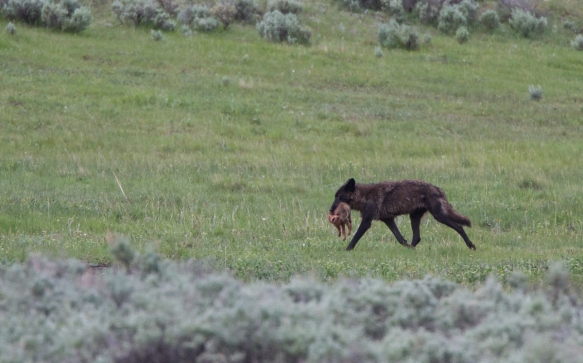 After catching my breath I turned my attention back to the black wolf who was approaching on the far side of the river carrying her prey. She moved quickly down the valley and then dropped the pup, looked back, and began wagging her tail. 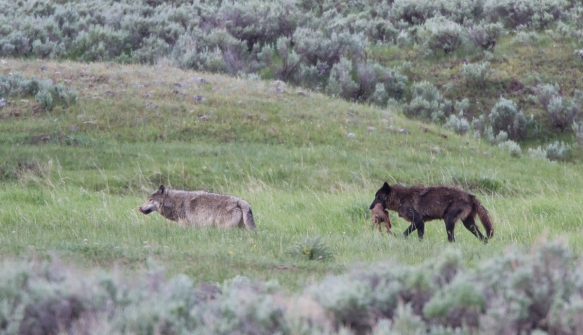 I looked up from the viewfinder and saw a big gray wolf approaching ( I think this is the male of the group). After a brief greeting, the black wolf picked the pup up again and they moved on down the valley. The male turned and headed over a knoll and the black female continued on toward the river in the direction of the den. 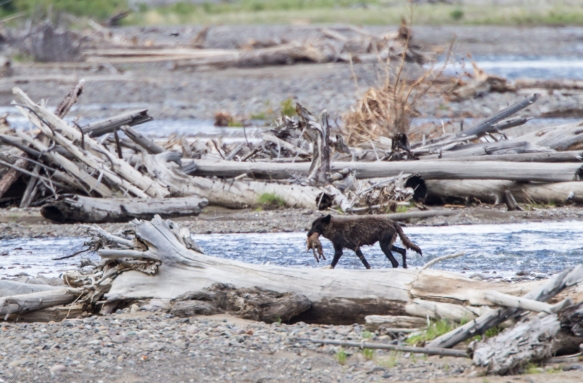 Black wolf with Coyote pup getting ready to cross river

From my vantage point I saw the wolf approach the river and come out on the other side. By this time, many of the cars from down the valley had come down to try to see the wolf so there were people and cars on both sides of one of the mile-long no stopping zones that the park created along the road to allow the wolves to safely travel to and from their den site. When the black wolf finally crossed it did not have the pup carcass. I imagine it  cached it somewhere amongst the willow flats along the river to be retrieved at a later time. I saw this same pack do that earlier in the week with a Pronghorn fawn they killed – the gray female carried the fawn’s body several hundred yards and buried it in an aspen grove.

Such is the cycle of life in Yellowstone. I heard people commenting on what we all just witnessed – most felt some sorrow for the coyote pup but were still thrilled at what we saw. This is part of the drama that is played out every day in this incredible place and awaits you if you simply take the time to observe. It is hard to put into words how it makes you feel – a mix of emotions and awe. But the drama of nature happens all around us every day if we only stop and look. As I am writing this, there is a Gray Squirrel out my window, perched precariously on a thin branch and reaching up and grabbing some Viburnum berries to eat. Granted, it is not a wolf with prey, but it is special nonetheless. One thing I have noticed over the years is that trips to places like Yellowstone, where we can more easily witness the behavior of wild creatures, helps us to better observe and appreciate the small wonders of nature back home. And that may be the most important lesson we can learn from this magical place.