Badger – to bother, harass, or annoy…persistently; on and on; without stop; relentlessly; over and over; endlessly.

Wonder where that verb comes from? Whatever its origin, this is the summer of the Badger in Yellowstone. The animal, that is…a persistent, relentless digger that roams the sagebrush flats in search of prey. This year I saw the most American Badgers I have ever seen in my 25+ years of visiting the park. They live in habitats similar to this in the area called Little America in Yellowstone’s northern range,. 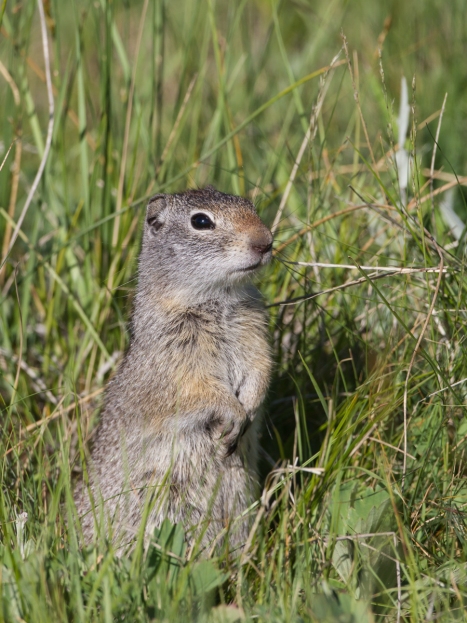 The usual prey here is the omnipresent Uinta Ground Squirrel, itself a proficient burrower. Last year our teacher workshop encountered a Badger in this same area so I brought my group there this year in hopes of seeing another. As we approached, I spotted an adult Badger waddling across the trail carrying a ground squirrel. 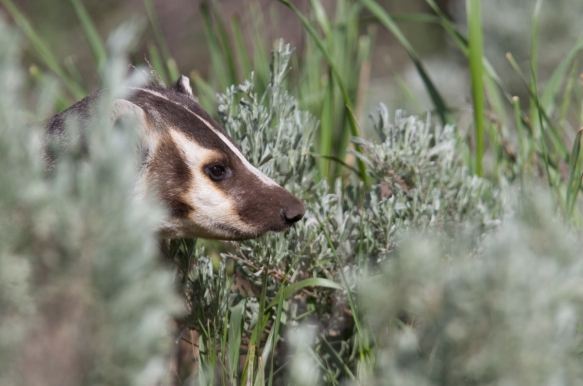 It quickly vanished in a large hole at the base of a boulder, only to reappear a few seconds later to peer through the sagebrush at us. It disappeared back into the burrow, only to come out again and move to another hole nearby.

There it quickly began throwing dirt as it dug and soon disappeared into that hole. Badgers are well adapted to their digging life style: they have nicitating membranes on their eyes to protect them from dirt and debris; they have small ear canals; their body is flattened and their neck muscular, which helps in the digging process; they have long, sharp claws and their toes are partially webbed; and the loose skin may help them turn in tight tunnels. And burrow they do – they rarely use the same burrow for sleeping or resting more than a few times (except for burrows with young) and they are constantly digging for prey so a single Badger is estimated to dig well over a thousand burrows in a year.

And for some reason, Badgers are super abundant this year in Yellowstone, including a well-photographed den near the road in Little America. The female must have moved her young into that den after I arrived because the second time I went through the area ( a week after the first) the park had placed signs and cones along the road to help keep people a reasonable distance from the den. And every day for the next several there was a “badger jam” at that site with lots of long lenses waiting for some action.

Badger adult and young at den along road

I joined in the jam for a few minutes to snap some shots and let my group do the same, and then we moved on, as I prefer to be away from the crowds to watch wildlife whenever possible.

Badgers have been widely watched this spring in the park with two well known incidents happening in front of visitors. In two dramatic cases, a Badger had raided a den site and fought, evicted, and killed the young of a Coyote and of a Red Fox. I had seen images of one incident on a web site I follow and wolf watchers told me about the the other they had witnessed at a Coyote den in Lamar Valley. Coyotes are supposedly one of the major predators on Badgers, especially the young, but here was a case of the reverse. And Badger numbers may be up, in part at least, due to the decline of Coyotes on the northern range after the reintroduction of wolves.

I returned to the secluded Badger burrow we had found earlier only to find no badger so I waited. I finally walked away from the hole a hundred feet or so just checking the area when I spotted the familiar black and white pattern of a Badger face in the sagebrush. The Badger had apparently moved the young to another burrow near the original one. This time I was able to get quick shots of both an adult and a young gazing out at their world through the vegetation. 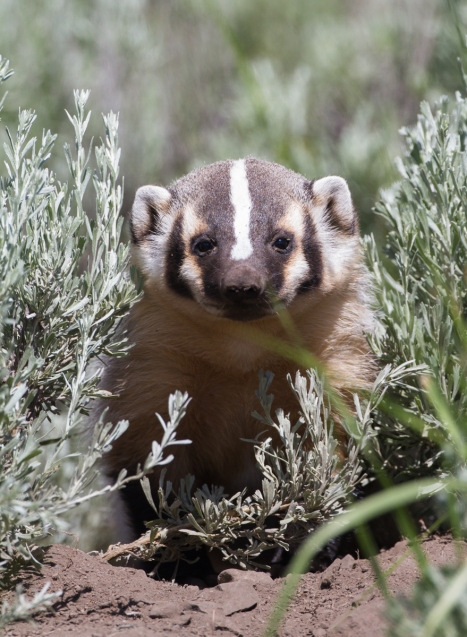 Their is a certain satisfaction in observing wildlife with no one else or just your group around. I visited this “private” badger group a couple of times and was rewarded with a close encounter with this family of weasel relatives as they shuffled around their den site, grunting ad snorting as they went about their daily lives. I enjoy this type of wildlife encounter the most – one where you really get the feel of an animal as it behaves the way it normally does without interference from crowds of people. On your next wildlife watching outing, I hope you are as fortunate.

1 thought on “A Bevy of Badgers”