I do not understand how anyone can live without some small place of enchantment to turn to.

For me, that place of enchantment in my home state is Pocosin Lakes National Wildlife Refuge…more specifically, the Pungo Unit of that refuge. I had a trip this past week with a couple of friends and it never fails to deliver. It is not always the same thing, but it is a wild enough area that there is always something to provide a memorable moment. It was a day trip, leaving Raleigh at 7 a.m. That makes for a long day, especially when you start by going to my other favorite wildlife spot, Mattamuskeet National Wildlife Refuge.

Lake Mattamuskeet is the largest natural lake in North Carolina and attracts thousands of waterfowl in the winter. But most of those birds are hidden from view, spending much of their time in the east end of the lake or in impoundments that are closed to the public. However, a drive along Wildlife Drive will allow you glimpses of that wildlife richness. There are a couple of small pools near the gate that reliably produce good bird sightings (although the invasive plant, Phragmites, is beginning to block much of the view in this area). One species you are likely to see there is the Black-crowned Night Heron. This trip provided a good view of an immature bird, while the nearby adult was hidden in thick vegetation.

Great Blue Heron gets a drink

There is almost always a sentinel of the marsh, a Great Blue Heron, present in this area when you first drive in. Unlike Great Blues in many other areas, these are fairly tolerant of our presence and thus are probably amongst the most photographed of their species in North Carolina. 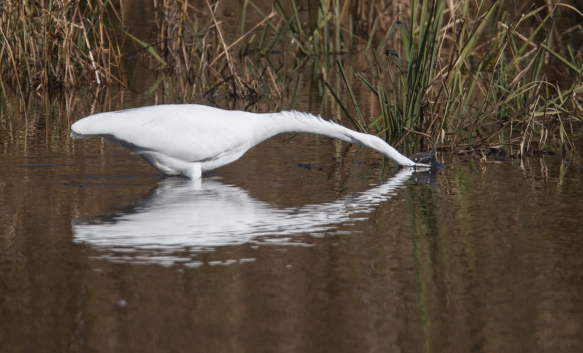 Another almost sure bet near the entrance is a Great Egret. These elegant white birds forage throughout the area, most often taking small fish, with the occasional larger specimen caught for the luckier viewers. I have hundreds of images of these marsh stalkers from this location over the years, but I can’t seem to resist trying to get a few more on each trip. I particularly enjoy trying to capture the moment of the strike – their white head splashing in the water as they snag a meal.

Another reliable species near the entrance is the diminuitive Pied-billed Grebe (PBG for short). These chunky little divers scoot about the pools, diving for fish, and generally going less appreciated than the long-legged marsh dwellers. But, I like these little guys, and they often swim close enough to shore to allow a nice reflection shot when waters are calm. 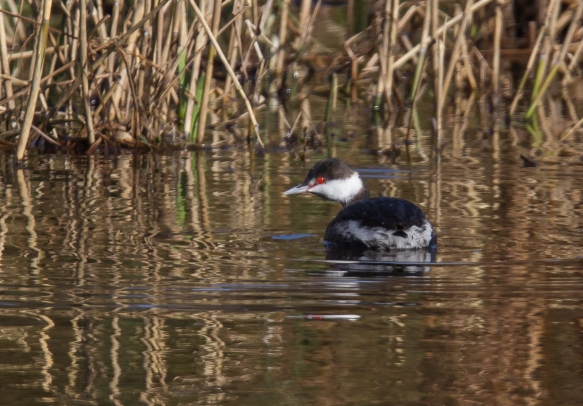 A surprise sighting in the pools this trip was a Horned Grebe. I have seen them out on the lake in some winters, but never in one of the canal areas where you can appreciate their winter plumage and bright red eyes. 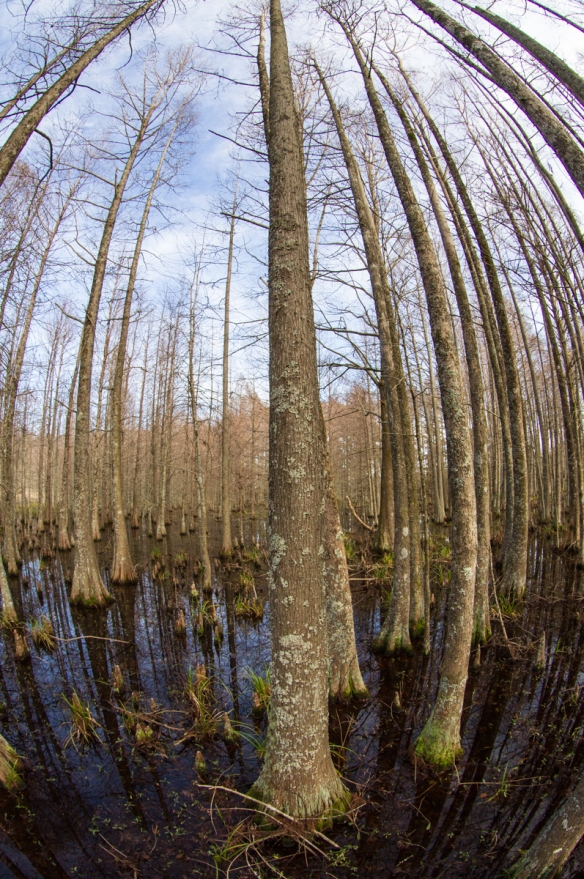 One of my favorite stops at Mattamuskeet is the short boardwalk through a cypress swamp just off Wildlife Drive. I borrowed my friend’s fish eye lens for some unusual perspectives and then learned of a simple trick with my iPhone that produces some interesting results as well.

I have used the pano feature on my phone’s camera many times in this area, but never vertically. Simply turn the camera sideways in pano mode and start overhead and bring it down. By starting overhead, you get the proper exposure for the sky. You can then lighten the darker areas near the base of the image with some shadow reduction features in post processing. Not nearly as nice or sharp as the fish eye, but it doesn’t require the outlay of thousands of dollars that the high quality lens does.

As the afternoon shadows lengthened, we drove over to the Pungo Unit of Pocosin Lakes for the sunset show. Tundra Swans were flying to and from the lake, providing some beautiful views in the afternoon light. But what I wanted was the return of the Snow Geese to the fields or lake itself. The large flocks have been leaving the refuge in the morning, apparently feeding in fields far to the east. I was hoping they would fly back into some of the refuge fields before heading into the lake to roost for the night.

We positioned ourselves near one of the fields containing several hundred swans and enough bear tracks along the road to make you think you would certainly see a bruin as it came out to feed.  Finally, I spotted them – several thousand Snow Geese flying in from the east in undulating waves of wings. They began to circle and land, joining the hundreds of Tundra Swans already in the field. Right at sunset, a Black Bear came out and wandered over, setting the flock into the air where they circled a few times before heading out to the lake to spend the night. Refuge magic at its best.

I will be leading trips to this area for the next several weeks to observe the wintering waterfowl and other wildlife. Most weekends in January are already booked, but I have many week days left as well as some single weekend dates. I’ll also soon be posting details on my blog Trips page for my June trips to Yellowstone and my July trip to Trinidad and Tobago (the latter in conjunction with EcoQuest Travel and the NC Zoo Society). If you are looking for that last gift for someone special (or yourself), consider giving the gift of nature – a field experience with the Roads End Naturalist. Contact me at my email address – roadsendnaturalist@gmail.com – for more information, rates, and availability.