If we can somehow retain places where we can always sense the mystery of the unknown, our lives will be richer.

Wildlife refuges, parks, open spaces – these are the special places I love. And we are lucky here in North Carolina to have an incredible variety of public lands to enjoy. Last week, I took a few days to do a quick tour of some of my favorite places – five national wildlife refuges (Pocosin Lakes, Mattamuskeet, Alligator River, Currituck, and Pea Island), and a national seashore, Bodie Island at Cape Hatteras National Seashore).

A light fog hung over the fields at the Pungo Unit of Pocosin Lakes NWR at sunrise and soon, they could be heard coming from the lake – Snow Geese. Not the tens of thousands I had hoped for, but still enough to delight the eyes and ears.

The flock probably numbered a couple of thousand. They did the usual Snow Goose act of noisily settling into a field, moving as a large white mass feeding in the field, and then erupting into the sky with a loud roar – then repeat – and repeat. One blast off was triggered by a Bald Eagle flyover, but I have no idea what caused the other take-offs. While I don’t understand why they behave this erratically (or how it isn’t a total drain on their energy reserves), I never tire of seeing and hearing it.

A Merlin sitting on a bird-friendly sign on the beach

The next morning I took my inaugural drive on the beach in my new 4wd Honda up at Corolla. I had never been to this part of the Outer Banks, and I was amazed at the super highway out on the beach. But, there was also a welcome bird sighting – a Merlin, appropriately sitting on a refuge sign along the dunes at Currituck NWR. Merlins are slightly larger and generally darker in plumage than our smallest falcon, the American Kestrel. They are voracious predators on various species of small birds, but this one was quietly surveying the scene as cars and trucks whizzed by on the beach. 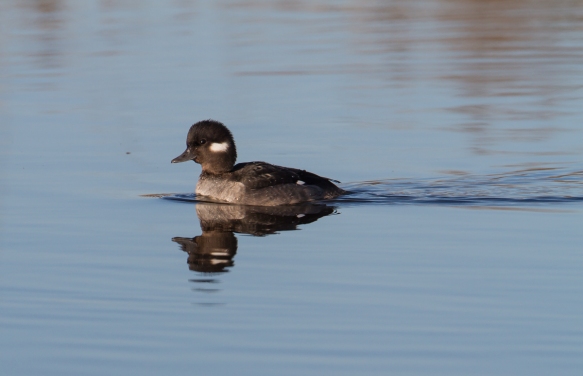 That afternoon included stops at two other waterfowl hot spots. There were plenty of birds at Pea Island, but most were far out on North or South Ponds. A walk along the trail did produce some nice views of two species – a few Buffleheads and a group of Ruddy Ducks. Ruddy Ducks always seem to have a startled look when swimming, their stiff tail feathers held up at an angle. 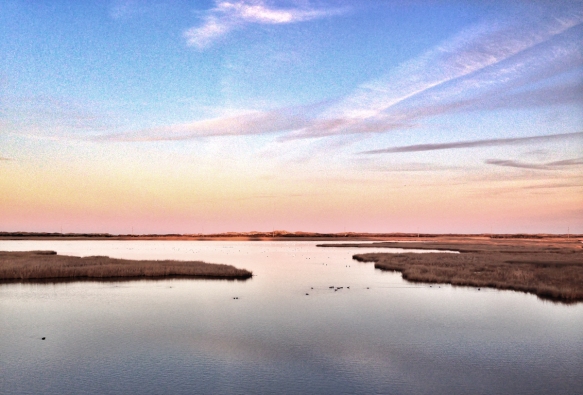 As the afternoon light started getting that golden glow, I walked out onto the observation platform at Bodie Island. Ducks were calling and flying – a quintessential coastal Carolina December scene.

Several Northern Pintails and a few Tundra Swans were feeding in the shallow water near the observation platform, dabbling on submerged aquatic vegetation, with their rear ends up in the air.

A few American Avocets were scattered across the pond, picking at some unseen morsels in the water. I always enjoy seeing these elegant shorebirds with their unusual upturned stiletto bills.

The fading light bathed a pair of Tundra Swans near the platform in rich golden hues as the adult bird preened itself one last time before sunset. Immature (first year) swans have grayish heads and necks and are usually seen accompanying their parents and siblings on the wintering grounds.

The trip, while brief, turned out to be memorable – beautiful scenes, abundant and diverse wildlife, peaceful soundscapes, and the vast sky characteristic of eastern North Carolina. As the year winds down, I want to wish everyone a happy holiday season and a joyous new year. I hope you are all able to spend more time outside this coming year.

Wild parks are places of recreation…

Where all may gain inspiration and strength…