This past weekend was beautiful…cold, but beautiful. I had planned a trip south for some bird photography, but came down with a lousy cold, so I decided to stay home. At least I could gaze out the windows at the awakening landscape. Spring is pouring over the woods here in central North Carolina and everywhere I look there are changes. 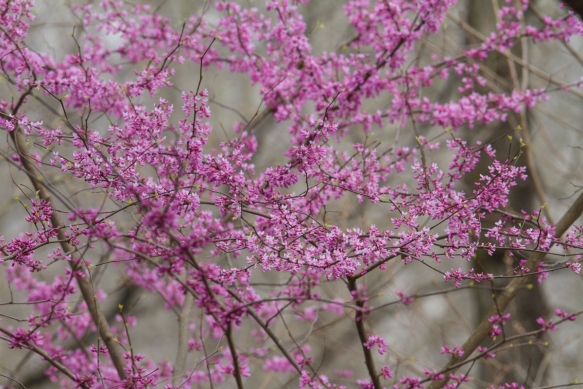 One of the most noticeable this past week is the reddish-pink blush of the Redbud trees in bloom in the understory. The warm days late last week seemed to have encouraged the flowers and I couldn’t help but notice the buzzing of so many bees and other insects visiting these early blooming trees when I went out on the deck a few days ago. 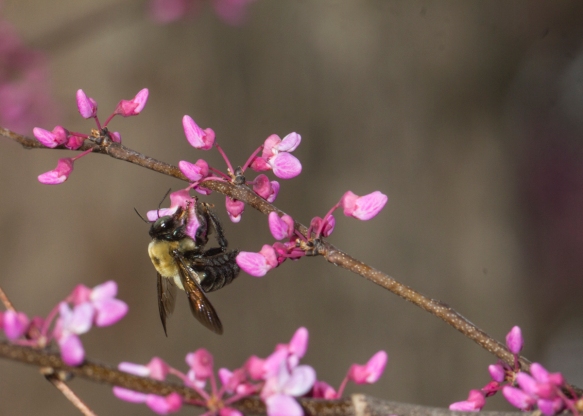 Redbud flowers are amongst the earliest abundant sources of nectar and pollen in these woods and are therefore a critically important part of the landscape. But, with temperatures dropping into the mid-20’s over the weekend, the insects were silenced. They were replaced by a variety of birds visiting the branches of this tree as they waited their turn at one of the feeders hanging off the deck. After watching all this activity, I couldn’t help but do what any nature nerd with a camera so often does – I grabbed the telephoto lens and sat at the screen door to the deck under my Kwik-camo blind to try to get some portraits of the birds amongst the flowers (isn’t that what most of you do when nursing a spring-time cold?). So, over a period of two days, I sat out for a total of a couple of hours, watching the parade of birds. It dawned on me that I was witnessing a transition of seasons – the juxtaposition of several of our winter bird species with the arrival of our woodland spring. In a week or two, over half of the bird species I saw this weekend will be gone, migrating north, some as far as the boreal forests of Canada, to begin their breeding season. But for now, they all looked pretty in pink, surrounded buy a sure-fire indicator of change in their winter home, the blooming of the Redbud trees. Here are a few of their portraits… 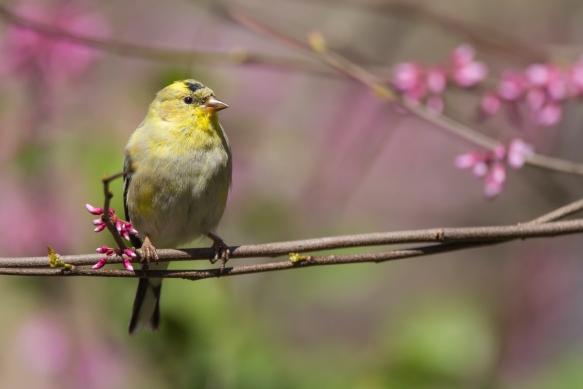 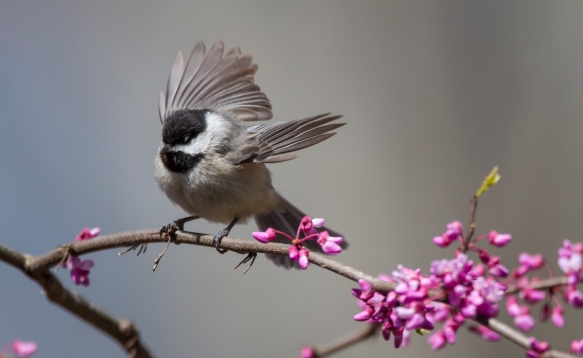 Carolina Chickadee landing on a twig (resident species, and already starting to nest in nest boxes in the yard) 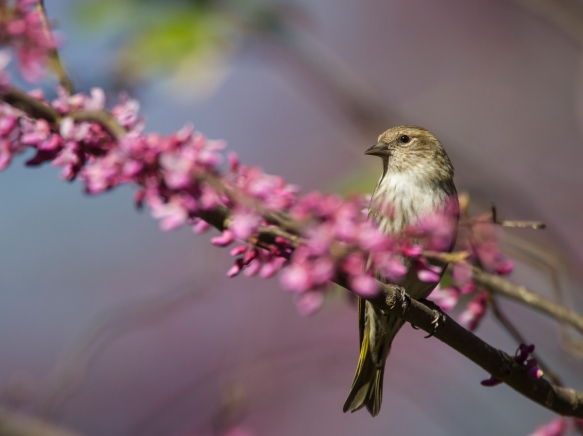 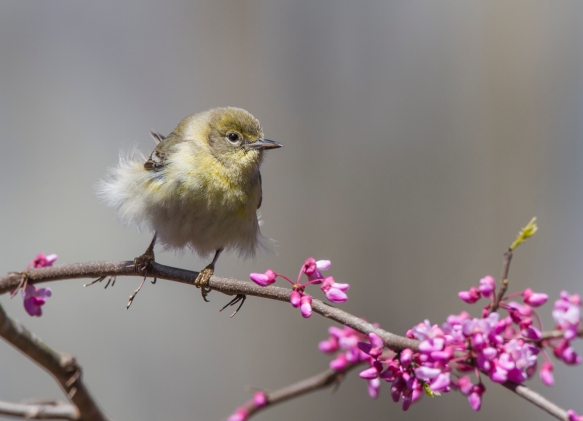 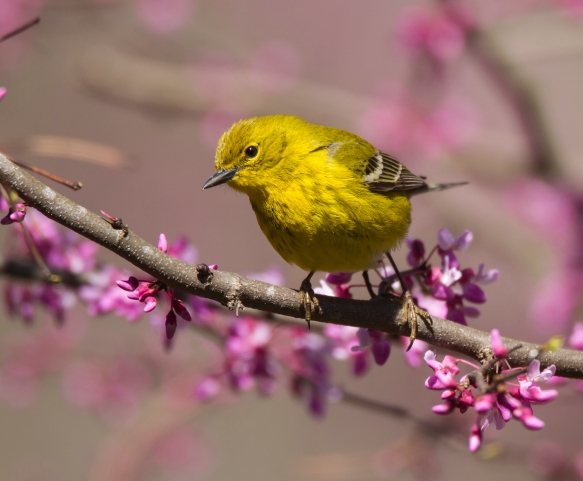 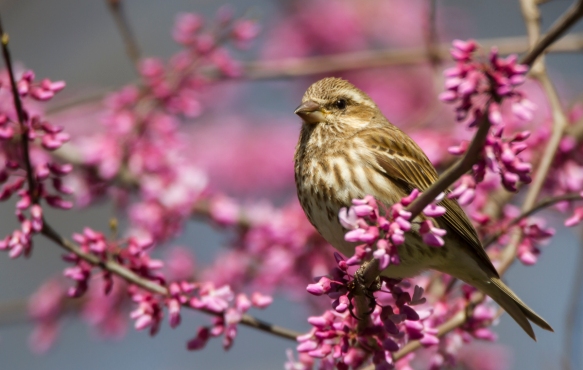 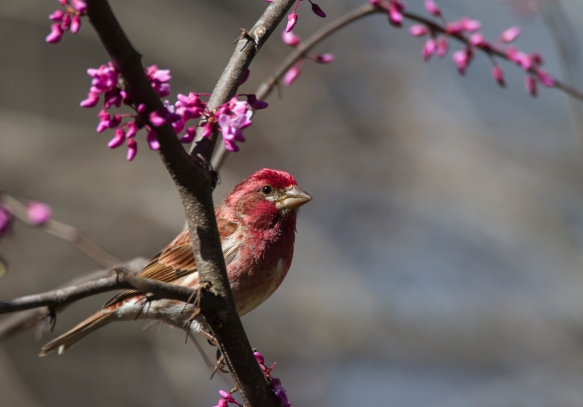 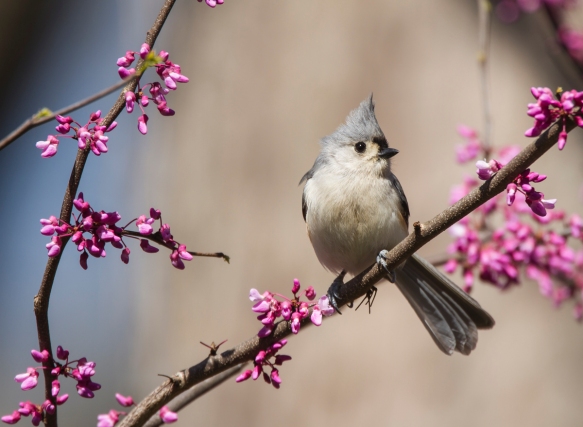 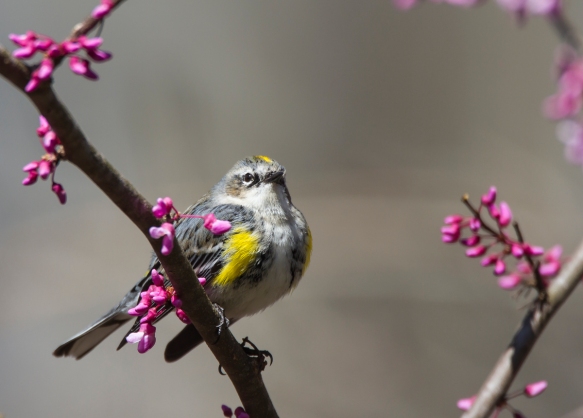 As so often happens when sitting quietly in a blind, I saw many things happen that I did not capture with the camera. The highlight occurred while I was pulling off the camouflage drape to head in for the afternoon – a Cooper’s Hawk flashed onto the scene, scattering all the other birds. I froze, waiting to see what it might do. It eyed me suspiciously and then flew into another Redbud tree that I could see through the screens of the porch. After a minute or two of surveying the now-empty landscape, the hawk swooped off through the trees. A remarkable scene, even if it isn’t recorded on anything but my brain.

6 thoughts on “Pretty in Pink”