Frogs are the birds of the night.

I think I may have used this quote before, but it is just perfect for my experience last night. It just so happens, I do like college basketball, but when I discovered I would not be able to watch the UNC game on TV (my local station aired Notre Dame and Wichita State instead), I decided to head outside for a little quiet time by the frog pond. A few days ago I posted a single image of a Spring Peeper from earlier in the week, but I was hoping the warm night would bring about more activity. I walked out to the stone bench and sat, waiting for the action to begin. And I waited some more. Seems like my peeps (finally, a good use for that term) were not in the mood. There was an occasional squeak, but nothing worthy of such a warm and humid night. I remembered another of Thoreau’s thoughts…The naturalist accomplishes a great deal by patience, more perhaps than by activity. He must take his position, and then wait and watch. And so I did. I noticed there were a lot of Green Frogs around the pond edge and out in the wildflowers. Perhaps that was deterring the much smaller peepers from expressing their lustiness.

At last, a mini chorus erupted. I scanned around with my light, looking for the sources. I spotted one calling from a thick clump of emerging Phlox leaves…too dense for a photograph. I walked around the edge of the bed, looking in the shrubs. There was another minstrel, again partially hidden by branches. Then I saw one that was more out in the open. 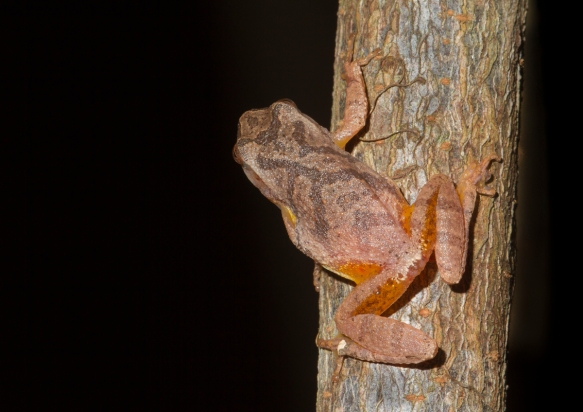 He was perched about three feet off the ground, clinging to the side of a Viburnum trunk. I say he because only the male Spring Peepers call. The high-pitched peep is an advertisement call to attract a mate and a territorial call to dissuade rival males from claiming a preferred spot near a breeding pool. Males also give a so-called aggression call which is more of a trill. This is supposedly given to persuade another male that is close to leave the area. It also may be a precursor to physical interaction between two males.

I slowly moved over and took a quick photograph, then sat and waited. After several minutes, the first one I had spotted starting peeping, then another, then my guy. He had moved to a better side angle and I turned on my lights to capture a little video. That silenced him for a second, but he could not resist the urge as the others kept calling.

It only lasted a few seconds, and then, they all fell silent. I watched them call again off and on for several minutes. When they are really cranking, peepers can call more than once per second and a single male has been known to call 4,500 times in a one night. After watching how my frog’s sides heaved with each call, I realized it must be exhausting to do that all night long. It certainly seems energetically costly, and I would assume dangerous, in terms of announcing your presence to potential predators. But, presumably, the male that calls the loudest and most frequently is the one that is most fit, and, therefore, most attractive to any nearby female.

During the chorus I had spotted another frog on a nearby bush in a great location for an image. I walked over, got everything set up, turned on the lights and waited. This guy was posed with his vocal sac partially inflated, and looking a little worn out. I sat for another thirty minutes with this little fella, and even though his competitors chimed in on many occasions during that time, he sat silent. Too pooped to peep, or just weary from being wary? I’ll never know as I finally decided to call it a night and headed in. This morning, it is raining hard outside, but the temperature is dropping. I’m afraid the cold weather will put a damper on the ribbit romance for a few days. I’ll check back on the status of the amphibian liaisons next week when warm temperatures return. I wonder how that basketball game turned out…