Faith is the bird that feels the light and sings when the dawn is still dark.

One of the things I love about early mornings here in the woods is the sound of sunrise. Much of the usual background noise of distant traffic and barking dogs has not yet started, so what you hear is the music of the awakening woods, the forest starting a new day. And this time of year the sounds are many, especially the so-called dawn chorus of birds. This chorus is most pronounced in spring and is believed to be related to male songbirds defending territories and finding a mate. Other recent research has suggested that these intense bouts of song may help male birds exchange information about their social standing. Another discussion speculated that birds sing more in the morning because that is the most likely time of the day when they have some spare energy (saved up overnight from the previous days’ feeding) to dedicate to belting out a lot of song. Whatever the cause, it gives me one more reason to appreciate getting up early. Here is a brief sampler from Sunday morning’s dawn chorus.

The dominant song in this clip is that of the melodious Wood Thrush. Henry David Thoreau said of this bird’s music… It lifts and exhilarates me. It is inspiring. It changes all hours to an eternal morning. It is certainly one of my favorite woodland sounds as well, so clear and flute-like. After listening to the chorus for several mornings, I think something must have happened this past Sunday to concentrate these songsters in the trees around here. They seemed to be singing from every direction and I observed several down in the yard feeding as they flipped over leaves looking for worms or other invertebrate treats. I even saw a pair in a squabble as they flapped in a ball of brown and white feathers through the greenery for a few seconds. I finally grabbed the camera and went out in the dim light to see if I could capture something. 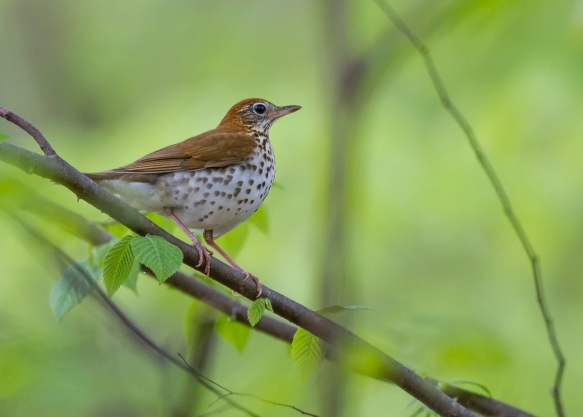 After watching for several minutes, one Wood Thrush came down from the higher branches and grabbed a few morsels from the leaf litter. It then flew up to a small sapling, flitted its wings and bounced while looking around for a few seconds, and then returned to a high limb overhead. I’ll be content with that one image for a day or two, but would love to capture one singing. This morning’s chorus seems to have extended beyond the usual time they sing (things have calmed down by about 7:30 a.m. or so on most recent mornings). I wonder if cloudy weather influences the duration? So many questions, so little time. I look forward to hearing the new arrivals join in the chorus these next few weeks (my first Summer Tanager was Sunday, the first Hooded Warbler was this morning). I also hope you have an opportunity to appreciate the magic of the dawn chorus in some woodlands near you. By the way, I discovered that there is even an International Dawn Chorus Day (this year on May 3). It is primarily observed in the United Kingdom….but, hey, why not get out and celebrate it by listening to the sounds of sunrise near you.