You need to let the little things that would ordinarily bore you suddenly thrill you.

Walking out the door yesterday, I looked down and saw a speck of gold. Funny thing was, it was on the back of an odd-looking fly. I stooped to take a closer look, fully expecting it to disappear, but it stayed put. Yep, a fly, with a hairy, gold back….odd indeed. 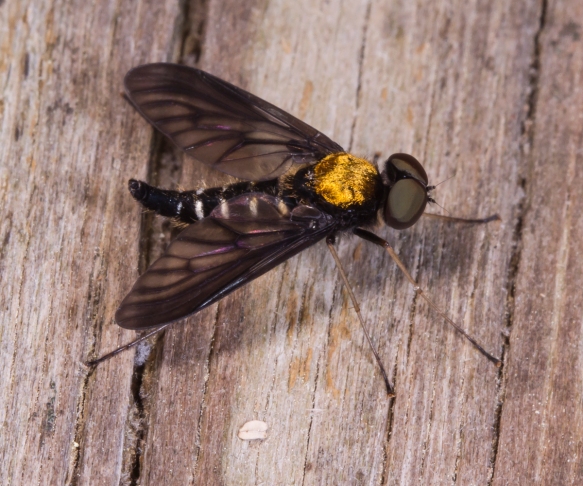 A speck of gold on the walkway (click photos to enlarge)

I grabbed a few photos and then went inside to see if I could identify this rather distinctive insect. My usual go-to source for insect identification is the web site, BugGuide. But since there are perhaps 20,000 species of flies in North America, searching that site might take some time, so I thought I would try one of my favorite field guides first, the Kaufman Field Guide to Insects of North America. I hoped the unique appearance of this little guy would make it easy to find in the merely 45 pages devoted to true flies. 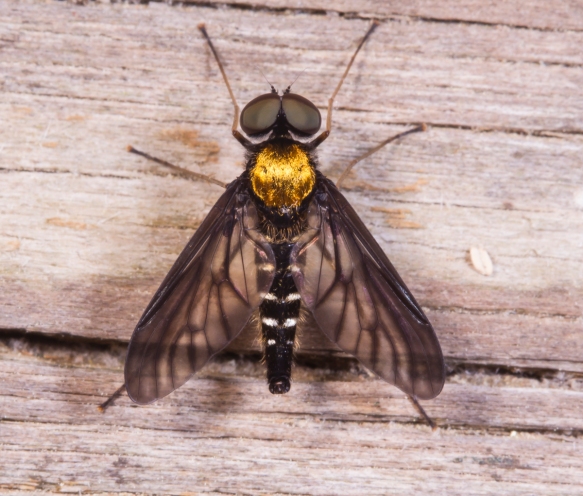 Sure enough, after flipping through a few pages I came across my gold speck – the aptly-named Golden Backed Snipe Fly, Chrysopilus thoracicus. Well, at least the first half of the name is appropriate (I am still not sure where the snipe portion of the name comes from). Turns out these flies are fairly common in spring in eastern forests, but not much is known about their life history. Other members of this family of flies (Snipe Flies, Rhagionidae) are known to be predators of other insects as both adults and larvae. Larvae live in moist soil or rotting wood. Adults of a few western species may bite humans, but not this one. The fuzzy gold patch, the striped abdomen, and the overall shape of this fly combine to make it one of the bee and wasp mimics. Many species of insects, especially flies, supposedly gain some degree of protection by looking like stinging insects. But this half-inch little jewel is harmless.

One thing I did learn about my gilded guest is that it is a male fly. Females are more robust than males and have eyes that are farther apart. The eyes of males of this species touch each other. So there you have it…a male bee mimic that we really don’t know much about. But it was the first thing I saw walking out the door yesterday, and it helped make it a special day. You have to appreciate the small wonders…

5 thoughts on “A Speck of Gold”