What we see is mainly what we look for.

One morning when I walked out the front door I noticed a surprise visitor clinging to the edge of the tadpole-rearing container I have on the porch.

It was an adult Spring Peeper, Pseudacris crucifer. As I reported on earlier this year, Spring Peepers were common out front and were calling almost every night. But once we get into late spring, they stop calling and seem to vanish. So, seeing one in the heat of summer is a treat.

Characteristic dark cross on the back of a Spring Peeper

The species name, crucifer, is Latin for cross bearing, and refers to the dark X-like marking typically found on the dorsal surface of most peepers. This one was probably a female as it was about 1.5 inches in total length (males are smaller, usually less than an inch). 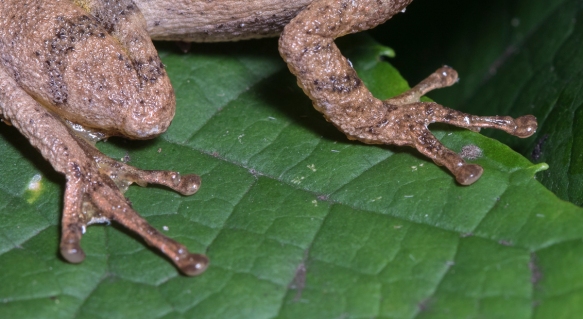 The frog quickly moved from the edge of the plastic container (containing a few Cope’s Gray Treefrog tadpoles I am observing) and jumped into a nearby shrub. I looked closely at those feet and legs, capable of propelling this little frog such a considerable distance, and allowing it to grab any leaf, twig, or even vertical surface it lands on. At the tip of each digit are the round toe pads characteristic of treefrogs. The peepers’ legs don’t look much different to me than most other frogs, but it seems able to jump quite a distance given its small size. So, I started searching online and in my references and found an interesting tidbit reported by a famous Smithsonian herpetologist, A. Stanley Rand, in 1952. He observed the relative jumping abilities of six species of adult frogs and toads and found that Spring Peepers jumped an average of 17.5 inches per jump under his study conditions. This represented an impressive relative jumping distance (distance jumped/body length) of 17.9. This was good enough for second place in the competition. Species falling behind the Spring Peeper in the study were Fowler’s Toads, Bullfrogs, Green Frogs, and Northern Leopard Frogs. The clear winner was the Northern Cricket Frog, another small frog with an average jumping distance of 33.75 inches and a relative jumping distance of 36.2. 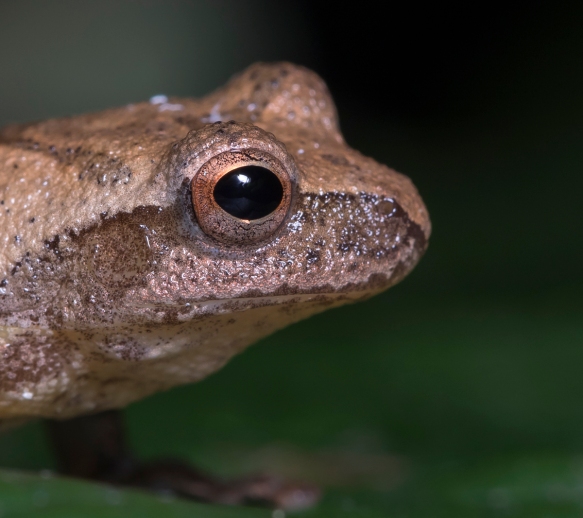 Determination can be seen in the eye of the peeper

Looking into the peeper’s eyes, I can’t help but wonder if it is pondering this second place finish, and thinking of ways to even the score.