The best thing one can do when it is raining is to let it rain.

Unlike most years, I was dreading this year’s annual Christmas Bird Count. The weather forecast had been calling for more rain, 80% most of the day. We have already had so much rain and I anticipated the roads at Pungo would be nasty. And to make matters worse, it was forecast to be incredibly warm, way too warm for a Christmas Bird Count…almost 75 degrees! But, I suppose there is no such thing as a bad day at Pungo, so off we went. We arrived at the platform about 6:30 a.m. to a very gray landscape. The swans were scattered across the surface of Pungo Lake and were calling softly (a sound I never tire of hearing)…but, it wasn’t raining.

The eastern sky showed signs of a gray beginning, but soon surprised us with yet another beautiful sunrise.

Mist hanging above the pocosin at sunrise

A thin layer of mist hung above the pocosin surrounding us. Our fellow bird counters arrived (making a total of 4 of us for this portion of the 15-mile diameter circle we have counted every year since 1985). As we surveyed the lake estimating the number of Tundra Swans, Lucas spied something unusual – a White-tailed Deer was swimming out in the middle of the 2700-acre lake (unfortunately, way too far out for a photo in the dawn light). As we watched (and wondered what the heck this deer was doing out there so far from shore) the doe was seemingly being escorted by a squadron of swimming swans. She finally turned and headed north toward the closest shoreline. We became distracted by some flying birds (after all, it is a bird count) and we assume the deer made it safely to shore….but, this is a first in my thirty years of visiting this refuge. Lots of birds, a swimming deer, and a beautiful sunrise – maybe this wasn’t going to be such a bad day after all.

White birds in green wheat on a gray day

The Pungo weather machine had a different idea. It soon turned totally overcast and the sky took on a lead gray appearance. By 9:30 a.m. it was raining, softy at first, and then much harder.

The legendary Pungo roads, which had been quite manageable at first, soon became waterlogged. Luckily, they were still largely passable, with a solid base hiding beneath the ominous-looking standing water, and only a few deep ruts to give you pause. But, if this wet weather continues much longer, the roads could face some issues with flooding as the water in the canals and adjacent swamps is only inches away in places.

Snow Geese feeding in cornfield near our car

That is how the day progressed – rain, not rain, more rain, brief break, more rain. We managed to get out and walk down “Bear Road” a little ways and pick up some woodland birds and sparrows (and see three bears), but we also spent more time watching birds from the car than usual. After lunch we were treated to a close view of a flock of Snow Geese in a field next to the paved road. 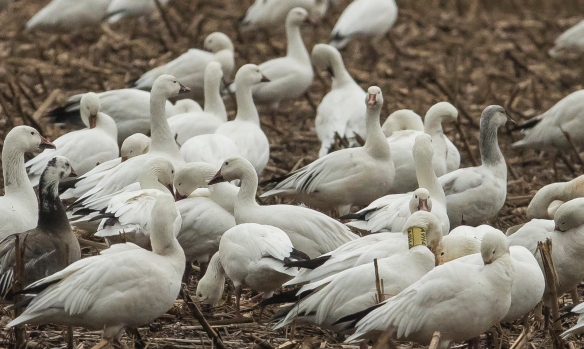 Another neck collar in the flock

We parked and they noisily munched their way right up next to the car, making it easier to find the few Ross’s Geese in the flock, and a couple of collared Snow Geese.

Lone Tundra Swan on the impoundment

After a particularly hard rain, we drove down along the south shore of Pungo Lake to where the road is closed due to flooding. There we spotted a very wet Wild Turkey far down the road. On the way back, we passed a lone Tundra Swan that slowly swam away from the edge of the road. Probably not a good sign – a swan by itself, and unwilling (or unable) to fly away usually means an illness or injury, and that usually means a short life in this predator-rich environment.

Heavy rains late in the day had us heading out

By late afternoon, the cycle of rain and clearing skies gave way to just rain….heavy rain. No traditional late afternoon walk down Bear Road, no sunset with swans flying overhead, no listening for owls as we walked toward the car, and no watching Woodcock zip by into the fields for their nightly feeding forays (luckily we got both of these crepuscular species at sunrise). In spite of the warm temperatures and wet conditions, it had been a surprisingly good day with some good birders. The overall numbers (over 60,000 individuals) for our section of the count are down from previous years (especially for Snow Geese), but we did okay in terms of species (73), thanks, in part, to Lucas’ keen birding ears. The crazy temperatures also gave us 6 species of butterflies, 3 species of frogs calling, and numerous biting flies (and even a few mosquitoes)! Certainly not your typical Christmas Bird Count in North Carolina. I look forward to seeing what other surprises the refuge has for me in the next few weeks as I lead some trips to observe winter wildlife. If interested in scheduling a trip, please email me.