Backpacking: An extended form of hiking in which people carry double the amount of gear they need for half the distance they planned to go in twice the time it should take.

Melissa loves to backpack. That is an understatement. And I love to be in the places that backpacking takes us. It is the getting there that sometimes gets me. So, Melissa, the quote above is just a joke (sort of). This trip was planned between our birthdays (a several year tradition for us) to be an outing to one of our favorite spots, Dolly Sods Wilderness in West Virginia (see previous post). But the weather forecast looked rainy in WV, and we are not fans of long hikes in the rain, so we changed plans at the last minute and headed to an area Melissa had visited on a recent Museum workshop – the Shining Rock Wilderness. This is the largest wilderness area in North Carolina at about 18,000 acres. It is well-known as being one of the most scenic hiking areas in our state, with excellent views from several mountaintops over 6000 feet. There is easy access from areas near the Blue Ridge Parkway, making this a very popular destination on weekends. We decided to start from a lower elevation at the Big East Fork Trailhead and had planned to hike the Old Butt Trail (no comments, please) up to Shining Rock. But, as is apparently common in this area, we missed that trail juncture and ended up on its loop counterpart, the Shining Creek Trail. Both of these sections are described as difficult. I agree with that judgement as they climb about 2600 feet in a few miles over very rocky terrain. But Shining Creek is absolutely beautiful and, being on a weekday, we had no company on the way up. 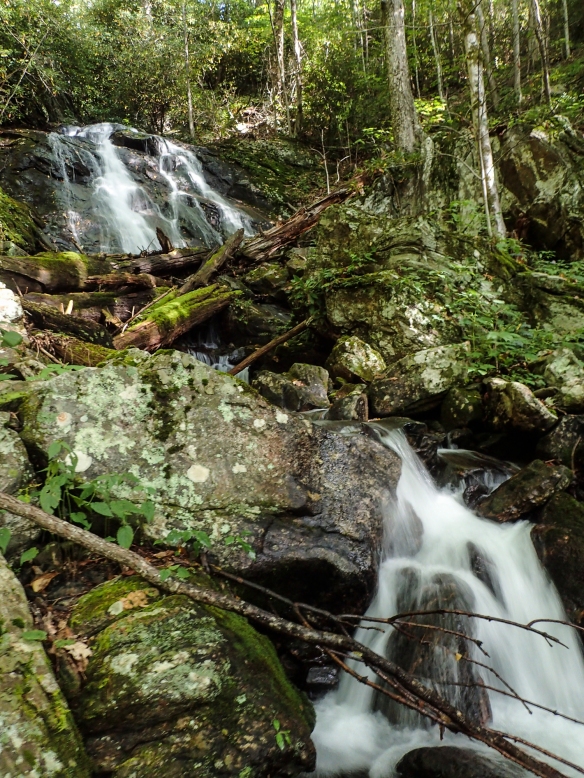 A tributary to Shining Creek (click photos to enlarge) 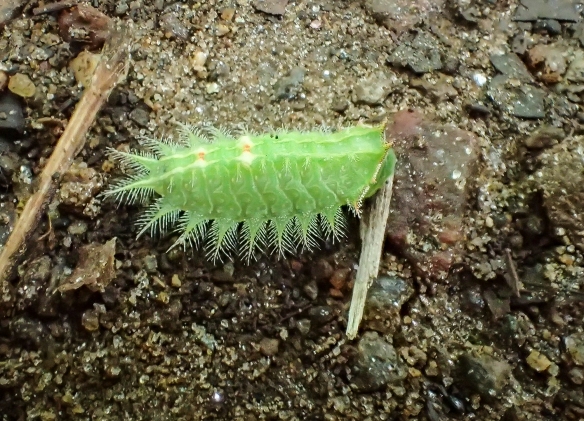 Crowned Slug, the first of many caterpillars we found along the trail 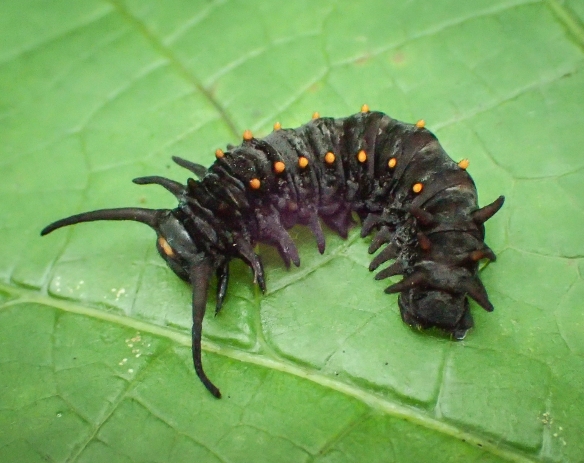 Pipevine Swallowtail larvae were a common sight in the woods feeding on their host, Pipevine 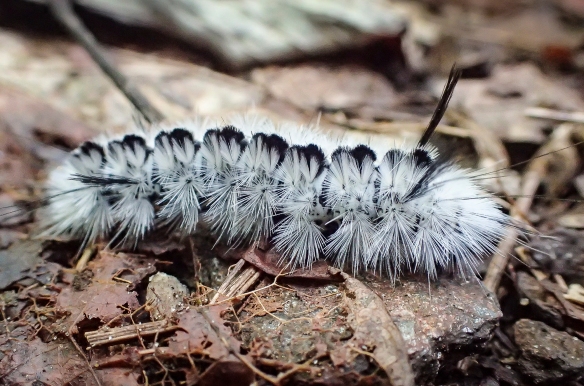 With the late start, we didn’t make it far up the trail before deciding to camp at a relatively flat spot above the creek. While sitting at camp, Melissa found a Blue  Ridge Two-lined Salamander crawling up her leg. That evening, we went down to the creek to wash up, and I got distracted by other salamanders crawling about in search of their evening meal. It really is amazing how many salamanders must live in these mountains! 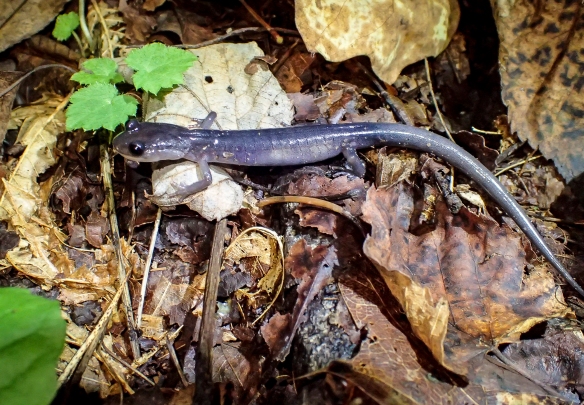 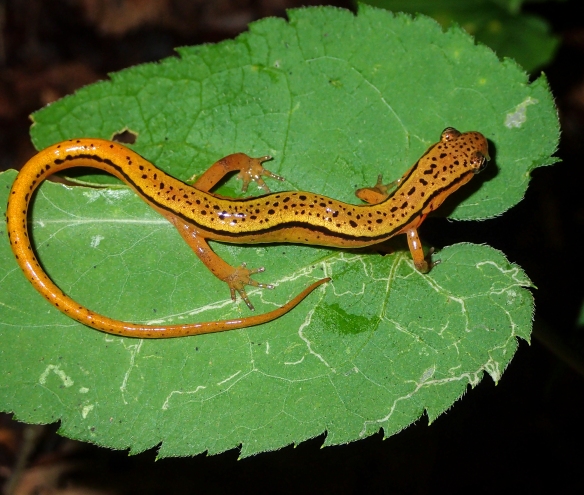 One of three Blue Ridge Two-lined Salamanders we saw down by the creek. This species often climbs up on vegetation at night (or a hiker’s legs) looking for invertebrate prey. 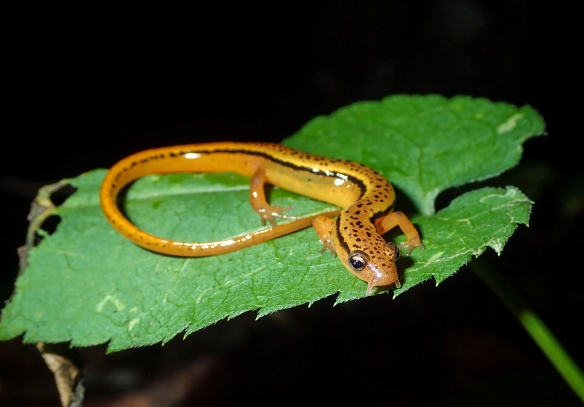 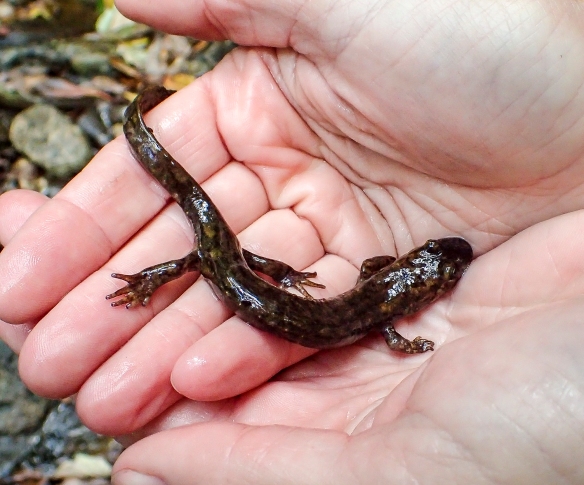 The next day’s hike was a difficult one for me (somehow, our birthdays seem to have taken some umpf out of my legs, and added zip to hers) but we made it up to Shining Rock Gap with plenty of time to set up camp in a sheltered spruce grove. We took our stove and fixed dinner atop an outcrop of brilliantly white quartz that gives this mountaintop its name. 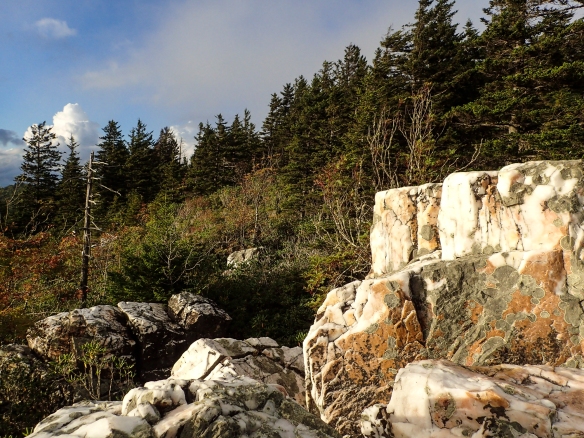 Outcrops of white quartz shine in the late day sun at the summit of Shining Rock (elevation – 6000 ft.) 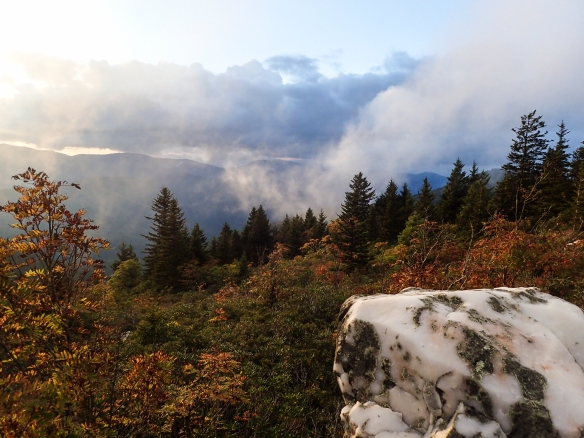 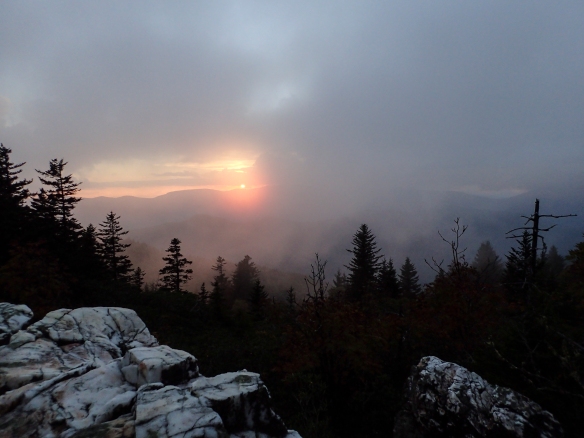 The next morning we hit a section of the famed Art Loeb Trail in search of views from a grassy bald. It turns out, there aren’t that many places through this stretch with that type of scenery. You are mainly hiking through rhododendron thickets and vast expanses of waist-high blueberries and blackberries. We broke out into the open at Flower Gap, but another couple had claimed that spot for the night. We weren’t keen on that spot anyway as we had heard from two guys at the trailhead that a bear had raided their supplies in this gap two nights ago, a fact we shared with the couple. It turns out, those guys had not brought a bear canister, a requirement when camping in the Shining Rock Wilderness. We went on a bit further and climbed a side trail up to the summit of Grassy Cove Top (elevation – 6049 ft.). There were a couple of tent-sized grassy patches, so we claimed one for the evening and had time to relax and enjoy the stunning views. We were hoping to see some raptors migrating, but it seems we missed the peak migration by a week or so. We did manage an American Kestrel, a Northern Harrier, an unidentified Buteo, and two Broad-winged Hawks, along with dozens of Cloudless Sulphur butterflies, and some mystery critters at sunset (they looked like large insects, but we couldn’t tell for sure in the low light). 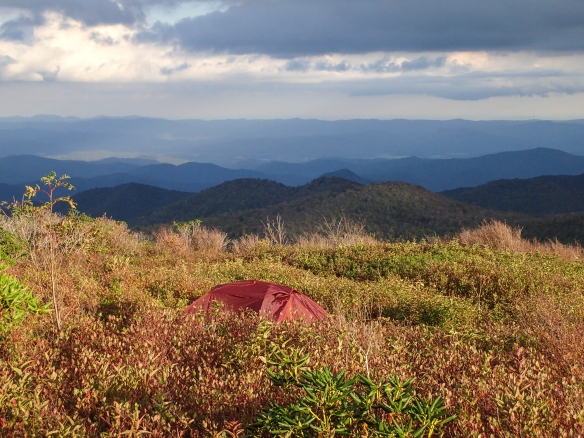 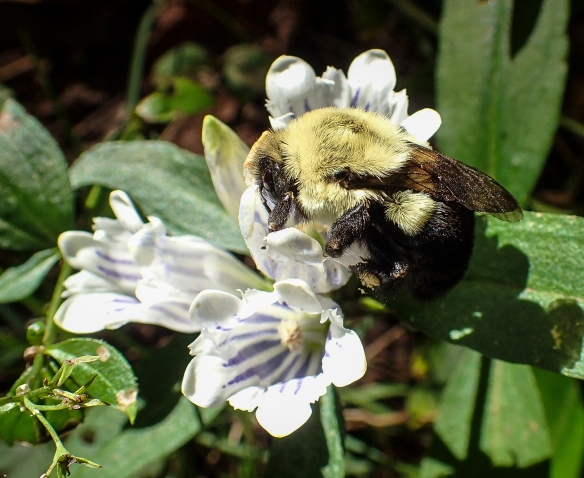 Bumblebees were quite common in the balds, and here is one on a Gentian along the woodland trail

We strung our hammocks in a nearby stand of spruce to have some time in the shade, and then went back out to a rock outcrop for dinner and an amazing sunset. 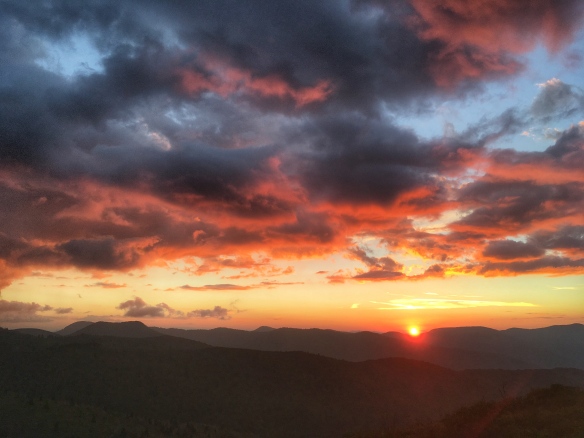 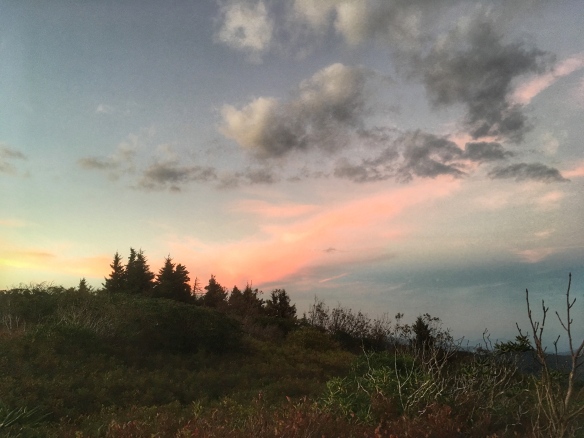 Looking north from our camp after sunset

That night, we sat and looked at stars, got great views of Venus, Jupiter, Saturn, and Mars, and were thankful to be here rather than in the distant lights of towns and cities on the horizon. 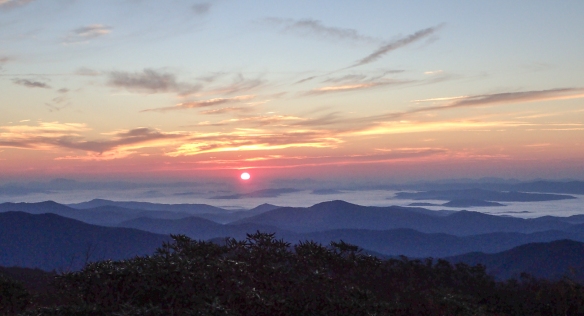 Melissa mentioned the beauty of simple things like the scent of spruce and fir, an unobstructed view of the night sky, and the quiet of a mountaintop. She is right, this is why we do this. A more appropriate quote for backpacking these rugged hills might be this one by the muse of the mountains, John Muir…

Climb the mountains and get their good tidings. Nature’s peace will flow into you as sunshine flows into trees. The winds will blow their own freshness into you, and the storms their energy, while cares will drop off like autumn leaves. As age comes on, one source of enjoyment after another is closed, but Nature’s sources never fail.

Looking forward to our next birthday adventure (but we don’t have to wait that long, honest).