Live your life each day as you would climb a mountain. An occasional glance toward the summit keeps the goal in mind, but many beautiful scenes are to be observed from each new vantage point.

Seems like just a little over a week ago that I was struggling to climb a mountain with a heavy load on my back…wait, it was just a little over a week ago! And this past weekend, we did it again. This time, in one of our favorite areas, the Mt. Rogers-Grayson Highlands region of southwest Virginia. My back was a bit sore from chainsawing fallen trees after the remnants of Hurricane Michael passed through, but we had planned this trip for some time. Melissa’s sister and boyfriend were going to meet us at Grayson Highlands State Park for a two-night adventure in the high country of Virginia. The weather forecast was a bit iffy, but off we went, ever hoping for the best. Our first day was a short one and after a hike of only a couple of miles, we found a great campsite along a beautiful mountain stream (Wilson Creek, I believe). 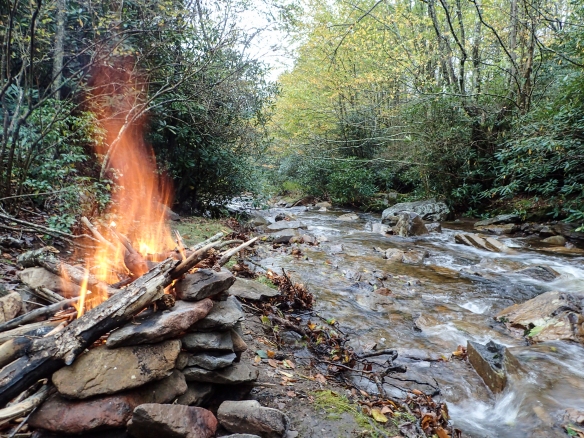 The overcast skies soon turned to rain after dark, but we were comfortable under a stretched tarp and the fire continued until a break in the rain let us get into our tents. 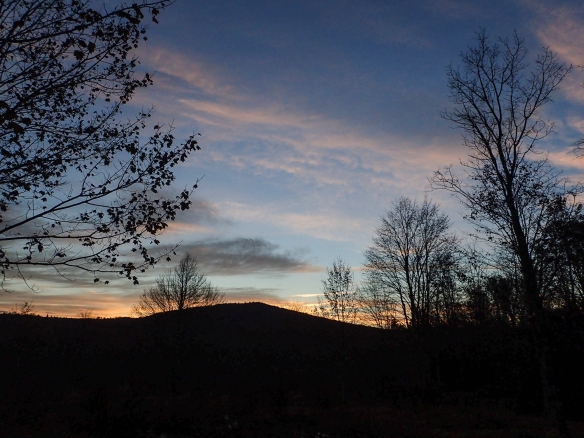 Sunrise in the high country

The next morning dawned clear and cool, with a mist drifting through the trees. It finally felt a little like Fall. 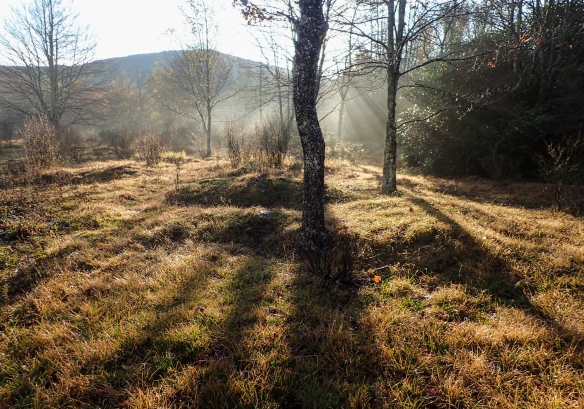 Early morning mist in the boggy meadow near camp

I love early mornings – the quiet, the morning coffee, the first stirrings of the wildlife around you, and the softness of the light that gently touches everything, especially if there has been condensation overnight. I spotted a couple of shimmering orb weaver spider webs at the edge of the trees and we walked over. One was a particularly odd design. At first, we thought the spider was still busy weaving, but a closer look showed it was sitting in the center and the interior spirals of silk were there, just not glistening with dew like the rest of the web. 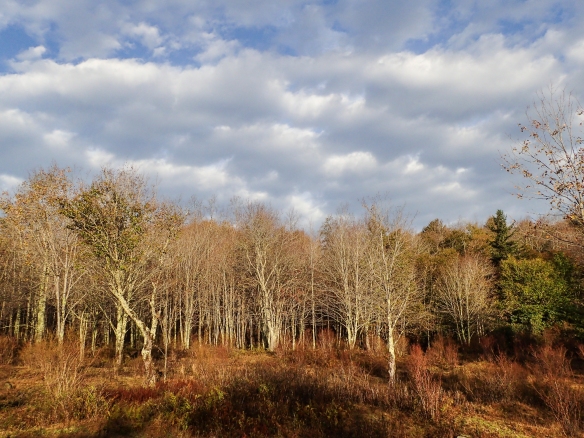 A scene near camp in the early morning light 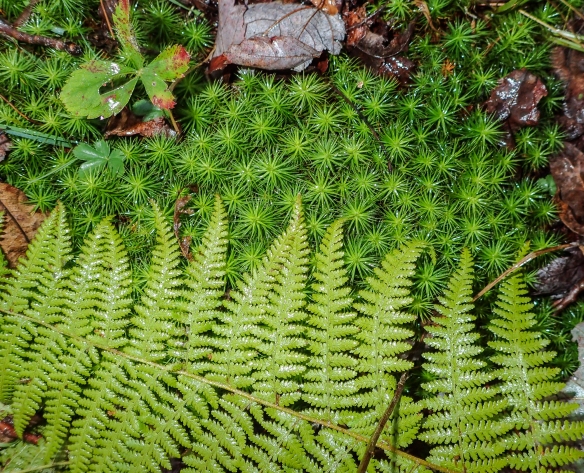 The greens of mosses, club mosses, lichens, and ferns added a rich backdrop to every scene

I suppose backpacking on wet, rocky trails does have one advantage – I tend to not look around too much in order to keep my feet under me and the rest of me upright. Though I may miss some beautiful scenery or treetop wildlife, I do see a lot of interesting things on the ground. The lushness of moss hummocks and beds of club mosses were particularly noticeable on this trip. And there are still caterpillars out there to be found!

A Fall webworm (I think) covered in dew

Our day 2 hike was about 7 miles, with a steady climb through the forest to the more open high country for which this region is so well known. In addition to the expansive mountain views, the other major tourist attraction in this area are the herds of wild ponies. I saw an article stating this region is “the only place on the Appalachian Trail where you can see wild ponies”. Depending on which reference you use, the ponies are believed to have been introduced in the early 1940’s by locals wanting to keep the area open, or by the Forest Service decades later for the same land management purpose. There are believed to be about 100 ponies spread out over thousands of acres of high grassy balds and forests. They live up here year-round, but are watched over and rounded up once a year by the Wilburn Ridge Pony Association. The Fall round-up serves to check the health of the herd and to auction off some of the ponies (mostly males) to keep the population under control. Park rules ask visitors to observe the ponies from a distance and to not feed them. We had to step aside a couple of times as ponies walked by on the trail.

A foal nursing along the trail

Grazing of cattle in the highlands has long been a part of the local way of life, and in 2012, the Forest Service allowed herds of longhorn cattle to graze alongside the wild ponies during the growing season. The cattle are removed every winter, but the ponies stay through the bitter cold months. 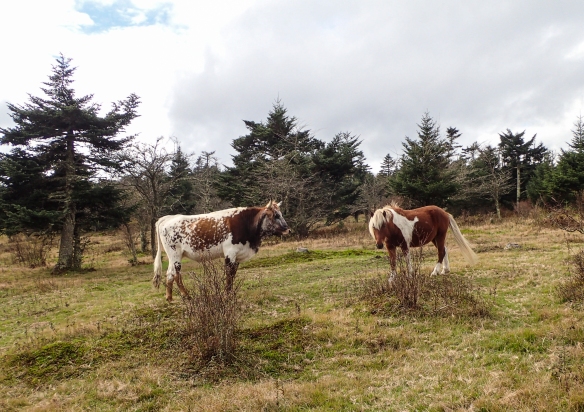 As we approached the rocky outcrops of Wilburn Ridge, the strong winds caused us to rethink our plans for camping on the crest. So, we searched for something a little more protected in the open landscape. We ended up picking a spot of the leeward side of the ridge, partially protected by a large rock outcrop and a small grove of trees.

Our home for the night – not a bad view

There were a couple of campfire rings and a few relatively flat spots without too much pony poo, so we were able to set up camp, gather firewood, and relax and enjoy the spectacular views.

Sitting by our protected campfire looking out toward our tents

Shortly after dark, it started to rain, so we had an early end to the evening, climbing into our tents and hoping the gusty winds would subside before a tent wall collapsed under the strain. At one point during the night, I woke up to a sky full of stars. But by sunrise (well, when it got light anyway), it was a different story.

Inside a cloud on Wilburn Ridge

We were socked in and the view was a bit different from the sunset the night before. The wind was gently blowing as the clouds blew around us. A couple of ponies were barely visible100 feet away, and there was an eerie silence, save for the whap, whap, whap of a tent flap. It was only a couple of miles to the cars, so we grabbed a quick breakfast, packed up our wet gear, and headed out.

Below the clouds on our way out

The trail down the ridge is rocky but we were soon below the cloud deck and could see rolling ridges of highlands stretching to the gray horizon. Though the skies had been leaden for much of the trip, we appreciated the solitude and serenity of our time in the high country and are looking forward to a return trip. In case you go, our hike took us from the Overnight Backpackers Parking Area near Massie Gap (you must register and pay at the entrance station to Grayson Highlands State Park), up the AT to the Scales Trail, then to the Pine Mountain Trail, and finally rejoining the AT back to the parking area.

8 thoughts on “Hiking the High Country”