Day two of my wanderings started at sunrise at Marsh A in the Pungo Unit, watching the swans’ world awaken. There were two other cars enjoying the start of the day as hundreds of swans started to stir. 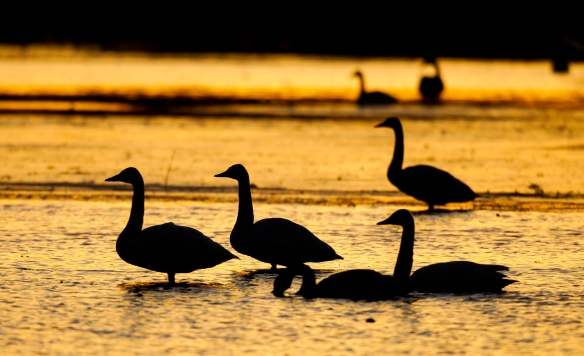 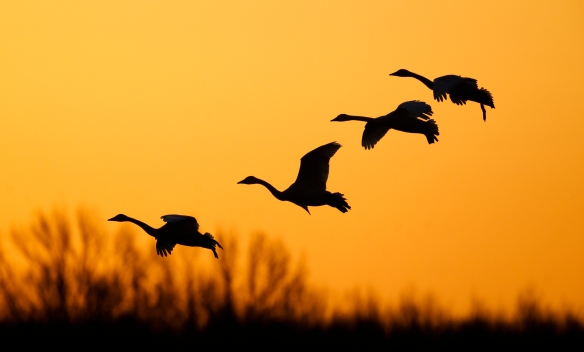 A staircase of swans coming in for a landing.

When the orange backdrop faded to white light, I drove down the road hoping to see, well, anything really. I did find some birds and lots of signs of critters (deer tracks, beaver-chewed logs, etc.). I headed back toward Marsh A and found the seven sandhill cranes preening in the middle of the swan flock, a bit closer to the road than the day before. They soon started walking around and then suddenly took flight, headed to the same field of corn stubble I had seen them in last week. 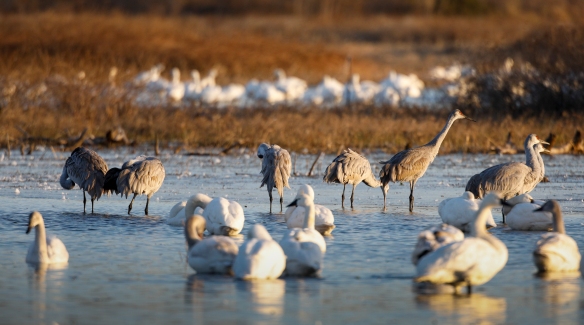 The sandhill cranes have been a big draw for visitors to the refuge this winter.

The cranes (6 of the 7 in this photo) heading out to feed in a nearby field. One bird had its legs oddly tucked as it flew.

As I sat in my car enjoying the scene I saw a man trotting down the road toward me, camera in hand. He stopped, pointed his lens toward the canal and fired a couple of shots, then resumed heading my way. I soon saw the object of his obsession, a beaver swimming in the roadside canal. I got out and fired off a few myself as the beaver swam by, probably heading to the chewed trunks I had seen earlier. 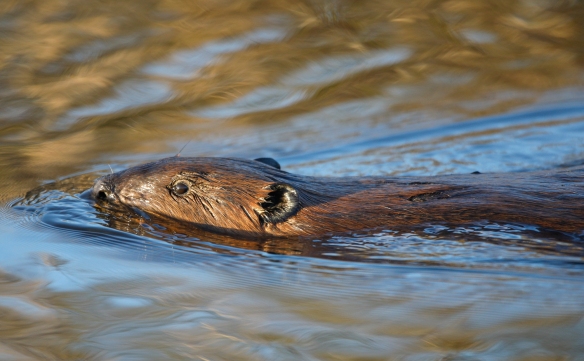 A beaver swims purposefully up a roadside canal.

A cold wind had most of the songbirds puffed up, hunkered down, or trying to find a sunny spot to stay warm. 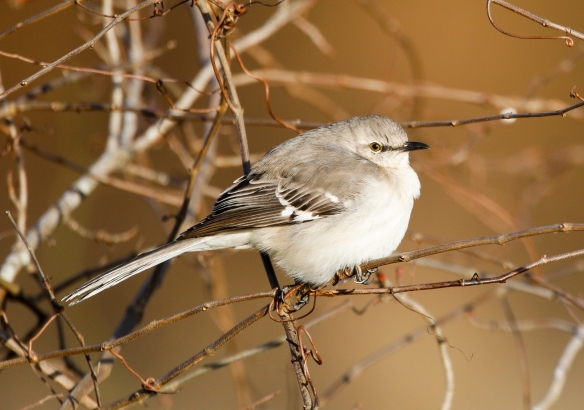 A Northern mockingbird is fluffed up in the cold. 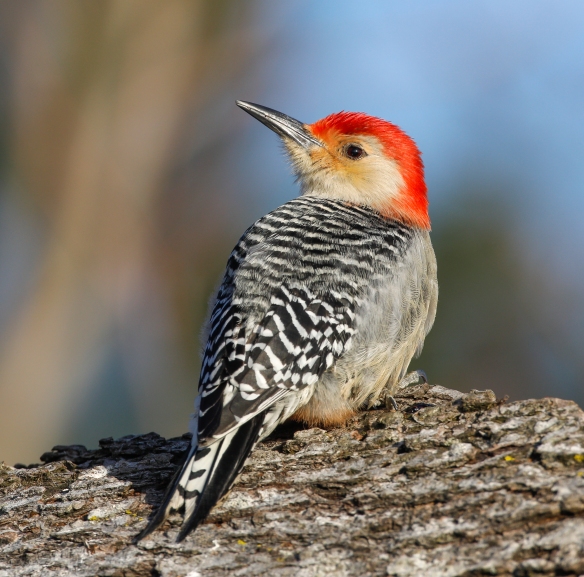 This male red-bellied woodpecker posed nicely in the morning light. 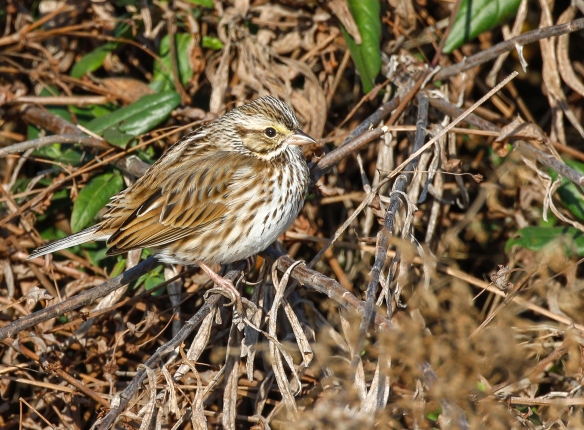 Savannah sparrows tend to stick close to the ground and are found foraging along roadsides and the shorelines of canals at Pungo.

I saw a stopped car down the road with people out looking at the canal. Based on the location, I guessed otter. As I headed that way, they got back in their car and drove off leaving me thinking whatever critter it was had given them the slip. But as I got to the spot, I saw a ripple in the canal where something dove underwater. In a few seconds, up came an otter and then, just as quickly, it disappeared. I got out and waited. There were three otter! But they were being skittish and moving quickly. Finally, one came out on the bank opposite me and started munching on something (it looked like a fish). The otter made quick work of it and was back in the water. 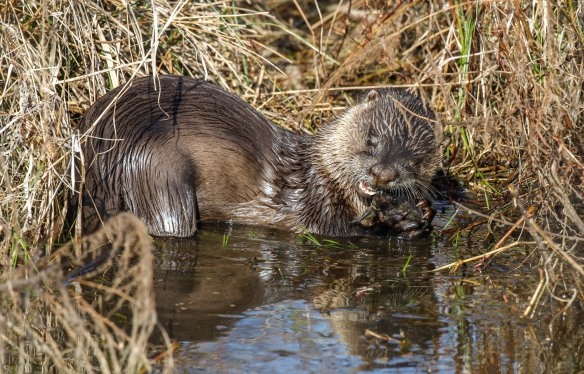 One of three river otters I saw in D-canal.

After a few minutes of hide and seek, two otters came up and one was loudly crunching its catch. This happened a few more times in that same spot and after carefully looking at the images I could see this hungry fellow was catching large crayfish. 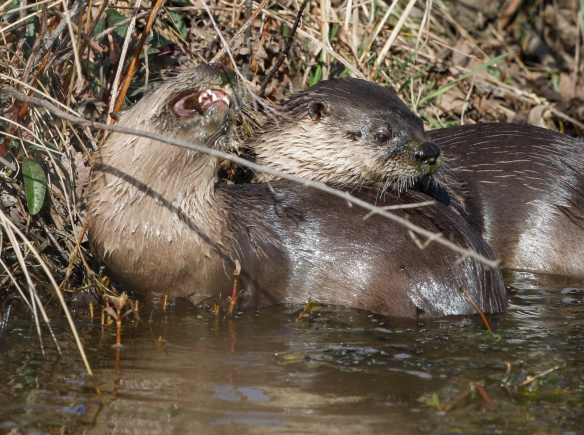 One otter caught and crunched three crayfish while I was watching.

After spending several minutes with these furry dynamos, they went underwater just across the canal from me and vanished. I looked up and down the canal and waited, but they did not reappear. Even though one had hidden under some overhanging vegetation at one point, I don’t think that was the case this time. I can only guess there is a hole in the bank that is their refuge once they have had their fill. So, I decided to head out and wander to my other destinations for the day – Mattamuskeet and Alligator River National Wildlife Refuges. Driving into Wildlife Drive at Mattamuskeet, I stopped at the usual spot near the entrance and watched a stoic great blue heron surveying its world. 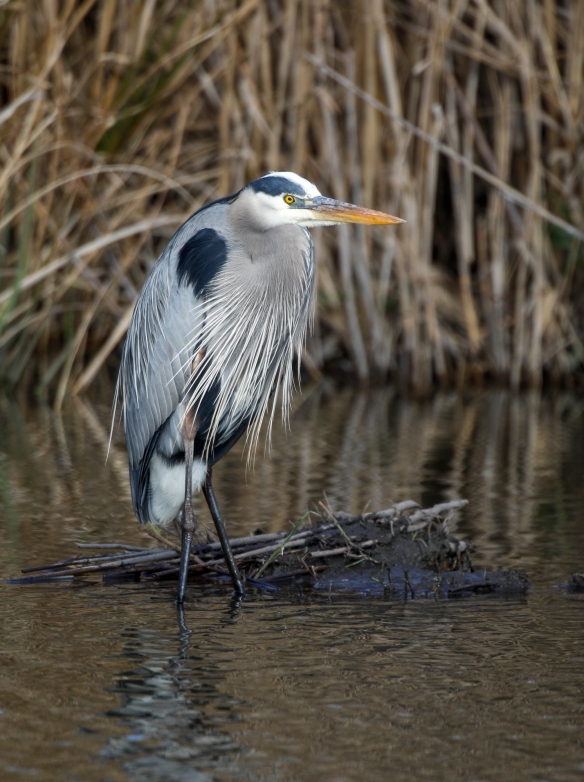 A great blue heron looking rather dapper in its feather finery. 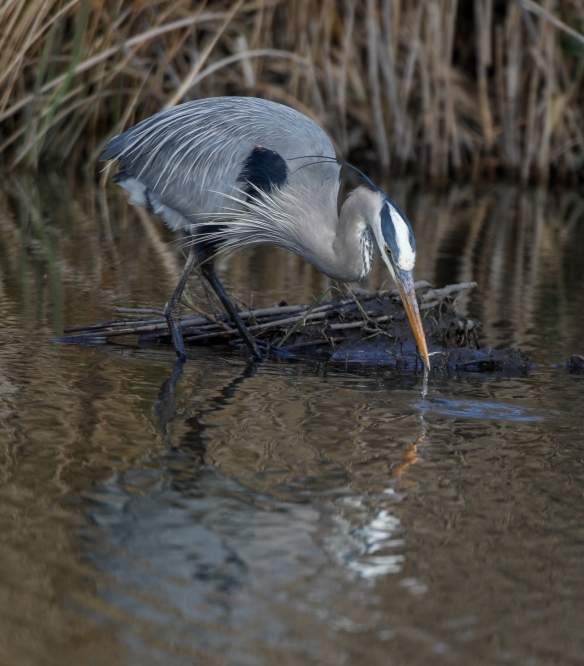 The heron made a quick move and nabbed a tiny minnow snack.

After catching one small minnow, the heron flew off down the canal with dreams of bigger fish. There were the usual hundreds of ducks, Canada geese, and swans in the marsh along the drive, but the light is usually too harsh for very good images, so I drove on to the end of the dirt road. There is a small loop trail at the end that crosses a canal and leads to a large marsh. A few ducks were scattered in the marsh and several songbirds were moving around the thick brush along the trail. 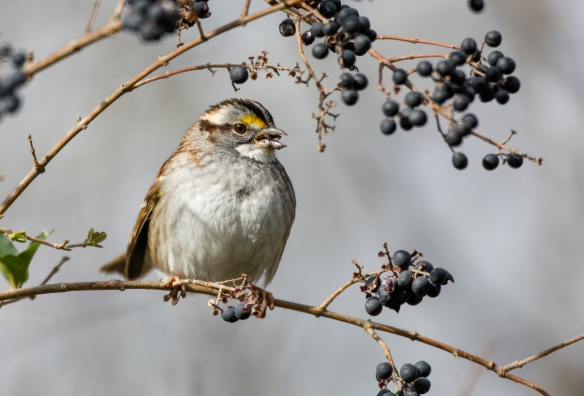 A white-throated sparrow helping to spread invasive privet by munching on one of the fruits.

Things were kind of slow, no doubt in part due to the blustery conditions. On my way out, I spotted an anhinga drying its wings on the bank. It was shivering in the cold and any time a cloud passed, it pulled its wing in against its body, then stretched them back out when the sun returned. Though not common in this part of the state, I often find these ‘snake birds” at Mattamuskeet in the winter. I think this one was wishing it was in Florida. 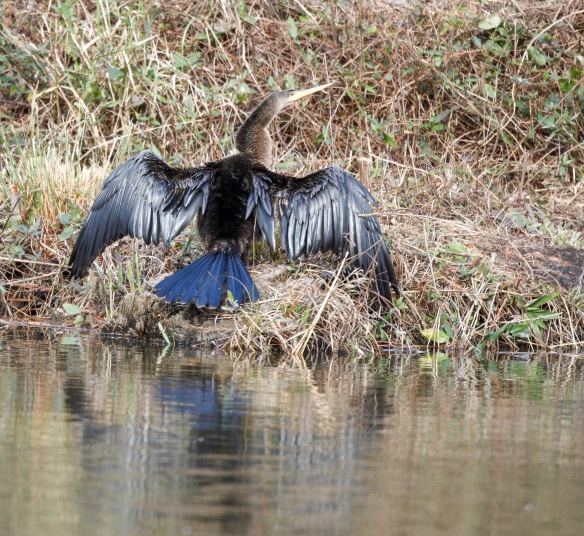 A shivering anhinga drying its wings in the sun.

From Mattamuskeet, it is about an hour drive to Alligator River NWR along Hwy 264. You pass through some of the most desolate (but hauntingly beautiful) landscapes in our state. Once on the refuge, I spotted groups of waterfowl (mainly mallards, pintails, and swans), one bald eagle, and a few other raptors, but all were pretty far out, so I just observed sans camera in the rapidly fading light. As I headed out toward the Outer Banks for my night’s lodging (mainly so I could dine at Tortugas Lie restaurant – I highly recommend it), the sun dipped below the bank of clouds, setting the landscape to the east on fire with red light, and painting the western sky with bold swaths of orange. Another good day of wandering. 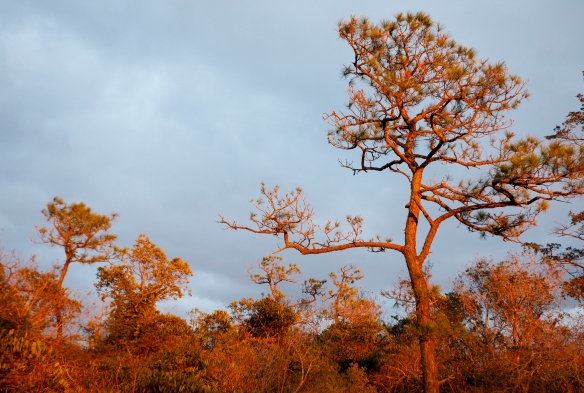 A setting sun created a glow on the pocosin vegetation. 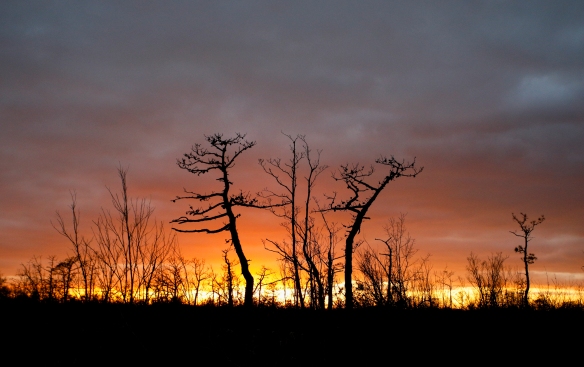 13 thoughts on “Cruising the Coastal Plain”