On Day 3, my last day of this coastal adventure, I drove down Hwy 12 to Pea Island NWR. But, as I had feared, the predicted winds were also there, blasting 15-25 mph with sand piling up on the highway. It wasn’t looking good for exploring the refuge or photography. At the visitor center, white caps in the pond were a sure sign that bird life would be elsewhere. I did spend some time at the next pond watching some American white pelicans in their delicate feeding ballet, but they were far out on the water and the wind was shaking the car, so I reluctantly headed inland. I drove through Alligator River without much to see (waterfowl far out in the flooded fields and an occasional raptor) and then on to Mattamuskeet. The winds seemed to have every living thing laying low. I spent a few minutes walking around and observing some cormorants as they came in for a post-breakfast siesta, but I soon decided to head on towards “my” refuge, the Pungo Unit.

I drove through the refuge scouting for bear, otter, or beaver, but saw none. So, I settled into the corner of Marsh A where a small group of tundra swans was feeding alongside a few ducks (mainly Northern shovelers, mallards, and Northern pintails). The sandhill cranes out toward the middle of the marsh were the main attraction for the two other cars at the site, so I had my little corner all to myself. I pulled my car in at a slight angle (off the road enough to allow easy passing by other cars), got out the camera, and sat and watched and waited. When I first pulled up, the pintails flew off, and the swans swam slowly away, but then stopped when I stopped. This is where so many people make the mistake of getting out of their car which often causes any nearby ducks to fly, and may send the swans swimming even farther off. Your car is definitely your best blind, and patience is your ally. 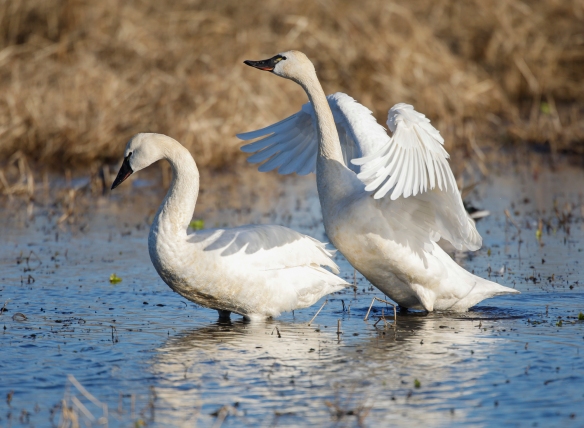 The longer I sat there, the closer the birds came, and the more other birds started to join them. The wind was still blowing but it became a photography assistant as birds were held in suspension as they flew in to join those on the water. 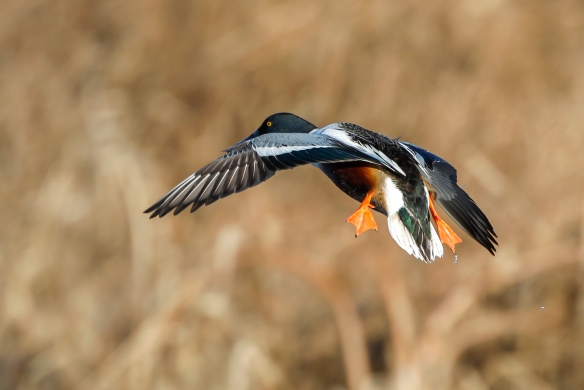 A Northern shoveler drake with landing gear down

A Northern pintail drake flies by checking out the marsh

Northern pintails coming in for a landing

A Northern pintail setting down in the marsh

I was amazed when I heard the snow geese lift off the lake that I had spent the last two hours sitting in that spot watching birds come and go. But, the geese soon settled back down, so I continued my vigil. Then I heard the sounds of just a few snow geese overhead, and saw a small flock of 100+ flying south. Over the next 30 minutes, small groups of snow geese lifted off and headed out. It was earlier (about 3:30 p.m.) than my previous visits, and unlike before, a few hundred here and a few hundred there were flying off, instead of the massive flock all at once. 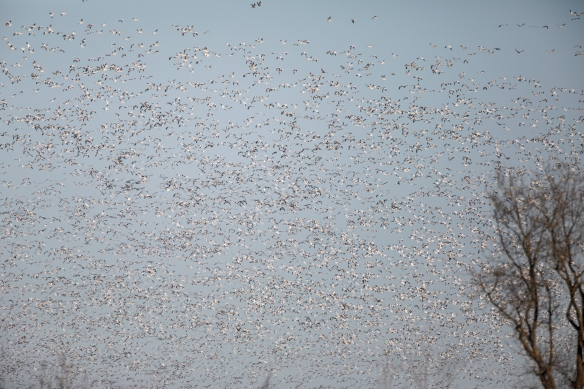 I finally decided it was time to head out toward the entrance for the evening show. As I pulled up to join a few other carloads of goose watchers, the snow geese were doing their thing, circling in large numbers and gradually settling into the field alongside the swans.

The flock settling into the field late in the day

The light was perfect on the circling birds, causing them to blink their whiteness as they turned at different angles to the setting sun. The sounds of thousands of birds flying and feeding in the fields is somewhat mechanical, like being inside some huge factory with rumbling machinery. Then, a lull in the noise, followed by an explosion of wing beats as the snow geese lifted off in waves.

Thousands of snow geese suddenly exploded into the sky

As I watched them circle, I saw a dark form flying far out over the field. This was what spooked them, an eagle! I snapped a few pictures, trying to get the eagle in the same field of view as the panicked snow geese, and then resumed watching the birds quickly return to the field to feed as the eagle disappeared. It wasn’t until I got home and looked at the images that I got a nice surprise…I’m pretty sure that potential goose predator was a golden eagle! Golden eagles are not common sights here in NC, but I have seen them several times in winter over the years here at Pungo, lured no doubt by the thousands of waterfowl on the refuge. This is a heavily cropped image, but all indications are it is a golden eagle, not an immature bald eagle. The lack of any whitish mottling under the wings and what looks like a golden neck sure seem diagnostic, but if any of my bird nerd friends have a different opinion, please let me know

As the sky turned orange I once again drove to the other side of the fields, where I sat, alone, watching silhouettes head back to the lake. Once again, the sights and sounds of Pungo filled me with awe and a sense of place that I seem to find in only a few other locations (Yellowstone being the other that I visit regularly). I know there are magical things to be found in so many natural areas throughout this land, but, for me, there are some special places that always evoke wildness, freedom, and peace. Familiarity is probably part of the reason for holding these places close to my heart. Pungo is such a place. No matter where I travel, I will always return to sit in wonder at the spectacle that is Pungo, and will feel the need to share and protect this land and the wild things that call it home.