Paying attention to the world around you will help you develop the extraordinary capacity to look at mundane things and see the miraculous.

Last week I did a post on the courtship behavior and egg-laying by Falcate Orangetip butterflies in our yard. I watched a female lay two eggs on two different plants of Hairy Bittercress, a common yard weed in the mustard family. 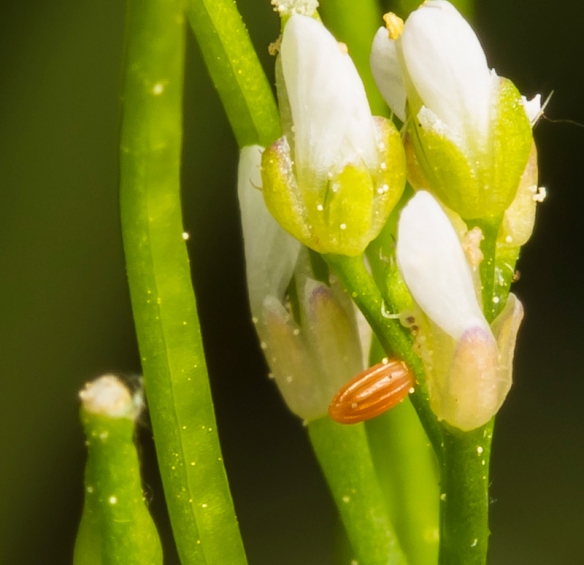 Times being what they are, I figured I would dig up a couple of the plants that had eggs on them and bring them inside to observe. I have never found one of the incredible thorn-mimic chrysalids of this species (they are tiny and apparently really blend into branches and tree trunks), so I thought this might be my chance if I could keep these little guys alive long enough. Most butterfly eggs I have watched hatch in just a few days, so I was getting worried when a week had gone by and nothing had happened. Each morning I pulled the now potted weeds out of the butterfly cage and examined them with a hand lens to see if the egg had hatched. Finally, yesterday morning (March 30)… 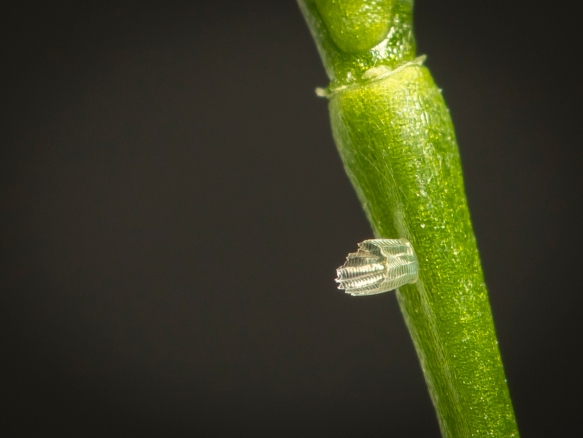 The remnants of one of the butterfly eggs; the other egg was apparently totally eaten by the larva.

…both eggs had hatched – about 11 days after they were laid! The first plant had about half of the egg shell remaining. When I searched the other plant, there was no egg casing at all. That is pretty typical since many butterfly and moth hatchlings will eat their egg shell right after emerging. 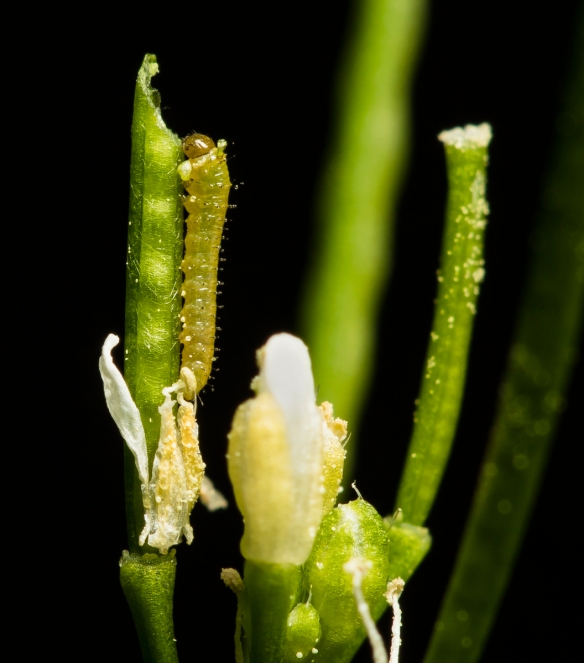 The tiny first instar larva of a Falcate Orangetip butterfly.

It took some searching with a magnifier to find each of the new larvae. They are only about 2 mm in length and have tiny hairs scattered on their body with what looks like a drop of liquid at the tip of each hair. This may be some sort of predator deterrent. I found both larvae feeding on a developing seed pod of their respective plants. With the month ahead being one of mainly home-bound observations, I’ll keep tabs on these guys and try to provide an occasional update on their progress and changes (because I know you just need to know:).

7 thoughts on “The End Result of Butterfly Courtship”