We delight in the beauty of a butterfly, but rarely admit the changes it has gone through to achieve that beauty.

Remember how excited I was to finally photograph a chrysalis of a Falcate Orangetip butterfly in that post a few days ago? Well, I kept watch on the remaining caterpillars, hoping to catch one in the act of transformation, and got lucky again. One morning when I checked on the larvae, I found one in its prepupa stage. That is the stage between a free-living caterpillar and its pupa (chrysalis). A butterfly larva usually finds a sheltered spot and attaches itself to a twig or leaf (or whatever it usually forms its chrysalis on) with silk. In many groups, the prepupa hangs down below something (like a monarch in its J-shaped prepupa). For this species (and swallowtails), it attaches itself at the rear end with silk and then forms a loop of silk that it slips its head through. The position reminds me of a telephone line worker attached to a pole with a safety harness. The prepupa stage usually lasts about 24 hours for the species I have observed, so I set up a photo chamber with the prepupa in it, and waited. 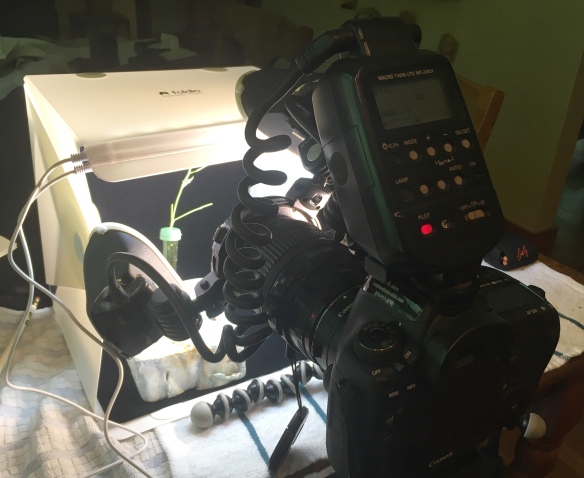 By the way, I want to thank Sam Jaffe of The Caterpillar Lab for his suggestion of the Folio brand portable light box as a tool for photographing insects. It has its own LED light strips and changeable background colors. And it looks good on a dining room table in times when no one can come to dinner.

The prepupa had formed during the night, so I anticipated it would be the next morning before it transformed. The first one managed to transform during the early morning hours before even I get up. This one was more obliging, and the next morning was still a prepupa, but starting to move slightly. I got some coffee and waited…for the next 30 minutes or so it just made slight wriggles. Then the C-shape started to straighten out, and I knew, from watching swallowtail prepupa do this, that things were about to happen. The video clip below shortens what took about 15 minutes to occur into 1 minute. The footage is at 5X the actual speed and I edited out clips to shorten it. I’ll let this amazing act speak for itself…