Some of you may have known him, and, even if you didn’t, you may have one of his bluebird boxes in your yard. Jack Finch started a non-profit, Homes For Bluebirds, to help restore his beloved Eastern Bluebird to the skies of the southeast. He built thousands of quality bluebird nest boxes and was tireless in his efforts to promote ways to enhance bluebird populations. When I worked at the museum, I made frequent trips out to his farm to purchase nest boxes for schools and to talk about bluebirds. He was always experimenting with ways to provide more food for bluebirds from raising mealworms to selecting for late blooming dogwoods that would produce berries later into the season. For awhile, he promoted mulberry trees as a food source, and that is how I ended up with a sapling many years ago.  I planted it in what was then a sunny spot near my shop, and now, the tree produces berries every spring for the local wildlife. I hope Jack would not be disappointed that his tree has more green and red than blue.

It turns out that Scarlet Tanagers are frequent visitors and berry pickers in this tree every spring. This week, as I was going in and out of the shop while tinkering on some woodworking projects, I kept seeing tanagers feeding. So, I brought out the camera, set up the tripod at the door, got comfortable in a chair, and waited.

The tree leans out over the driveway and has one branch down low at eye level. There are only a few spots where a bird can perch that present a clear shot through the branches and leaves, but it was great fun watching them come and go. They are active feeders in that they often have to flutter their wings to maintain their balance while reaching out to the twig tips for berries, adding to the photography challenges. 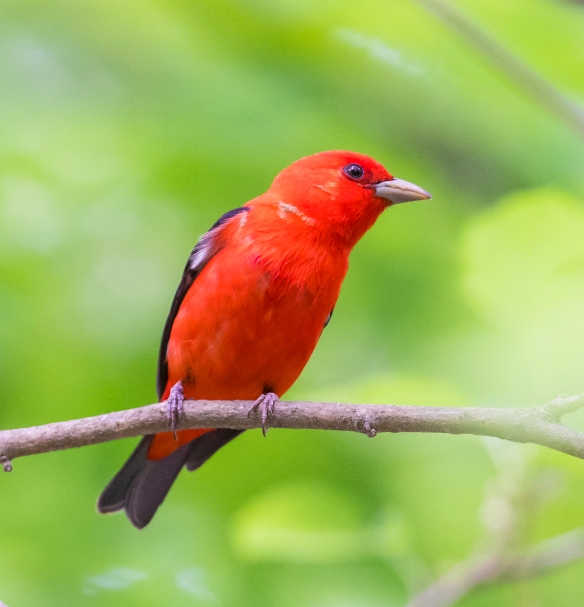 At first, I was usually seeing a pair, a male and female, coming together. On one visit, another male showed up! And a few seconds later, a male Summer Tanager flew in (but avoided having his picture taken), along with what I first thought was an immature male Summer Tanager. It had a lot of yellow coloration mixed with the red. In reading online, it seems that some older females may have a lot of red overtones (females are usually yellow), and this one’s colors are more blended than patchy. I’m not exactly sure which sex this one is, but now I’m leaning towards a female, as the immature males I have seen in the past were more splotchy. 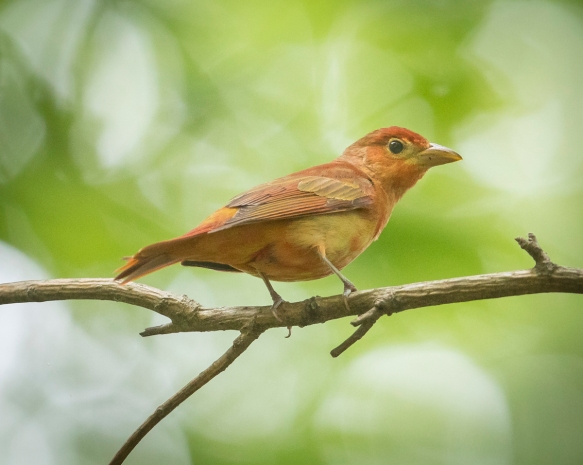 A Summer Tanager with a lot of red and yellow coloration

That certainly was a highlight of my mulberry viewing – five tanagers at once! In between tanager feedings, I saw a lot of other species going about their daily routines.

This female Northern Cardinal stopped in for a quick visit

An Ovenbird calling nearby finally came for a quick visit 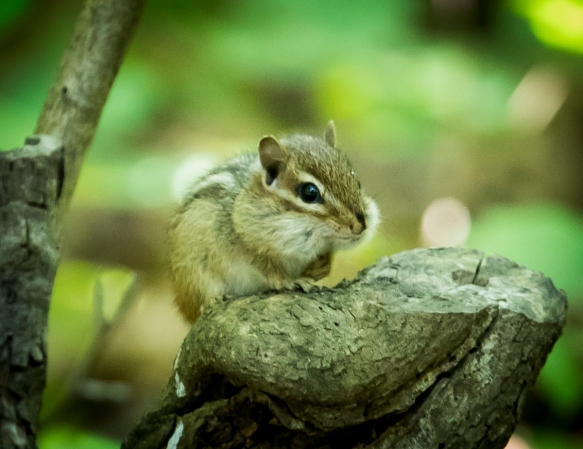 An Eastern Chipmunk, with both cheeks full, sat and watched me for about 5 minutes before deciding I was safe and moving on

A few notables that I saw but didn’t get photos for included Chipping Sparrows, Carolina Chickadees, Tufted Titmice, the family of Carolina Wrens that fledged from inside my shop, Rose-breasted Grosbeaks, Blue Jays, a Red-tailed Hawk, and a Black-throated Blue Warbler. But, the stars of the show are definitely the male Scarlet Tanagers. 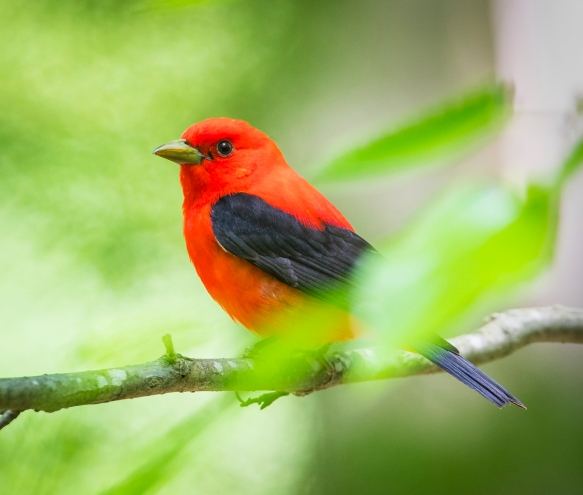 The tanager flies through the green foliage as if it would ignite the leaves.