This may not be what you expected if this came up in a Google search. My last post was about being back in Yellowstone… my paradise. It being early June, the park is full of babes… of the wildlife kind. I have seen many in my first couple of days, many too far away to get a photograph, but cool to see nonetheless. Of those eluding a portrait there have been Rocky Mountain Goats on high cliffs, Ravens that apparently fell out of the nest, a Chipping Sparrow nest with hungry babies, and Rocky Mountain Bighorn Sheep sleeping on what looked like a vertical wall of rock.

Thus far, three species have allowed me to grab some baby pictures.

Baby bison are everywhere in Lamar Valley. They spend much of the day sleeping, and then have bursts of energy and playfulness. I can sit and watch them for hours.

One set of siblings of a famous bear family provided some great viewing, but not so great photographs. Driving south, there was a huge bear jam near Tower, and when I saw that there were three 1-year-old cubs, I knew it was the same group I had seen last summer as cubs of the year. Their mother seems to have a preference for meadows close to the road and probably enjoys the huge backups of cars she causes. I drove through and parked in a pull out some distance away and then walked back toward the group of bears. I stopped well ahead of the 100 yard minimum distance required for bears and wolves and set up my tripod in the shade of a tree. Rangers were already on the scene directing traffic and trying to manage the crowds. There was a lot of contrast between the shady areas in the bright sunlight grasses so the photographs were not all that great, plus I was pretty far away.

Bear cubs playing in a tree

At one point all three cubs climbed a small tree and begin playing in it… the tree was shaking back-and-forth, but I have a feeling most of the people in cars that went by never even saw them. Finally, mom climbed a short distance up the tree and must have scolded them, as all three came down and followed her up the slope (to take a nap no doubt).  The bear jam began to break up, and the ranger closest to me walked straight towards me. I was wondering what I had done when suddenly he spoke up and thanked me for obeying the rules and being a respectful photographer. He said it isn’t often that he doesn’t have to tell someone to get back. I appreciated his comments and thanked him for what he does. 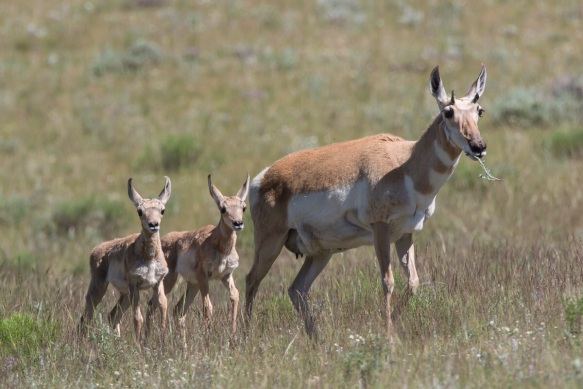 My favorite baby animal thus far has been the Pronghorn Antelope. Yesterday, one mother had twins following her through the sagebrush flats. Twins are actually normal for Pronghorn, but there is a high mortality rate to predators. The youngsters were so cute as they followed along in their mom’s footsteps. 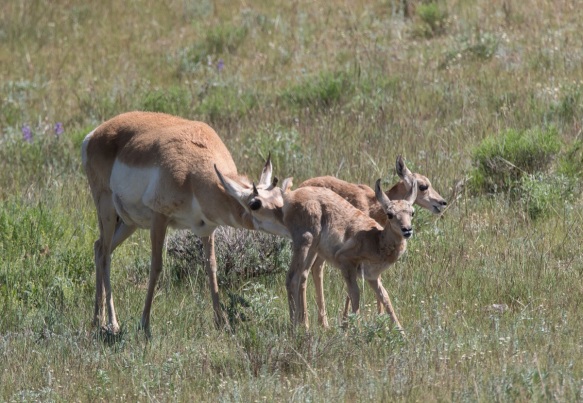 A mothers’ work is never done

Mother Pronghorns clean the droppings from their fawns’ rear end as a way to reduce scent that might attract predators.  Being a mother is never easy.

The mother often leaves the babies hidden in some sagebrush for long periods of time as she wanders off to feed.

This morning I saw a female with only one fawn. The baby laid down next to some sagebrush and the female and another doe crossed the road and started feeding several hundred yards away. It is amazing that they can relocate their baby in this landscape that looks so similar to our eyes.

I am looking forward to seeing what other new life greets me in the coming days.

1 thought on “Babes in Paradise”